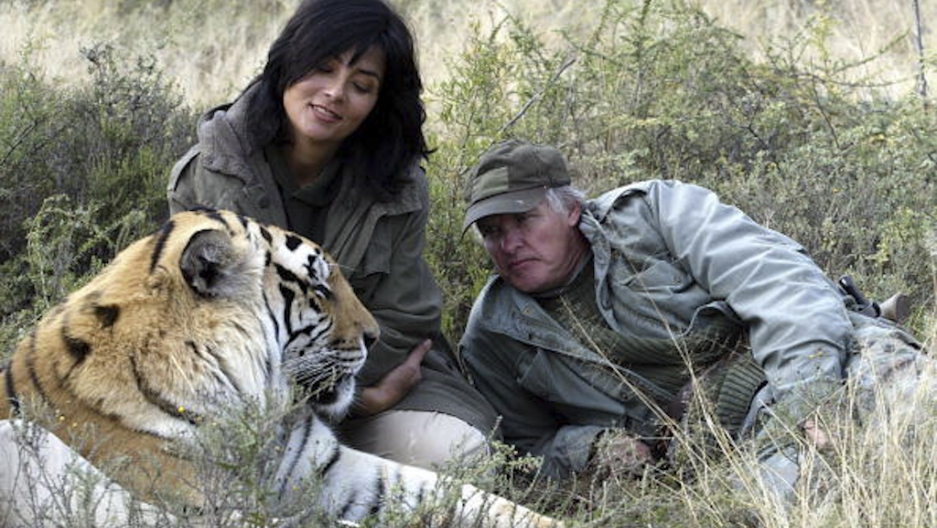 Gillian van Houten and partner John Varty play with Julie, an endangered Bengal tiger being rehabilitated to live in the wild, at the Varty family's tiger sanctuary in Philippolis, South Africa. Varty, a wildlife filmmaker and conservationist, was recovering in hospital March 29, 2012 after being attacked by one of his tigers.
Credit: ALEXANDER JOE
Share

JOHANNESBURG — John Varty, a wildlife filmmaker dubbed the "Tiger Man," has been seriously injured after being mauled by one of his tigers.

Varty was attacked while filming the endangered animals on his Tiger Canyons sanctuary near Philippolis in South Africa's Free State.

He was rushed to a hospital late Wednesday with several puncture wounds and two broken ribs.

Varty's brother told South Africa's EyeWitness News that he is recovering well after surgery at the hospital in Bloemfontein.

"We are pleased to announce that John Varty is out of theater at Bloemfontein Medi Clinic and is recovering from the incident which took place at Tiger Canyons yesterday," said a statement posted today on the sanctuary's website.

"The report from the doctor is positive, however, we anticipate that John will remain in ICU for 3 more days as part of the pain management medication. The doctor will closely monitor his condition... The danger of infection will also be closely monitored."

It is unclear what exactly happened. Die Burger newspaper reported that Varty was busy filming tigers when he was attacked.

Tigers are not native to Africa. But Varty established his Tiger Canyons sanctuary under a controversial plan to create a population of wild Bengal tigers outside Asia.