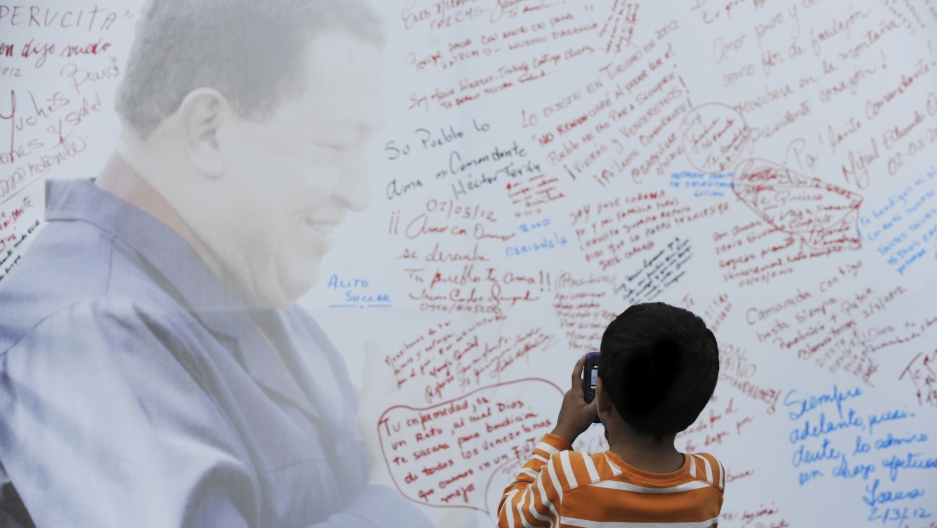 A boy takes pictures of a poster with the image of Venezuelan President Hugo Chavez in Caracas.
Credit: JUAN BARRETO
Share

Venezuela's President Hugo Chavez has returned to Venezuela after his first session of radiotherapy in Cuba, coinciding with the pope's visit to the Communist island.

"It's a hard battle," Chavez said on state television, broadcasting from his Miraflores presidential palace in Caracas, reports Reuters. "I'm good and will continue to be good. I've taken the treatment very well, thanks to God."

Chavez will be shuttling between Venezuela and Cuba most likely for the next month, he said. He is expected back in Cuba on Saturday to continue the treatment.

There was speculation that he would meet with the pope, keen on the lucrative photo opportunity for his domestic audience. However, no meeting took place Wednesday though the pope did meet with Chavez's ideological counterpart Fidel Castro in Havana.

Chavez has parried calls for a temporary leader to be named — keen to maintain his role as the face of Venezuela's government. "I may have reduced my speed," he said, "but the government has accelerated."

Chavez has always appeared as the face of the government. Supporters don't follow his party but him as the personality. Losing that identity would be a major blow to his popularity in Venezuela.

This would be especially worrying for the president as elections loom in October. His opponent Henrique Capriles Radonski is building up support and is making sure not to confront Chavez directly in order to pull in those slightly disaffected with the socialist president.

One recent poll put Chavez 13 points above Capriles. It was carried out by Datanalisis one of the country's more respected pollsters. The figures show that 44 percent of voters favor Chavez compared to 31 percent for Capriles.

Luis Vicente Leon, director of Datanalisis, says that around 36 percent of voters are undecided, the so called "ni-nis" (neither nors). It is those voters, he says, who will decide the election and so Capriles must be careful not to alienate them with angry attacks against the president.