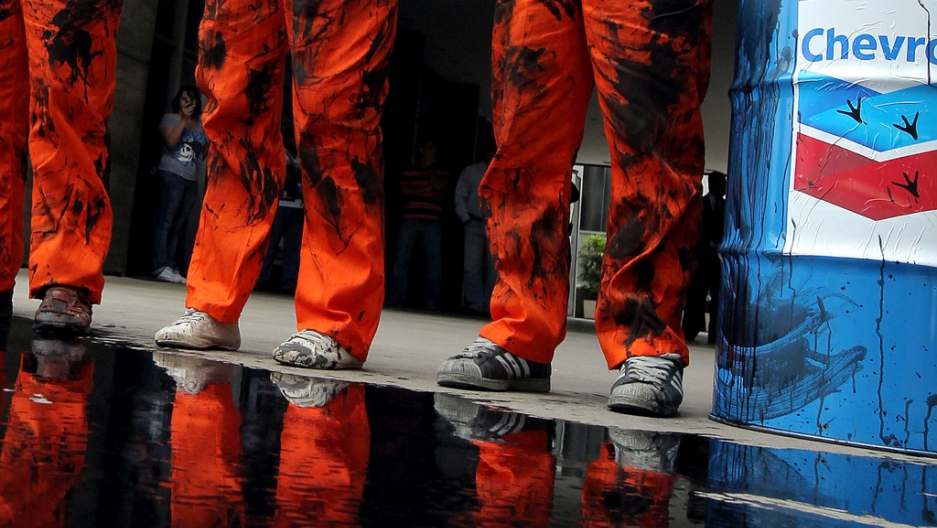 Federal prosecutors filed criminal charges last week against 17 of the firms’ in-country executives. Police seized their passports and demanded 1 million reals (over $546,000) bail for each of them.

The charges relate to an oil leak last November in Chevron’s offshore Frade field in the Campos basin. The field lies about 75 miles off the coast of Rio de Janeiro, in Brazil’s vast, sub-salt region, thought to have the potential to make the country one of the world’s biggest oil producers.

The leak seemed relatively minor: 2,400 to 3,000 barrels escaped before the well was shut off.

However, a political squabble erupted in its wake, fueling concerns that it may not be the spilled oil that leaves a lasting mark on Brazil — but the legal backlash itself.

The Federal Prosecution Office calls the leak an “environmental disaster.“

“The oil spill has affected the entire maritime ecosystem — possibly even resulting in the extinction of species — and it has impacted on economic activity in the region, as well as damaging property,” the prosecutors said in the filing.

More from Brazil: Why are dictatorship-era crimes above the law?

The charges include failure to follow protocols to contain the leak, altering documents, and failure to meet legal and contractual duties.

If convicted, the executives could face up to 31 years in jail. Each company has been ordered to pay a bond of R$10 million (about US$5.5 million), which would serve to pay for court costs, fines and damages should the charges be upheld.

Deepening the debacle, on March 15, just days before the charges were filed, a Brazilian Navy crew spotted sheen on the surface of the sea. More oil had seeped through cracks in Chevron’s field, prompting the company to halt production and adding more fuel to the fire raging against it.

Chevron spokesman Kurt Glaubitz told GlobalPost in a telephone interview the charges filed against the company are “outrageous and without merit.”

"Protecting the environment is … one of our primary concerns,” Chevron said in a statement on its website. “Continuous monitoring of the incident area shows no environmental impact to marine life. No oil reached Brazil's coast. No persons were harmed as a result of the incident, and there is no technical basis for assuming that there is any risk to human health.”

Chevron has been embroiled in legal trouble in Latin America before. It's been in a drawn-out court battle in Ecuador over allegations of environmental contamination and illnesses from oil extraction and dumping in the country’s rain forest.

More from GlobalPost: The Brazilian economy — what went wrong?

Rig owner Transocean took a similar stance, saying in a statement, “We strongly disagree with the indictments, they are without merit.”

Transocean was involved in drilling the well that blew out in the Gulf of Mexico in 2010, killing 11 people and spewing 200 million gallons of oil that caused widespread environmental devastation.

A report by Brazil’s oil regulatory agency, the ANP — released after the latest legal action — could help the companies’ case.

It said Chevron was not negligent with respect to the drilling that caused the leak in November, and that no discernable environmental damage had been done.

The federal prosecutors and police should have waited for the ANP’s technical report “before making their feelings known … neither of them is a specialist in the matter,” said Adriano Pires, an energy consultant and former ANP official.

Some industry sources say that the legal storm is a sign that Brazil’s government is taking an adversarial stance against international oil companies.

In 2010, Brazil passed a law to reduce competition against state-owned oil company Petrobras, which gives the company at least 30 percent stake in new oil consessions in the sub-salt region.

In Brazil, the police and prosecutors have “a track record of being somewhat overzealous,” said Christopher Garman, Latin America director for political risk analysts Eurasia Group.

“These are independent stakeholders being opportunistic … they are riding the political firestorm,” Garman commented.

When the November spill was reported, the ANP and the Brazilian Environment Agency handed the company combined fines of R$60 million (almost $33 million).

In December, Federal Prosecutor Santos de Oliveira brought a whopping R$20 billion ($11 billion) lawsuit against the companies and their directors.

Pires commented, “We are witnessing this huge overstatement which looks really bad for Brazil.”