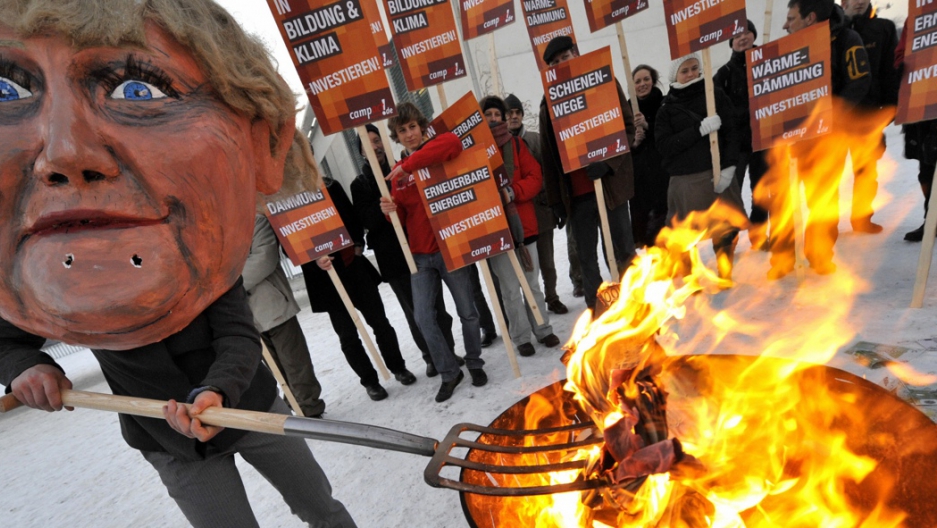 Some Germans still see the move as throwing more of their hard-earned euros on the fire.
Share

Despite something of a lull following the frenzied maneuvers to prevent a Greek default, the specter of contagion still looms.

As the 17 euro zone finance ministers prepare to meet in Copenhagen later this week, the focus has now shifted to exactly how much firepower is required to prevent the crisis from spreading to big economies like Italy and Spain.

Germany, the bloc’s paymaster, has long been reluctant to see the euro zone’s new permanent bailout fund increased beyond the agreed 500 billion euros.

This week, however, Chancellor Angela Merkel signaled that Berlin is open to boosting the firewall by allowing the temporary and permanent funds to run in parallel for a transitional period.

Under the current plans, the euro zone’s new permanent rescue fund, the European Stability Mechanism (ESM) kicks into gear on July 1, eventually replacing the temporary European Financial Stability Facility (EFSF) which is due to expire in June 2013. The two funds allow countries with top ratings to borrow money cheaply, and then lend to struggling countries that have seen their own borrowing costs escalate.

Merkel still opposes increasing the ESM, however. Other leaders’ have insisted that the fund’s firepower be bolstered to reassure markets.

Of the EFSF’s total capacity of 440 billion euros, 200 billion has already been committed to bailing out Greece, Portugal and Ireland. If that were to be subtracted from the new ESM it would leave a capacity of just over 300 billion euros, which is now widely regarded as far too little to restore confidence in the euro zone economies.

“There is a fear that something will happen and that the markets will think that the ESM is not big enough,” says Bert Van Roosebeke, senior policy analyst with the Center for European Policy, based in Freiburg. “They want to make this firewall credible.”

Berlin’s shift came after it found itself increasingly isolated within the euro zone and under pressure from global institutions such as the G20 and the International Monetary Fund, along with its major financer the United States. There is a reluctance to put up more money to help with the bailouts until the Europeans do enough themselves to tackle the crisis.

“The IMF and the Americans have made it clear that they want to have a bigger involvement of the euro zone states and of Germany in particular, of carrying the costs of these measures,” Van Roosebeke said.

While the combination of the two funds might be a significant concession by Berlin, concerns remain that even this will not be enough to stop the debt crisis from spreading.

On Tuesday Angelo Gurria the head of the Organization for Economic Co-operation and Development (OECD), said that the firewall needs to be at least 1 trillion euros in order to restore confidence. "When dealing with markets you must overshoot expectations," he said. "The mother of all firewalls should be in place, strong enough, broad enough, deep enough, tall enough — just big."

The international pressure comes amid fears that complacency is creeping in following a major injection by the European Central Bank of cheap loans into the European banking system.

The ECB move does not alter that fact that many European countries have unsustainable debt. Indeed Spain’s borrowing costs have recently crept above 5.4 percent as it becomes apparent that austerity is not working.

On Tuesday the latest data showed that Spain is now in recession, with its economy contracting for two successive quarters. The Bank of Spain said it expected the economy to shrink by 1.5 percent this year. With the highest unemployment rate in the euro zone, at 22 percent, the conservative government under Prime Minister Mariano Rajoy is struggling to bring down its deficit as income tax revenues decline.

Last month Madrid said that it would not be able to meet a previous deficit reduction target of 4.4 percent for 2012.

Read more: Spain and the Netherlands, a test in two parts

Germany has come in for criticism that it is pushing austerity in countries like Spain at a time when measures to boost growth are what is required. Yet, from Berlin’s point of view, the current policy is necessary to ensure that reforms are implemented that will prevent a recurrence of the debt crisis.

Merkel’s resistance to boosting the ESM itself is not only based on a desire to protect German taxpayers from further liabilities but also out of a conviction that the prospect of a massive bailout fund would dampen reform efforts in countries that might eventually need to be rescued.

“The German position has been, if we signal early on that you can have additional credit, then there will be less political will to bite the bullet and make the tough political decisions,” said Timo Klein, senior economist with IHS Global Insight in Frankfurt.

The reform efforts made so far by Rajoy and by Italy’s technocratic government under Mario Monti have certainly gone down well within the euro zone. “They have a decent amount of credibility, which was not the case with the predecessor governments,” Klein said.

Nevertheless, Berlin fears that if the ESM were massively ramped up, there would be no turning back if political circumstances were to change and less reliable partners came to power, which could leave Germany exposed, Klein argued. “Every bit that is conceded will be hard to claw back in the future if the conditions change.”

The difficulty for Merkel is balancing her responsibility to resolve the European debt crisis, with that of not putting German taxpayers on the hook for massive amounts of money, which they may not get back.

Merkel's spokesman, Steffen Seibert, said Wednesday to the Associated Press: "It is regrettable that apparently no figure is ever high enough in this discussion."

Yet, even though the bailouts are unpopular in Germany, Merkel’s own approval ratings are high, with voters impressed by her handling of the crisis.

Furthermore Merkel’s success in pushing through the fiscal pact — which will enforce a debt brake on most of the European Union, similar to the one already adopted by Germany — may have made it easier to sell a shift of policy on boosting the rescue funds.

Merkel’s often troublesome junior coalition partners, the FDP and CSU, have signaled this week that they back her stance on running the funds in parallel. The opposition Social Democrats (SPD) are also likely to back such a move.

Nevertheless, she may run into difficulties down the road.

Although the German parliament has already approved the rescue funds, it had capped Germany’s liability at a maximum of 211 billion euros. If the euro zone finance ministers decide on a bigger firewall in Copenhagen on Friday, then that liability is bound to increase significantly.