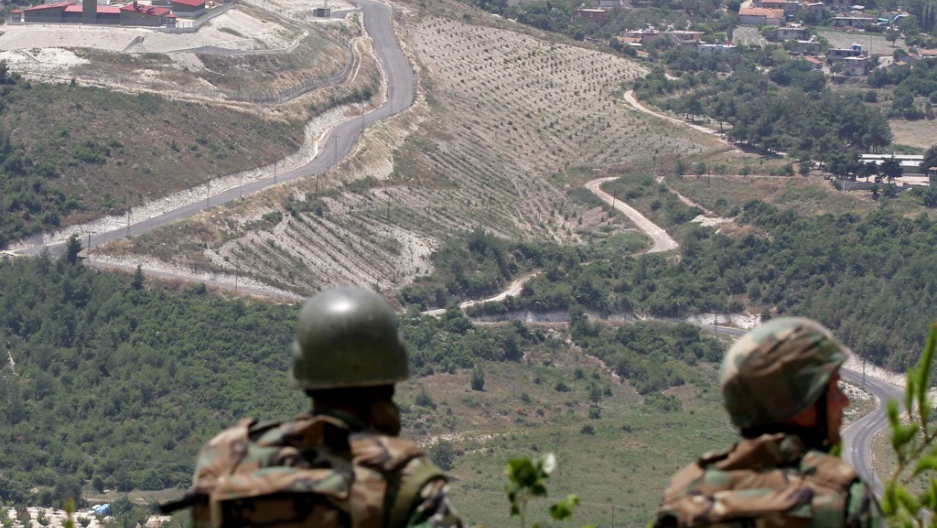 A picture taken on a tour organised by the Syrian Red Crescent shows Syrian soldiers deploying along the Syrian-Turkish border near the village of Khirbet al-Joz in the northern province of Idlib on June 29, 2011 as the number of Syrian refugees taking shelter in tent cities in Turkey decreased to 10,757 after several hundred people turned back home, Turkish officials said.
Credit: LOUAI BESHARA
Share

My colleague James Foley has an interesting report from Syria today that describes the regime's latest assault on a rebel-held city. Saraqeb, the second-largest city in Idlib Province, had been under full control of the Syrian rebels before the four-day assault began.

In a telephone conversation with Foley, who left Syria via the Turkish border on Tuesday after traveling in Idlib Province for two weeks, he said the assault appeared to unfold in much the same way earlier reports described attacks on other flash point cities, including Homs, indicating that Syrian forces were using a regular strategy to regain control of the country.

The strategy, Foley said, starts with the Syrian army. The army sends a column of tanks through the city center, launching precise attacks against rebel-held positions. Then a larger assault backed by snipers forces out any remaining Free Syrian Army fighters. Perhaps the most troubling part of the strategy, however, comes at the end after the city is back under government control. That is when the Shabiha, the plain-clothed operatives who act as President Bashar al-Assad's secret security force, begin patrolling the streets.

Activists told Foley, who witnessed the assault, that the Shabiha would go door to door, lists of names in hand, looking for anyone they suspected of participating in the uprising. The Associated Press reported earlier today that 40 people had so far been killed.

GlobalPost correspondent Hugh Macleod, who is based in neighboring Lebanon and has done extensive reporting from inside Syria, wrote a piece about the Shabiha last April, detailing their presence in the port city of Lattakia.

"They’re known to the locals of Lattakia as the ghosts — Al Shabeha — but when these phantoms dress up, it’s in black and their terror is tangible," Macleod wrote.

At the time Syria was gripped by widespread, but peaceful protests. The Free Syrian Army had yet to form and no armed opposition had arisen to challenge the regime.

"In a port city dominated by Sunni Muslims, which comprise three-quarters of Syria’s population, and surrounded by mountain villages that are home to Alawites, a minority that has ruled over the country for 40 years, these roaming gangs of black-clothed armed thugs have turned peaceful, united protests calling for freedom into violent, deadly chaos," he observed.

Obtaining firsthand accounts from Syria has been difficult. Unlike in Libya, rebels don't have enough control over any portions of the country that would allow reporters to move around in relative safely. Foley said he was mostly restricted to the towns and villages in Idlib Province, which is dominated by Sunni Muslims who are generally supportive of the rebels. He wasn't able to get close to the city of Idlib where a massive assault took place earlier this month.

Few journalists have risked entering Syria. And even fewer have gone in since the death or Maria Colvin, an American journalist working for the Sunday Times, in Homs in February. Most reports on Syria are based on accounts from Syrian activists inside and outside the country. While GlobalPost has had a steady string of correspondents working from Syria, none of them have been able to stay long for security reasons.