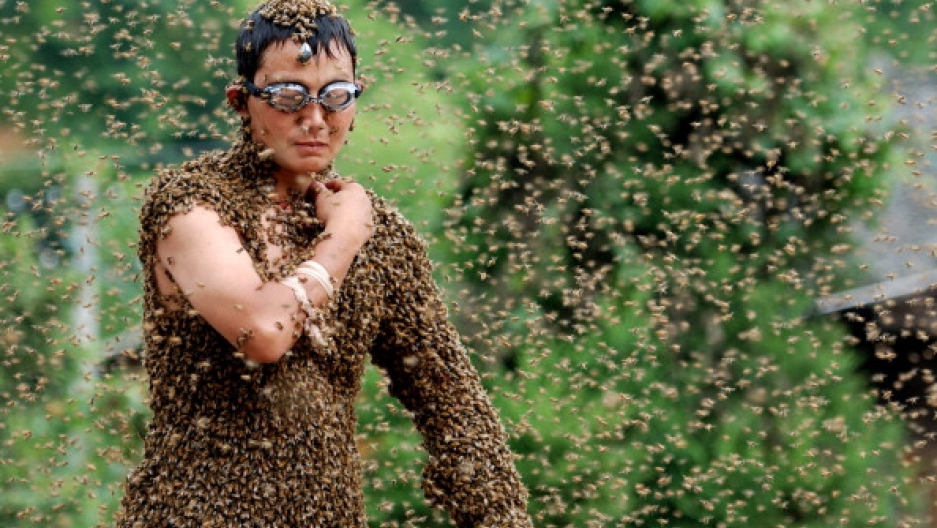 Have you ever wondered where all the bee colonies have gone in the last few decades?

Apparently, bee chastity is to blame.

Scientists at Wellesley College in Massachusetts have been trying to get to the bottom of the recent dramatic bee colony losses.

Bee numbers have been declining by at least 30 percent every year, according to the US Department of Agriculture, due to the mysterious Colony Collapse Disorder.

The researchers have come to a fascinating conclusion, Discovery News reports.

When you are a queen, you are best off being promiscuous.

When queens mate with multiple males their hives end up with greater genetic diversity and more robust communities of symbiotic bacteria living in the bee's guts.

Heather Mattila, an ecologist at Wellesley College, found significantly more gut bacteria in bees from hives where the queens partnered with multiple males.

The scientists wrote in a press release:

We’ve never known how healthier bees are generated by genetic diversity, but this study provides strong clues…Our findings suggest that genetically diverse honey bees have the advantage of broader microbial communities, which may be key to improving colony health and nutrition -- and to understanding factors that can mitigate honey bee decline.

Twelve benefited from a queen inseminated with a mix of 15 male bee's sperm. The other 10 had a chaste queen with only one mate.

Queen honey bees only mate once in their lives, so clearly, they need to maximize the action.

Boy, and is it some action. They should start naming S&M clubs after bees.

Get this: a bunch of drones flies up in a mating dance with the queen, but as soon as one manages to get into her panties, so to speak, the male's reproductive organ is torn off.

For some strange evolutionary reason this doesn’t discourage the other males. (Like with human males, is it because they also get dumber around females?)

The males wait patiently for their turn and happily remove their fallen predecessor’s phallus in order to mate with the queen, only to lose their phallus in the process.

The stored sperm from multiple partners is used to produce hundreds of offspring from that one wild dance party.

In the experiment, the initial artificial insemination was enough to last one queen a lifetime.

The promiscuous hives hosted 1,105 species of microbes with 40 percent more beneficial bacteria than the other group, Discovery News reports.

The monogamous queens' hives had only 781, as well as 127 percent more potential pathogens.

So, there, promiscuity is best for bees. Or, if you prefer, polyandry with a sadistic twist.

I'm not sure who's been teaching honey bees to practice monogamy the last few decades, but it needs to stop now.