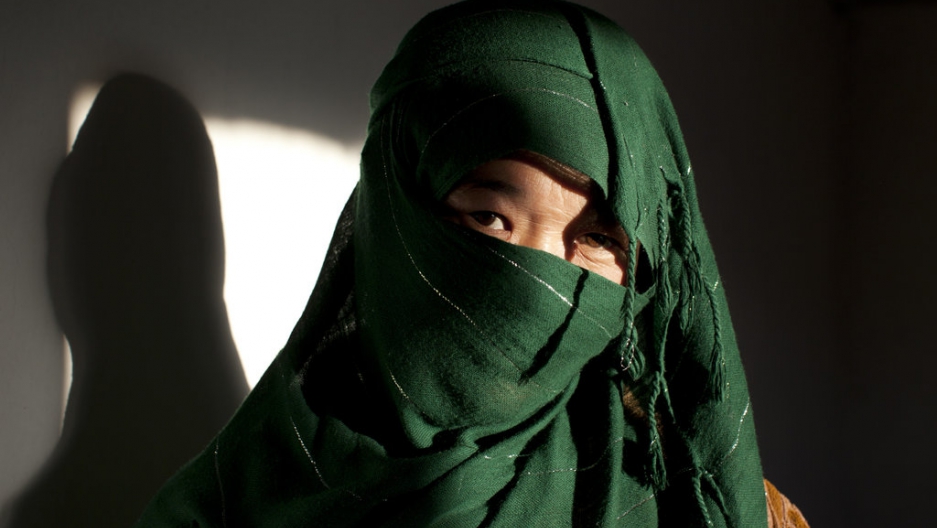 A battered 28-year-old Hazara woman hides behind her veil at a women's shelter October 8, 2010 in Bamiyan, Afghanistan. She came to the shelter after spending five months in prison. She was attempting to divorce her 50-year-old husband.
Credit: Paula Bronstein
Share

Sometimes things get so bad at home that a woman just needs to run away.

But in Afghanistan, a new Human Rights Watch report finds, running away from one's husband — even if he is abusive — is considered a "moral crime" punishable by time in prison.

"It is shocking that 10 years after the overthrow of the Taliban, women and girls are still imprisoned for running away from domestic violence or forced marriage,” said Kenneth Roth, executive director of Human Rights Watch. “No one should be locked up for fleeing a dangerous situation even if it’s at home."

As GlobalPost senior correspondent Jean MacKenzie reported earlier this month in a 'Special Report' titled "Life Sentence: Women & Justice in Afghanistan," the U.S. invasion has largely failed to bring Afghan women the freedoms heralded by American leaders in the early days of the now-waning war.

"In December 2001, the US-led offensive forced the Taliban to scatter over the mountains into Pakistan and the international community rushed into Kabul with the best of intentions," MacKenzie wrote.

"One of their primary goals was to reform the Afghan justice sector. And they waded in with a confidence bordering on arrogance, combined with a troubling disregard for the legal structures, however precarious, that were already in place."

Human Rights Watch conducted nearly 60 interviews in Afghan prisons and juvenile detention centers where women and girls are locked up for these "moral crimes." Because female members of families are routinely sent into dangerous situations through the practice of ba'ad, which settles community disputes by bartering women and girls, the victim often becomes the prisoner.

But the Taliban, which continues to hold substantial territory and could return to power after the American withdrawal scheduled for 2014, has no interest in granting equal rights to women.

Pulitzer Prize-winning foreign correspondent and columnist Joel Brinkley argues that even if the Taliban doesn't retake control of the country, women remain in grave danger under the current leadership.

Brinkley wrote in a column published Tuesday, "Now, with foreign forces about to leave, President Hamid Karzai and his crooked colleagues are already whittling away at half the population's rights — with complete impunity. This month the Ulema Council of religious bigots issued a ruling that permits men to beat their wives, forbids women to travel alone or mingle with men in public while also ordering them to respect polygamy. It flatly states that women are worth less than men."

Afghan feminist Malaloi Joya doubts the U.S. had any real intention of providing education, employment, health care or positions of power to women in the first place.

"The United States has tried to justify its occupation with rhetoric about 'liberating' Afghan women, but we remain caged in our country, without access to justice and still ruled by women-hating criminals," Joya wrote in her 2009 memoir "A Woman Among Warlords."

As the U.S. military prepares to go home, advocacy groups like Human Rights Watch and journalists like Jean MacKenzie and Joel Brinkley are acutely aware that the chance to leave these women's lives any better than they were before America arrived is slipping away.