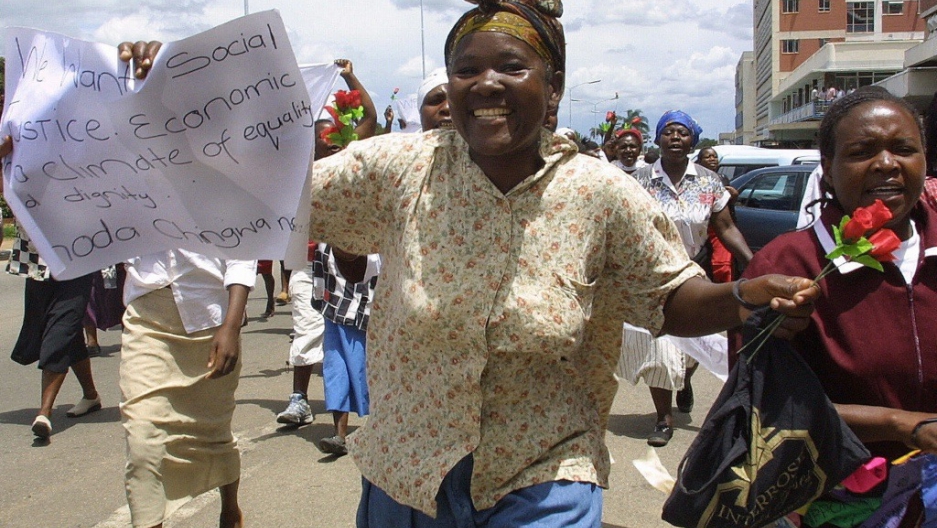 Women of Zimbabwe Arise (WOZA) protesters march through the streets of Harare, on Valentines Day, handing out roses to people, including police, and calling for love and human rights.
Credit: Stringer/
Share

She has been arrested more than 40 times and has been beaten, imprisoned without food or medical supplies and threatened with execution.

But she comes back for more. And she has a sense of humor.

Williams founded Women of Zimbabwe Arise (WOZA) which means "Come forward" in the Ndebele language. The group has thousands of Zimbabwean members who peacefully stand up for their rights, and are often beaten by police.

Her motto is "Tough love. The power of love can conquer the love of power."

No wonder Williams, 49, will be awarded Amnesty International USA' 2012 Ginetta Sagan Award for women and children's rights. The award is for activists who persevere for the rights of women and children, often at great personal risk and sacrifice.

Williams and fellow WOZA leader Magodonga Mahlangu every year have a Valentine's Day march where they hand out roses to the police who arrest them and sometimes beat them with truncheons. Under Zimbabwe's strict laws, no public gathering of more than 3 people is permitted without prior permission by police.

They march and get arrested on Mothers' Day, too.

"I am so proud to honor this brave woman who fights every day for the dignity and rights of women and children in Zimbabwe," said Suzanne Nossel, Amnesty International's USA executive director. "Few of us can imagine the risks she takes every time she leads a protest. Every time Jenni Williams is arrested and jailed Amnesty International activists all over the world stand with her to demand her freedom. As long as she carries on her courageous work, Amnesty International will be by her side."

This is not the first award for Williams and the women of WOZA. In November 2009, they got the Robert F Kennedy human rights award.

The Amnesty award was established to honor Ginetta Sagan, a resistance fighter in World War II, who was arrested and tortured. She was an early supporter of Amnesty and she died in 2000 at the age of 75.

Williams will receive a grant of $10,000 and will be speaking in the US as part of the award's intent to shine a light on human rights abuses.

Williams and the WOZA women is virtually the only group in Zimbabwe that regularly take to the streets to protest the Mugabe regime, which has committed widespread and systemic human rights violations, such as police beatings and torture. Many human rights organization warn that state violence is likely to increase in 2012, because Mugabe, 88 and in power for 32 years, wants to hold elections for another term in office.