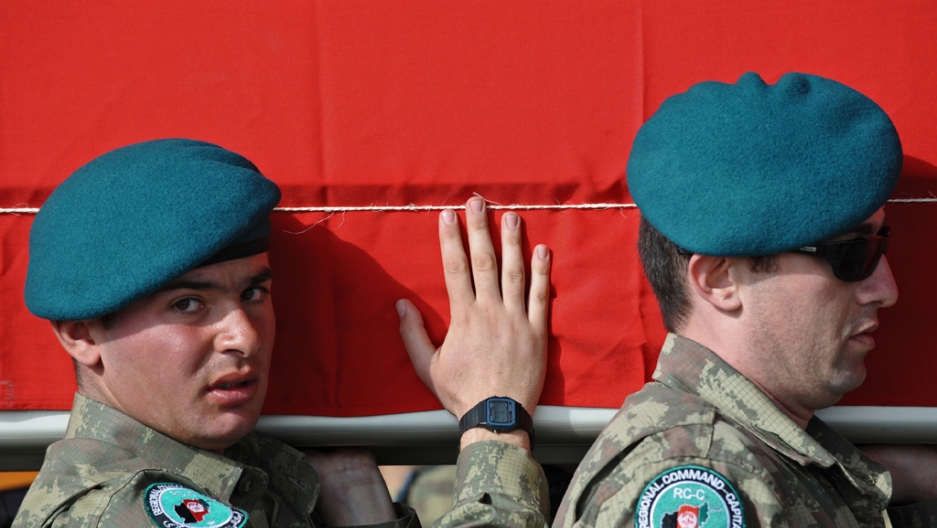 Turkish soldiers march while bearing the coffins of their fallen comrades, killed in a helicopter crash, during a ceremony at the Kabul International Airport on March 17, 2012.
Credit: Massoud Hossaini
Share

Turkey's homosexuals must go to humiliating lengths in order to get a "pink certificate," which exempts them from military service because of their sexuality, BBC News reported.

Military service is mandatory for all Turkish men, and they can only avoid it if they are ill, disabled, or homosexual, according to the BBC. Turkey's military hospitals still define homosexuality as an illness, according to the BBC, and use a document about sexuality by the American Psychiatric Association that dates back to 1968 as their guide.

"Doctors are coming under immense pressure from their commanders to diagnose homosexuality, and they obey, even though there really are no diagnostic tools to determine sexual orientation,'' a former military psychiatrist told the BBC. ''It is medically impossible, and not at all ethical."

However, though many army physicians realize the impossibility of "diagnosing" sexual orientation, they require men to answer questions, submit graphic photos, and take personality tests to qualify for the piece of paper that allows gays to avoid army service and dangerous deployments to fight Kurdish rebels, CBC News reported.

The requests for proof are not systematic, and are often up to the whims of military doctors, BBC reported.

Another gay Turk applying for a "pink certificate," Gokhan, came prepared with graphic photographs of himself having sexual intercourse.

"The face must be visible,’’ Gokhan told the BBC. ’’And the photos must show you as the passive partner.’’

Though the photos exempted Gokhan from military service (his certificate denotes him as having a "psychosexual illness") he said that the ordeal still haunts him.

"It's still terrible, because somebody holds those photographs," he said. "They can show them at my village, to my parents, my relatives.''

Turkey still struggles with its acceptance of the LGBT community, BBC reported.

"The social stigma associated with homosexuality in Turkey is such that outside the young and urbanized circles in big cities like Istanbul and Ankara, it is hard to imagine a man declaring that he's gay when he's not," wrote the BBC's Emre Azizlerli.

The Turkish government has also refused to support laws against discrimination, and allows politicians to make homophobic statements, the Huffington Post reported. Though the Ottoman empire legalized gay sex in 1858, Turkey does not recognize gay marriage or civil unions, according to Edge Boston. However, it has made other changes to conform to EU human rights policies, according to the Post.

Istanbul's Gay Pride Parade, which is the only march of its kind in a majority-Muslim country, will mark its 10th anniversary this year.