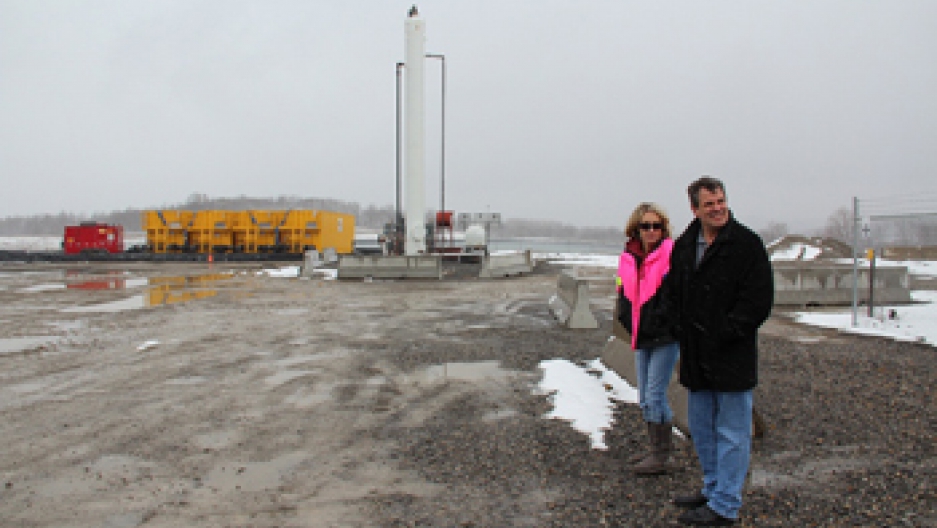 Researchers from the Colorado School of Public Health have spent three years monitoring fracking wells in the state. They recently discovered many are emitting potentially toxic substances into the air

The subtances include hydrocarbons including xylene, toluene, and benzene, a known carcinogen.

Lisa McKenzie, the lead author of the study, gathered ambient air samples around Garfield County, Colo., a center of natural gas production in the state.

"Our data show that it is important to include air pollution in the national dialogue on natural gas development that has focused largely on water exposures to hydraulic fracturing," McKenzie said.

In their report, the researchers said "air pollution caused by fracking may contribute to acute and chronic health problems for those living near natural gas drilling sites."

The findings in Colorado would seem to support residents in Pennsylvania who live near fracking wells and claim the drilling process has made them sick. But the evidence isn’t conclusive. In fact, an oil and natural gas industry group has mounted an aggressive campaign to point out what it says are flaws in the research. Simon Lomax, research director at the petroleum industry-funded Energy In Depth group, called the study bad guesswork based on bad assumptions.

"You can't make credible predictions about the future when you are just plain wrong about what's happening today," he said.

Among the group's specific complaints are that the study doesn't account for pollution generated by Interstate 70, which passes within a mile of the wells.

But the Colorado study isn't the only science out there raising questions about the safety of fracking.

Amy Paré is a plastic surgeon in Washington County, south of Pittsburgh, where over 500 wells have been drilled thus far. Paré specializes in cosmetic procedures — lifts and tucks, and breast implants. Two years ago, Paré started seeing patients with an unusual condition.

"We started to have more patients that would have open areas or recalcitrant lesions, that bled, ulcerated, didn’t quite heal. And usually they’re on your face," she said.

Concerned about skin cancer, Paré took biopsies of the patients.

It turned out many of these patients had one thing in common: They all lived near Marcellus shale gas wells. Paré asked her patients to take a urine test.

"Unfortunately we did find quite a few people that did have urine that had methane in it, toluene, and hippuric acid," Paré said.

All of which could have come from natural gas drilling. But discerning whether gas drilling is indeed the culprit, is a question doctors and health researchers are grappling with. Industry supporters point to studies that found no evidence that fracking pollutes groundwater, but a growing number of studies have documented people near gas wells are getting sick at an above-average rate. According to epidemiologist Jean Finkel at Weill Cornell Medical College, though, these studies too are not definitive.

"I am certainly not saying that these people don’t have something wrong with them, I’m sure they do," she added.

The problem, she said is there are many potential factors that could cause an illness. A headache could come from toxic fumes, but it could just as easily come from stress. What is needed are long term studies that look at a variety of questions

June Chappel of Hopewell Township, said fracking made her sick. Chappel leased her land for drilling, and the company she leased to, Range Resources, built an impoundment behind Chappel’s house to store water produced from fracking. At the time, Chappel’s husband, Dave, was suffering from cancer. He began to develop nosebleeds. She thought they were from his chemotherapy, then she started getting nosebleeds too and developed a ringing in her ears.

"I don’t know what my health is going to be," she said. "I was exposed to these chemicals for over a year. We had our windows open, I had a blue film on my mirrors. We were breathing this stuff in."

The Avolio family of Avella, Pa., on the other hand, believe the well on their property is perfectly safe. They're focused on the financial gains their family will receive.

"Our kids will say, hey, that’s ‘College’ out there. This is an incredible technology," Kathy Avolio said.

The Avolios don’t drink their well water, but they do have it tested every few months just in case. The water, Avolio said, is safe. The scene they see now in front of their house is one of economic prosperity. And their family is healthy.