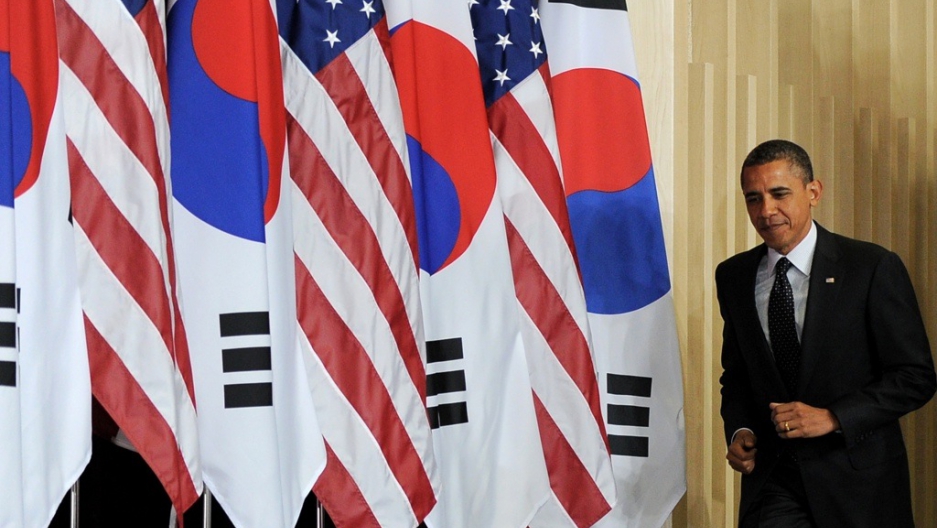 US President Barack Obama arrives to deliver a speech during a visit to Hankuk University of Foreign Studies in Seoul on March 26, 2012. Obama and dozens of other world leaders will begin the 2012 Seoul Nuclear Security Summit on March 26 curbing the threat of nuclear terrorism, but North Korea's atomic plans will be in focus on the sidelines.
Credit: Jewel Samad
Share

BOSTON — This week US President Barack Obama and 49 other world leaders will meet in South Korea to try to reduce the threat of nuclear terrorism.

But the Nuclear Security Summit which starts Monday has already been overshadowed by North Korea and its plans to launch a long-range missile in mid-April. North Korea says the missile is to send a satellite into space, but others warn that the Pyongyang regime is testing how far it could send a nuclear weapon.

Obama warned North Korea Sunday that it risks further sanctions and isolation if it goes ahead with its missile plan.

The summit is to consider ways to decrease the threat that nuclear materials could be acquired by terrorist groups. The agenda includes measures to control the circulation of a wide variety of radiological materials which could be used to make dirty bombs that spread radioactive contamination.

Despite the dramatic setting for the summit, next door to North Korea's threat, the world leaders are unlikely to reach agreement on converting all nuclear power stations so that they run on low-enriched fuel, according to experts. Nor is agreement expected on common standards for nuclear security because many nations find the measures restrict their national rights.

More from GlobalPost: US and Russia work together against nuclear threat

Annan, the former secretary-general of the United Nations, won an endorsement Sunday from Russia, which said his mission could be the last chance to avoid a protracted and bloody civil war. Russia has previously protected Syrian President Bashar al-Assad from international sanctions.

Now Annan is expected to go to China to try to persuade China to add pressure on Assad to stop using violence against Syrians protesting his rule.

In addition, Western and Arab officials are preparing for another "Friends of Syria" meeting to find ways to help the disparate opposition.

Sunday at least 65 Syrians died from government violence, according to reports.

More: US and Turkey may aid Syrian rebels

Pope Benedict XVI wore a sombrero, smiled and showed an unusually warm side that won over hundreds of thousands of Mexicans who crowded to his mass on Sunday. He also offered them a message of hope that their bloody drug wars would be halted.

Having wowed the Mexicans, what will Benedict do to score with the Cubans?

The pope goes to Havana Monday with a different agenda. Benedict wants to offer encouragement to the country's dissidents yet he also wants to improve relations with the historically atheist Castro government.

The pope's impending visit has already helped to ease tensions in Havana. The Cuban dissident group known as the Ladies in White held their weekly protest without incident Sunday on the eve of Benedict's arrival.

None of the Ladies in White were arrested at the march outside a Havana church nor were they heckled by the pro-government crowds that sometimes curse the women. Dozens of dissidents were briefly detained last weekend so this week's incident-free demonstration appears to be a truce.

Will Benedict succeed in improving relations between Cuba's two opposing sides, even temporarily?

Senegal's democracy will be looking stronger this week, after President Abdoulaye Wade conceded defeat to his former protege Macky Sall.

The move alleviated fears that Wade would attempt to prolong his 12-year rule.

Wade's concession was marked by celebrations in the streets of Dakar and is expected to go a long way toward reducing the tensions from a violent election season, in which at least six people dead were killed.

Senegal has long been one of West Africa's most stable and peaceful countries. But many worried that its election troubles showed that it, too, could fall to civil strife, such as the violence that Ivory Coast recently experienced.

Mali to find out what it new rulers are like

Also in West Africa, Mali will be finding out what to expect from the country's new military rulers, who came to power in a coup last week.

The mutiny by mid-ranking army officers Wednesday quickly swept President Amadou Toumani Toure from power. But it is not clear what has replaced him. And the whereabouts of Toure remain unknown.

Mali is fighting in the north against Tuareg rebels who want to establish an independent homeland. And the country is also facing a security threat from Al Qaeda in the Islamic Maghreb.

This week the west powers, especially the former colonial power France and the US, are expected to exert pressure on the new military junta to establish a route back to democracy.