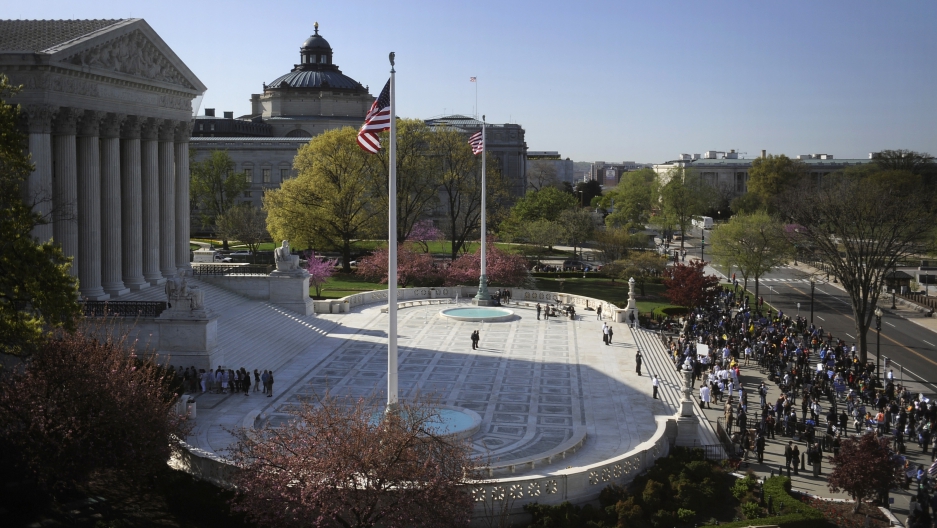 People rally on the sidewalk during legal arguments over the Patient Protection and Affordable Care Act at the Supreme Court in Washington March 26, 2012. The Supreme Court on Monday was debating whether it is valid under the constitution. (Photo by Jonat

Some 25 states and a record 136 organizations, including the Montana Shooting Sports Association, filed briefs with the U.S. Supreme Court in opposition to President Barack Obama’s landmark 2010 law to reform health care.

The Obama administration and several other groups, such as the Washington and Lee University Black Lung Clinic, field briefs in support of the law. The case started three days of oral arguments Monday with a full session in the morning and another one in the afternoon.

The case may be, as the Washington Post puts it, an opportunity for the court to “cut loose,” because court under Chief Justice John Roberts, is known as a hot bench, meaning they are unusually chatty during oral arguments.

There's a lot on the line for both sides — and the turnout Monday morning just reinforced that. Nurith Aizenman, a Washington Post reporter who listened to Monday morning's arguments, said the area in front of the courthouse was filled with activists from both sides.

At issue Monday is whether the case can even go forward. An obscure 1867 law says that tax laws can't be constitutionally challenged until the tax goes into effect. In this case, it's a provision of the healthcare reform law that requires those who don't obtain health insurance to pay a penalty — but that doesn't start until 2014.

"On this particular issue, both the Obama administration and those contesting the law agree that the case can move forward and this arcane law does not apply," Aizenman said. "The court actually appointed a private attorney to argue that this anti-injunction law does apply."

Aizenman said, based on the questions asked, the justices were having a hard time believing that they were barred by that law from reaching a decision on this particular case.

In a bit of a twist, the administration is arguing that the healthcare reform law is a tax, for the purpose of having authority to make such a law, but not a tax for the purpose of this law, Aizenman said. That, and the more broad and well-known interstate commerce clause of the U.S. Constitution, comprise the two primary arguments the Obama administration is making for why Congress has the right to enact the healthcare reform law.

The justices have already begun to at least foreshadow their feelings on the law. For example, according to Aizenman, Justice Stephen Breyer made a statement during arguments that just because something is collected in the same manner as a tax, doesn't make it a tax.