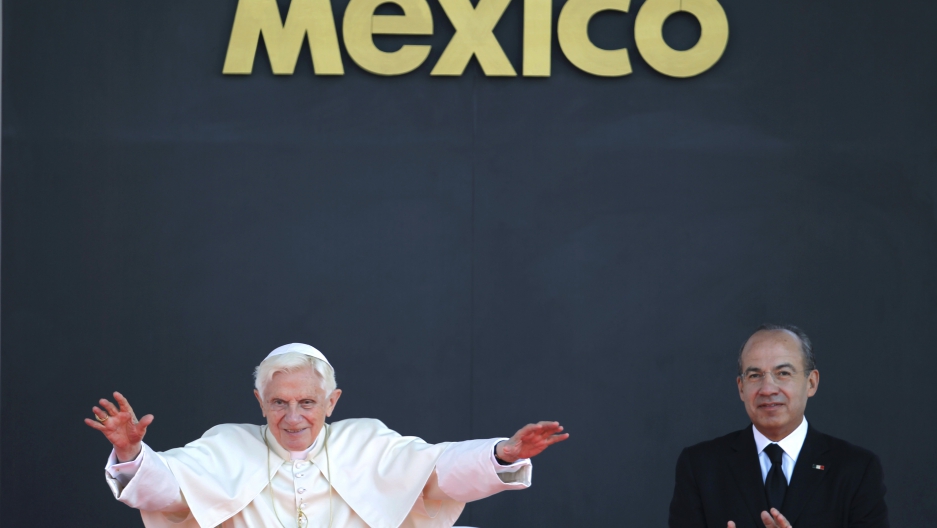 Pope Benedict XVI gestures next to Mexico's President Felipe Calderon before leaving for Cuba, at the Guanajuato airport in Silao March 26, 2012. Pope Benedict arrives in Cuba on Monday on a visit that has fueled aspirations for deeper economic and p

Pope Benedict XVI arrived in Cuba Monday after a three-day visit to Mexico — his first visit to either Latin American country.

During his visit to the Communist nation, the Pope said he hoped to build on the relationship with Cuba that was opened by his predecessor, John Paul II — whose visit in 1998 was considered a groundbreaking development.

Sarah Rainsford, Havana correspondent for the BBC, said the pope should expect a very warm response on the island.

"This is a country that is often very politically isolated and I think the visit from the pope is a huge moment for the country," she said. "It puts Cuba in the international spotlight. For the Catholics here, for the Catholic Church in Cuba, it's enormously significant. This is a church that has been regaining ground very slowly ever since that visit from John Paul II in 1998."

Benedict didn't exactly endear himself to the Cuban government on Friday when he declared the Marxist ideology had failed, and urged Communist governments to find new models of governance. But Cuba's foreign minister had a measured response, Raindford said, saying they respected everyone's right to an opinion, but in Cuba they felt Communism had led to a just and democratic society — and one where reforms are being implemented.

"The church has spoken out inside Cuba many times in the past, talking about the need for those reforms to go further and to go deeper and has said it will accompany and advise the Communist government and society in that process," Rainsford said.

Rainsford said Benedict won't be meeting with any dissidents during his trip, though the government has been taking a somewhat lighter hand toward them in advance of his visit.