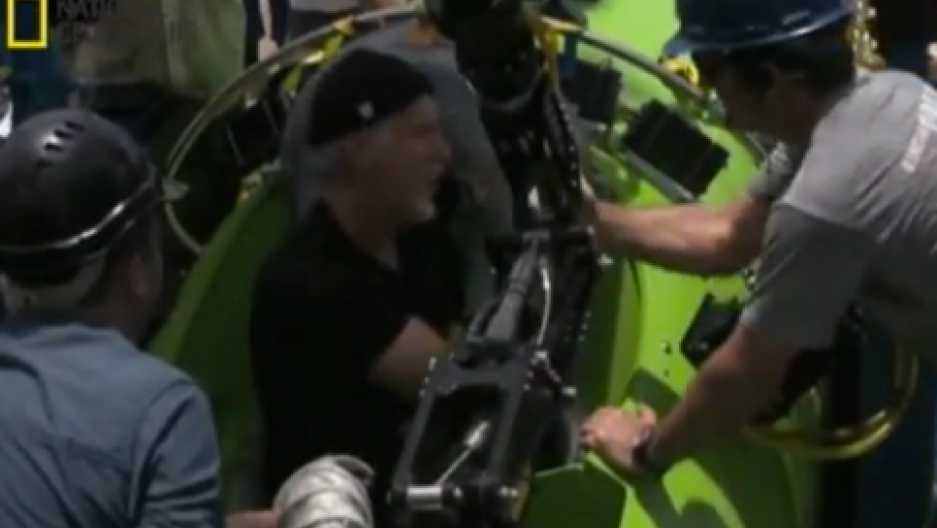 James Cameron used a specially designed submersible to travel to the bottom of the Marianas Trench — the deepest point known to exist in Earth's oceans. (Photo from AP video.)

Director James Cameron is back on dry land after travelling to the deepest point known on Earth, some seven miles below the surface of the ocean.

He's the first person to make the dive alone, and he spent about three hours there collecting research samples and taking pictures — in a specially designed submersible that he envisioned himself. It was revolutionary in many ways, not the least of which is that it moves up and down, generally, rather than forward and backward.

Even with all of the innovations, though, it took nearly two hours to reach bottom.

Jon Copley, a marine biologist at Southampton University in the U.K. who has done deep dives of more than a mile, said these sorts of journeys are really a lot like visiting another world.

"The landscape down there looks so alien to us because it's shaped by forces that are very different to the weather that shapes the landscape we're familiar with above the waves," Copley said.

The entire landscape is pitch black, except for what can be illuminated by the lights on the dive vehicle.

Cameron, upon emerging, described it as the "most isolated, remote place on the planet."

Copley said the sort of celebrity deep sea drive that Cameron pulled off draws attention to all the work that scientists still need to do under the water of the ocean.

"More than half our world is covered by water more than two miles deep," Copley said. "We don't even have an accurate map of that half of our own planet. What goes on down there is very important to us and affected by us."

Copley also hailed the construction of the submersible Cameron used as finally giving the world's scientists another vehicle that can travel to the deepest part of the Earth. That's in addition to new robots that can also make the journey and are just coming online.

The two types of vehicles, human-carrying and remote operated, do different things, Copley said. The best computer we have, he pointed out, is the human brain and the best camera, is the human eye. So nothing can beat being able to supplement robot research with human observation.

"We're starting to build a better toolkit to reach into the ocean's depth," Copley said. "There's space for both. In many cases we need both in the exploration of the ocean."