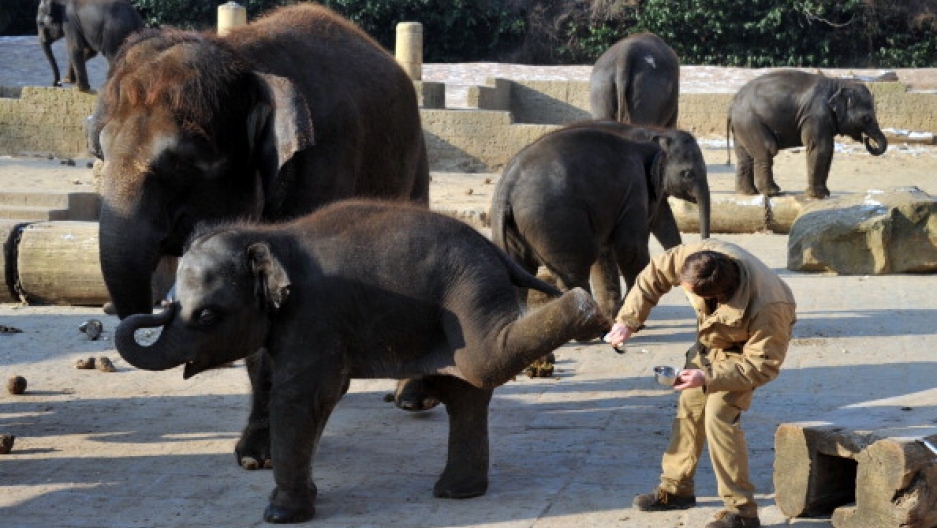 It works the way it sounds.

A probe is inserted about three or four centimeters into the lower intestine, near the gonadal nerve center.

This is then stimulated with a 5 to 15 volt charge that causes a contraction of the entire reproductive tract, which leads to the sperm being forced out.

According to Thomas Hildebrandt of Berlin’s Institute for Zoo and Wildlife Research, this is an established medical method for paraplegic men that's been used for 25 or 30 years.

He now performs the procedure on wild elephants.

Because elephants in captivity are getting too inbred, which is why every couple of years Dr. Hildebrandt takes off for South Africa searching for potentially fertile wild elephant bulls, The Local reports.

So far, it sounds like a fairly fun job.

But here is where things get a bit messy.

Once a fertile elephant is identified, Hildebrandt shoots it with a dart.

The powerful anesthetic in the dart triggers a muscle contraction that causes the elephant’s 1.5 meter (five foot) long penis to retract into its cavity and, apparently, it takes some teasing out.

Hildebrandt explains to The Local this way:

The problem is, in order to extract the sperm hygienically, we have to get the tip out and clean it.

How they get the tip out, the report doesn't say and, frankly, we probably don‘t want to know.

Once they get it out and extract the semen, they immediately freeze it, and later thaw it and test for various diseases.

So far, no elephant cow has yet been successfully inseminated with sperm that has previously been frozen.

But they are working on it.

It’s not exactly a cheap way to breed.

It reportedly costs some $130,000 to obtain, transport and quarantine three liters of elephant sperm, or enough to impregnate roughly 65 elephant cows.

One ejaculation is about 100 ml, or enough to fill a standard champagne glass, if you prefer to imagine it in concrete terms.

So, it sounds like unless Dr. Hildebrandt can teach wild elephants to do the trick with JC Penney catalogs, there are plenty of electro shocks coming their way.

Either that or a lot of inbred elephants.