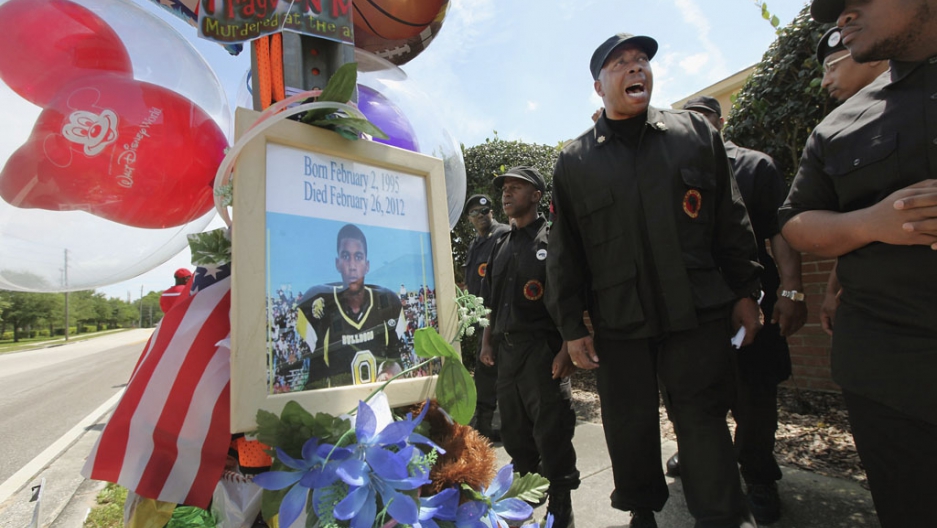 Members of the New Black Panther Party rally next to a Trayvon Martin memorial in Sanford, Fla., today. The New Black Panther party said it is calling for a mobilization of black men to search for and arrest George Zimmerman, the neighborhood watch volunteer who admitted shooting and killing Martin. The group offered a $10,000 bounty for Zimmerman's capture.
Credit: Mario Tama
Share

The group also called for 5,000 black men to mobilize and search for Zimmerman, the Neighborhood Watch volunteer who said he shot Martin in self-defense on Feb. 26.

“An eye for an eye, a tooth for a tooth. … If the government won’t do the job, we’ll do it,” NBPP leader Mikhail Muhammad said during a protest in Sanford, Fla.

On its website, the group showed a poster that read “Wanted! For the murder of Trayvon Martin … Alive, not dead or harmed,” Agence France-Presse said.

The NBPP has no connection to the Black Panthers of the 1960s and ’70s, AFP said.

Muhammad also said black athletes and entertainers are donating cash to the cause, and the group hopes to raise $1 million.

Martin was walking home at the time, and police said he carried nothing more than candy and soda.

The 28-year-old Zimmerman had a permit to carry the gun, and wasn’t charged under Florida’s “stand your ground” law.

The lawyer who offered him legal advice said Zimmerman – a white Hispanic – isn’t a racist.

Craig Sonner told CNN that Zimmerman has volunteered as a mentor for 2 black teens, and supported a fundraiser for an African-American church.

“I asked him, ‘Are you a racist? Do you have anything against black people?’ and he said ‘No,’” Sonner said. “I do not believe that's the indication of a person who’s a racist.”