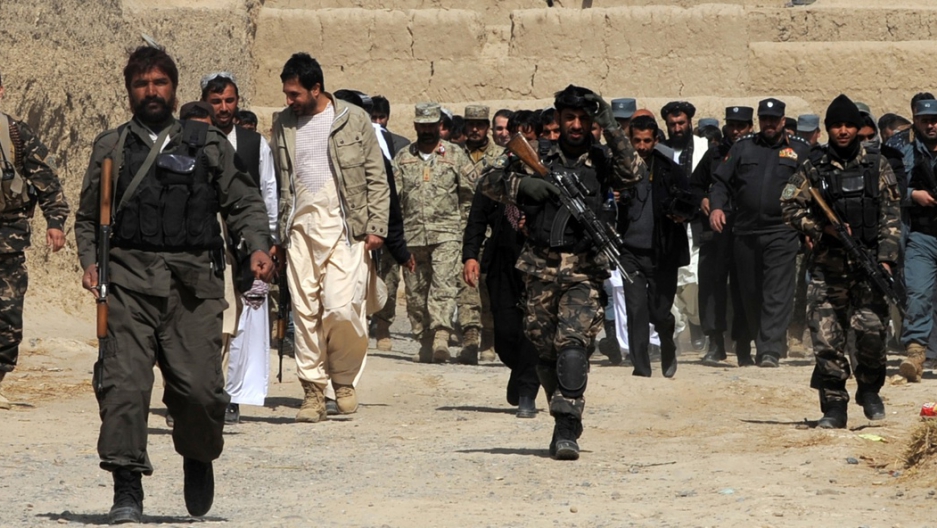 An Afghan delegation walks with locals after a memorial ceremony in Alokozai village in Kandahar province on March 13, 2012, two days after at least 16 innocent Afghan civilians were shot and killed by at least one US soldier.
Credit: Jangir
Share

There are still many questions surrounding the horrific massacres in Afghanistan: did Staff Sgt. Robert Bales, now formally accused of 17 murders, act alone? What could make someone snap so suddenly and completely? Is the US military to blame for not screening their soldiers properly?

One thing, however, is becoming clear: the US war effort in Afghanistan is drawing to a painful and shameful close.

Ever since the rampage in Kandahar on March 11, the airwaves, newspapers and web pages have been devoted to a harsh reexamination of our goals and accomplishments in Afghanistan.

The results are disheartening. Very few can articulate what the mission was, how much has been accomplished and what remains to be done.

More from GlobalPost in Kandahar: Eyewitnesses describe the Kandahar shooting

Maj. Gen. John Allen, the top NATO commander in Afghanistan, tells us that we are still “on track,” but on track to what?

Sgt. Bales will have to answer for his actions, should he be proven to have committed the reprehensible murders. But much more is on trial here: namely, the entire decade-long effort in Afghanistan.

The United States has long since lost its “Good Guy” status in Afghanistan. For many years, US troops have been seen primarily as occupiers, not the liberators that we originally cast ourselves to be.

After the massacre, Afghan President Hamid Karzai, known for his emotional outbursts, labeled Americans “demons.” He has also threatened war on NATO, and said he might join the Taliban.

Few take his tantrums seriously any more — Karzai is almost totally dependent on American protection and largesse for his power.

But his latest barbs, especially his heartfelt statement to reporters in Kabul that the Kandahar killings were “by all means, the end of the rope,” have found resonance in an American public that is heartily sick of the war effort in Afghanistan.

People in the United States were deeply shocked by the killings, while Afghans accepted them as par for the course, despite the horrific toll and number of women and children killed. They see little or no difference between what happened in Kandahar on March 11 and what happens on many nights in that part of the country.

Night raids are a frequent occurrence in southern Afghanistan. The United States insists that they are one of the military’s most effective weapons against the “enemy.”

Karzai has demanded that the raids be stopped. He insists the US reluctance to relinquish control over the operations has held up the much sought after Strategic Partnership Agreement between Kabul and Washington. Now, for the first time, the United States has indicated it might be prepared to hand over a bit more power to the Afghans.

In a study for Inter Press Service in 2010, Gareth Porter showed convincingly that the raids are all too often based on flawed intelligence, targeting the wrong people.

Up to 80 percent of those detained in night raids are later released; those who are killed, however, have no recourse.

The military is not fond of those who report on night raids, as I can attest from personal experience.

In December 2007, I was training Afghan journalists in Helmand, a volatile southern province next to Kandahar. Two reporters in the capital, Lashkar Gah, claimed to have news about a night raid in Garmsir district. US soldiers had broken into several homes and killed civilians. They had sprayed bullets and slashed throats, leaving at least 15 people dead.

I was reluctant to believe that American soldiers could have been so brutal.

But one of the journalists had interviewed a survivor, Abdul Manan, who was in the Emergency Hospital in Lashkar Gah. The reporter spoke to a doctor who had stitched the man’s throat back together.

Abdul Manan’s tale was a terrible one: soldiers had broken into his home, killed his two brothers and had tried to kill him. They had not severed his jugular, however, so he lay beside his brother, feigning death, until the soldiers left. He then crawled to a neighbor’s house and was taken to the hospital.

Several other homes were targeted that night and villagers said that some of those killed were women and children.

Given its sensitivity, we checked the story out as much as possible. We interviewed neighbors, hospital personnel, and government officials. While many refused to go on the record, they all confirmed the story. Helmand was then under the control of British forces; officers at the Provincial Reconstruction Team (PRT) in Lashkar Gah insisted vehemently that they had had no part in the raid. We surmised, but could not prove, that US Special Forces carried out the operation.

I personally interviewed Gen. Dan McNeil, commander of the International Security Assistance Force (ISAF) in Afghanistan. He did not deny that the raid had taken place, but insisted that no soldiers under his command were responsible.

At the time, US Special Forces did not fall under ISAF. They reported directly to the Pentagon.

“If you want to know what happened in Garmsir, ask the people who did it,” he said. When I asked whether he was referring to US Special Forces, his cryptic reply was, “Why ask me questions you already know the answer to?”

The reporters published the story, and a few things happened in rapid succession: they were thrown in jail by the chief of police in Helmand province, but released after a few days; I was told by a British Foreign Service officer in Helmand that I was “no better than an enemy combatant” for encouraging reporters under my tutelage to cover such topics; and the journalism training project I headed, which was funded with British government money, was canceled. Despite efforts by the Washington Post, the story was never covered. And in the future, other such operations would go unreported.

We would like to think that all operations mirror the raid that killed Osama bin Laden: swift, precise, effective.

But all too often they go awry, giving us the killing of pregnant women in Paktia; the shooting of nine boys gathering firewood in Kunar; the bombing of a wedding party in Jalalabad that killed dozens, including the bride; an airstrike in Herat that killed more than 90 people, most of them civilians.

Then there are the “rogue” acts: the desecration of Afghan corpses by US soldiers; “kill teams” that murdered Afghans for sport, and the latest rampage in Kandahar.

There are, very possibly, many more such incidents that are not known. Like the raid in Garmsir, the facts may never have been fully exposed.

The military can argue, with some justification, that these are isolated cases, regrettable by-products of war. But when their wives and children die, Afghans see little difference between accidents and murder.

Americans want to believe that the killings in Kandahar were a horrible departure from the conduct of Afghan operations. But for the Afghans they form an integral part of the dreadful litany of a terrible war.