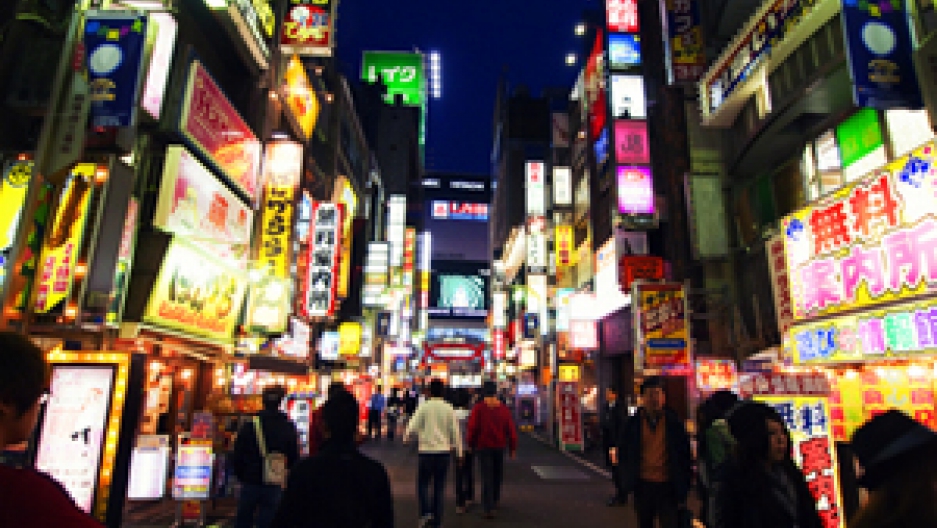 Even if you've never been to Tokyo, you've probably seen its iconic boulevards of neon. They light up the city's famous Shinjuku and Ginza districts, and sometimes seem bright enough to light up the entire world.

In the days after last year's crisis at the Fukushima Daiichi nuclear power plant, though, these boulevards largely went dark. They lost their supply of electricity from Fukushima and elsewhere, as the triple meltdown there triggered a nationwide power crisis.

A year later, Tokyo's lights are back on, but the way many Japanese think about the electricity that runs them may have changed for good.

Hironao Matsubara, of Tokyo's Institute for Sustainable Energy Policies, says before Fukushima, the Japanese didn't think much about the country's energy sources.

"We can use energy very easily," Matsubara says of the pre-disaster attitude. "Just switch on. But after the accident we start to think about our source of the energy."

The Fukushima disaster made many Japanese deeply skeptical of nuclear power. Japan's 54 reactors used to generate about 30 percent of the electricity here. But safety concerns have shut down all but two, creating a huge gap in Japan's power supply. Matsubara says over the last year that shortage has been filled through a combination of conservation and firing up old conventional plants that burn imported coal, oil and natural gas. And the government is assessing the possibility of bringing some of the shuttered nuclear plants back online.

But over the long haul, Matsubara says, there's only one viable option.

"We have no fossil fuels," Matsubara says, "and also nuclear power is very high risk. So renewable energy is the final solution for our society."

The question is how to ramp up renewables fast in a country that until last year had staked most of its energy future on nuclear power. Today, renewable sources only account for about two percent of Japan's electricity. Matsubara says the country has enough wind, hydro, solar and geothermal resources to meet all of the country's energy needs by mid century. But that doesn't help in the short term, and Japan is facing potential blackouts this summer.

It's a big challenge, but, according to Rikkyo University energy policy expert Andrew DeWit, also a big opportunity.

"The greater the challenge," DeWit says, "the more painful the conditions are that you're confronting, the stronger are your incentives to innovate as rapidly as possible."

Incentives to make a quick transition are already materializing. After Fukushima, the Japanese government pledged to get 20 percent of the country's electricity from renewable sources by 2020. The government has also allocated more than seven billion dollars in this year's budget for renewable energy and conservation projects. And it has approved new subsidies to encourage private investment in green energy. One Japanese telecommunications giant is already responding with plans to build more than 14 megawatts of solar electric capacity.

And then there's the opportunity created by the need to rebuild hundreds of communities hit by last year's earthquake and tsunami. In places like Kamaishi, 350 miles northeast of Tokyo, renewable energy is at the forefront of reconstruction plans.

Kamaishi official Takahiro Sasa says biomass from thinning the area's forests could meet nearly a quarter of his city's energy needs. Add to that solar panels on every new building, the potential for tidal power, and a major expansion of the town's existing wind farm, and Sasa says Kamaishi could become a lot less dependent its big nuclear utility.

Elsewhere in the disaster zone there are plans for four new biomass plants to burn roughly five million tons of wood debris from the tsunami. But these won't be online for at least two years, and the rest of the promised renewable energy economy will take even longer. That's why economist Martin Schulz with the Fujitsu Research Institute in Tokyo says it's crucial that Japan also learn to use less energy.

"Japan's future over the next years will most likely depend on how energy efficient" it is, Schulz says, on "how much Japan will be able to become more productive with the energy sources it already has."

Schulz says Japan has tremendous room for quick gains in energy efficiency especially in housing and industry. But he says doing this would require a major shift in political culture.

Schulz says this is because" Japan developed so fast during its industrialization. All the mindset is just adding new supplies, and so far, he says, that mindset still hasn't changed much. Despite all the talk about renewables and efficiency here, Schulz says nearly all of the investments in new energy projects since Fukushima have been in conventional generation.

And then there's the question of Japan's nuclear industry itself, an industry that includes both companies that operate nuclear plants and companies that design and build them. Rikkyo University's Andrew DeWit says the industry has no intention of giving up its huge share of the two hundred billion dollar Japanese electricity market, the third largest in the world.

The tension was on display just this month, when the mayors of three major cities, Kyoto, Osaka and Kobe, called on their local utility to provide a specific timetable for phasing out nuclear power. The move came after the utility defended nuclear energy and only provided general assurances that it would pursue renewables.

The government has been sending similarly mixed signals. This despite what seems to be strong anti-nuclear sentiment among the Japanese people. A poll conducted this month found that 80 percent of Japanese want to phase out nuclear power.

Ultimately, DeWit says the momentum is building, and a new energy economy is all but inevitable here.

DeWit says "that structure of vested interests is in eclipse" over the long haul. "The question is how quickly does that process happen."

Like so much of Japan's recovery over the last year, change has been slow to come. But there are signs that the country is moving in a new direction. Just look at Tokyo's giant electric billboards. When they came back on after last spring's disasters, many of them had had their neon bulbs replaced with energy saving LED's.