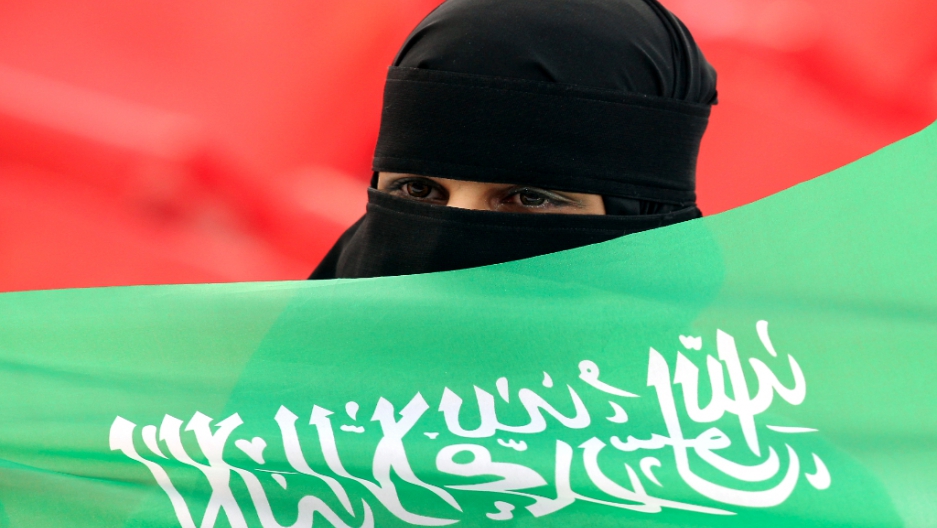 A Saudi football fan cheers for her team before the start of the 2011 Asian Cup group B football match between Jordan and Saudi Arabia at Al-Rayyan Stadium in the Qatari capital Doha on January 13, 2011.
Credit: Karim Jaafar
Share

Saudi reports say Crown Prince Nayef bin Abdul Aziz has given his blessing to sportswomen seeking to represent the conservative country at the upcoming summer Olympic Games in London, according to the Associated Press.

The Olympic event would be the first for Saudi female athletes, who often struggle to access basic training and equipment in a highly traditional country.

Prince Najef, the nation's hyper-conservative heir-apparent, said female athletes can participate provided they “meet the standards of women’s decency and don’t contradict Islamic laws," according to a report from the UK-based, Saudi-owned Al-Hayat newspaper.

Meanwhile, the International Olympic Committee (IOC) described as a very "constructive" a recent meeting with Saudi officials, issuing a statement saying the IOC is "confident that Saudi Arabia is working to include women athletes."

An article in Middle East Online paints things differently, describing the move as "part of a concerted government effort to fend off a possible popular uprising in the kingdom" similar to the Arab Spring unrest "by catering to youth sentiments and growing female demand for sporting opportunities."

Such demands are partly the work of agressive awareness-raising campaigns by groups like Human Rights Watch. Christoph Wilcke, a researcher for the group's recent report on discrimmation faced by female athletes in Saudi Arabia, said the Prince's move doesn't get conservative Islamic nation off the hook.

“You cannot pull a token woman out of your hat to say everything is hunky-dory,” Wilcke told The LA Times today. “This is a good step -- but we need to start a sporting culture for women in Saudi Arabia.”

Saudi reports say their female athletes are likely to gravitate toward sports like riflery or horseback riding, according to the LA Times.

CNN wondered if Saudi women would be able to make the Olympic grade given the difficulties faced by apsiring sportswomen there. Saudi girls in state schools are not enrolled in physical education courses, Human Rights Watch pointed out, while boys are.

Reuters described the country's position on female sportsmanship by quoting the head of its Supreme Council of Religious Scholars, who earlier worried that the excessive "movement and jumping" of sports activities might tear girls hymens and lose their virginity.

The IOC says it is assessing a list of female Saudi candidates and will issue a formal proposal in coming months.

Saudi Arabia, Qatar, and Brunei are the only three nations in the world that have never sent female athletes to the Olympic Games.

Qatar has also announced that it will allow females to compete in the upcoming games, according to ESPN.