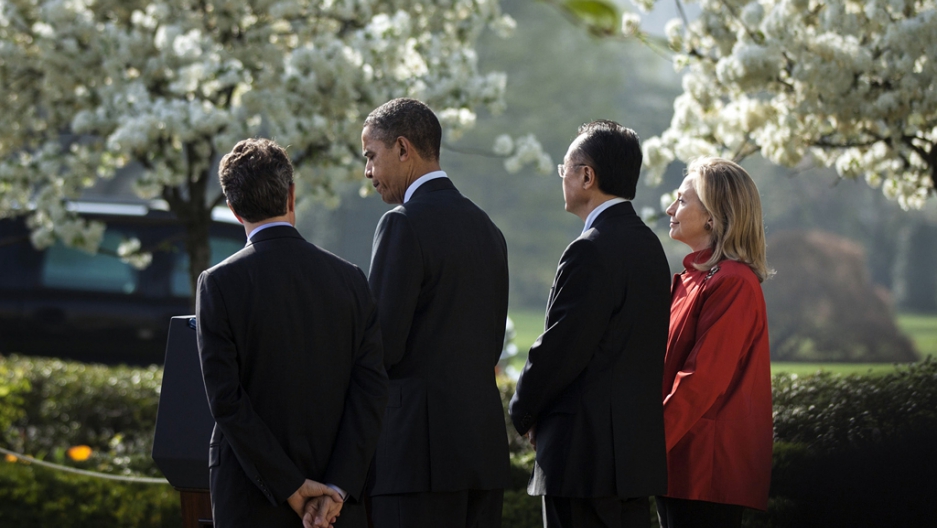 Secretary of the Treasury Tim Geithner, Dartmouth College President Jim Yong Kim and Secretary of State Hillary Clinton listen while President Barack Obama speaks in the Rose Garden of the White House on March 23, 2012 in Washington, DC. President Obama was announcing the nomination of Kim to the World Bank post, but used the opportunity to call for some soul-searching after the Trayvon Martin case.
Credit: BRENDAN SMIALOWSKI
Share

President Barack Obama called for national soul-searching on Friday morning as he took a moment to address the Trayvon Martin case in personal terms.

While speaking at the White House Rose Garden, Obama commented for the first time on the shooting in Florida of an unarmed, 17-year-old black teenager by a neighborhood watch volunteer who has said he thought the teen looked suspicious.

The Associated Press had his comments:

"I can only imagine what these parents are going through. And when I think about this boy, I think about my own kids. And I think every parent in America should be able to understand why it is absolutely imperative that we investigate every aspect of this, and that everybody pulls together — federal, state and local — to figure out exactly how this tragedy happened.

"So I'm glad that not only is the Justice Department looking into it, I understand now that the governor of the state of Florida has formed a task force to investigate what's taking place. I think all of us have to do some soul-searching to figure out how does something like this happen. And that means that examine the laws and the context for what happened, as well as the specifics of the incident."

Speaking directly to the parents of Trayvon, Obama said, "If I had a son, he would look like Trayvon," according to The Los Angeles Times.

The shooting, which happened on Feb. 26, attracted national attention after it emerged that Martin was unarmed and was followed by George Zimmerman, a Hispanic neighborhood watch volunteer, even after the police discouraged the volunteer from doing so. Zimmerman claimed self-defense in the shooting and was not charged by the Sanford police department.

Obama did not comment on the more controversial aspects of the case, including Florida's Stand your Ground laws, the Sanford police's handling of the case and whether Martin's race played a role in the shooting, said The New York Times.

The Justice Department announced earlier this week that it will be launching an investigation into the case, and the FBI is also reviewing the case. The LA Times said a Seminole County grand jury will be convening on April 10 to hear evidence on the case.

Sanford Police Chief Bill Lee also temporarily stepped down from his post on Thursday, in response to criticism of his handling of the case. He said his involvement in the case was becoming a distraction and "overshadowing the process," according to CNN.

CNN reported that demonstrators were preparing to march in Tallahassee, Florida, on Friday, to protest Trayvon's death.

View all of our Trayvon Martin coverage.