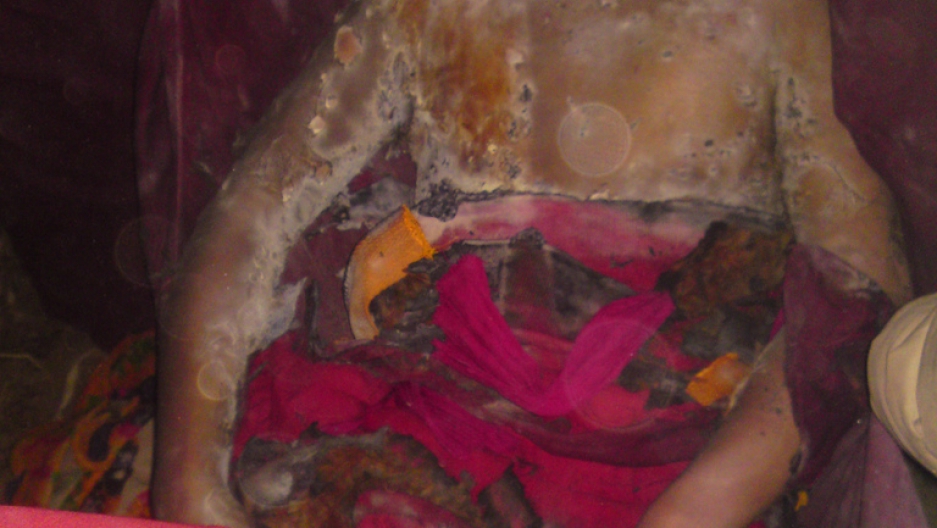 The body of Phontsok, a 21-year-old Tibetan monk from Ngaba Kirti Monastery after he self-immolated in protest of the Chinese government's crackdown in Tibet, shown on March 16, 2011.
Credit: Nick Gulotta
Share

Nearly 30 Tibetans have lit themselves on fire in the past year, typically dousing themselves with gasoline or kerosine and drinking it also for maximum effect.

But what used to be a practice reserved for protesting monks and nuns has spread to laymen after a farmer self-immolated and died Sunday.

Sonam Thargyal, the farmer, was apparently a friend of a monk who attempted suicide-by-burning earlier this month but survived. Thargyal called for an end to Chinese control of Tibet and Tibetan populated areas, Tibetan language rights and that the exiled Dalai Lama be allowed to return. According Associated Press reports, close to 7,000 people attended the farmer's funeral last weekend, and the non-profit Free Tibet said a scuffle between mourner-protesters and Chinese police ended peacefully.

Self-immolation is not supported or encouraged by Tibetan spiritual leader the Dalai Lama, who does not encourage any kind of violent protest — including hunger strikes — though he has lauded the courage of those who commit suicide by burning themselves as a form of protest. The exiled Dalai Lama has called Chinese rule in Tibet "cultural genocide," and many Tibetans "have pleaded for an end to the self-immolations, saying they are not helping the cause of Tibetan rights," according to Al Jazeera.

More from GlobalPost: Tibetans in Turmoil

Those who self-immolate are mostly under 30 (although the farmer was 44) according to author Matteo Pistono, and actually, the practice is relatively new —there are no known records of self-immolations occurring in Tibet before 2009. Free Tibet's list of actions and escalating protests are good example of what this young generation of Tibetans will do for freedom, with such links for this month listed as "14 March: Students protest in Tsekoho County/12 March: Tibetan anniversary marked with teen self-immolation/8 March: Students protest," etc.

Chinese leaders are changing their tune in response, and in a surprising comment on the recent self-immolations, Premier Wen Jiabao said in a press conference, "The young Tibetans are innocent and we feel deeply distressed by their behaviors." Wen added that he would be interested in visiting Tibet after his retirement.

"But it depends on the circumstances at that time," he clarified. The official view is that Tibet and Tibetan-inhabited areas are "inseparable parts" of China.

Rarely do the Chinese refer to Tibetan protesters as "innocent," and the Premier's rhetoric, always carefully chosen, reflects a shift in attitude, perhaps because of the rising number of suicides by young people.

But the question remains: Why are so many Tibetans protesting in this violent way, and will the numbers continue to rise?

In an interview with Religion News Service, Prime Minister-in-exile Lobsang Sangay said young monks self-immolate because, "Repressive policies of China have pushed them to the brink of desperation. Members of the Communist Party of China dictate what monks and nuns should do, how they should pray, and who should be allowed into the monasteries."

A GlobalPost story from Nov. 2011 related brutal stories of electric shock, beatings, and other forms of torture inflicted by Chinese police for crimes such as yelling about a free Tibet or displaying the Dalai Lama's likeness.

“The [electrical] shocks felt like a fire in my chest. They told me to admit the Dalai had ordered me to demonstrate in the streets — and then shocked me, over and over,” one farmer said. "I was told to admit my crimes of trying to split Tibet from China, and that I was supported by the Dalai Lama."

This week, 40 more monks were arrested and hauled away by police for protesting, after the rest of the congregation was locked in a monastery and surrounded.

More than 60 years of negotiations with China's government have returned nothing but exile for a refugee Tibetan government, a harsher crackdown by police in Tibet, and a rising generation losing patience. Free Tibet's director said in a statement that self-immolation "underlines that Tibetans will not stop protesting until their calls for freedom are heeded. The international community must take immediate action.”