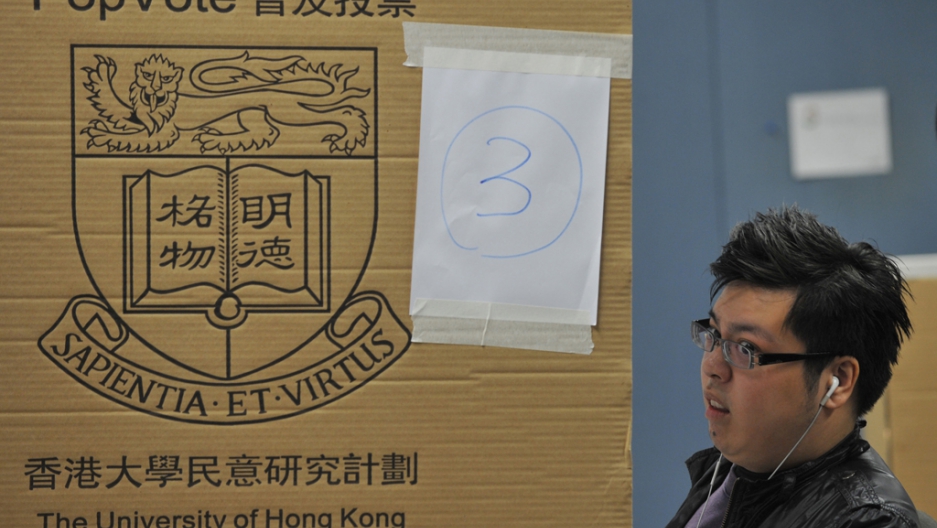 A man reacts at a polling booth at a mock election for Hong Kong's chief executive at the Hong Kong Polytechnic University on March 23, 2012. Thousands of people who do not have the right to vote in the tightly controlled "small-circle election" are expressed their views through an unofficial poll organized by the University of Hong Kong, however, the online referendum was hacked.
Credit: AARON TAM
Share

Hackers disabled an online "civil referendum" which tried to gauge how Hong Kong's residents would have voted had they been able to participate in the upcoming elections, according to Reuters.

The election to choose Hong Kong's next chief executive is going to take place on Sunday, but only 1,200 people, members of Hong Kong's election commission, will vote. The election campaign has been riddled by scandals and protests, even though both candidates, Henry Tang and Leung Chun-ying, have close ties to Beijing.

The rest of Hong Kong's population, around seven million people, will have no say in their leader. The University of Hong Kong launched the "civil referendum" to gauge how people would have voted, if they had the chance. The referendum was opened on Thursday, and people could vote via their cell phones or on the referendum's website, but it crashed after what the director, Robert Chung, called "high-level cyber attacks," according to Reuters.

Chung said, "The system has been very busy. We suspect it is under systematic attack as there are more than one million clicks on our system every second," according to The Australian. According to the newspaper, Chung did not indicate who could be responsible for the hacking, but his team, from the Public Opinion Program, has a history of clashing with Beijing's authorities by revealing that public opinion is against the mainland's official stance.

After a poll in December 2011 by Chung's group found that only 17 percent of people in Hong Kong identified themselves as Chinese, the lowest number in 12 years, the mainland accused Chung of having "evil" political motives and fomenting unpatriotic sentiment, according to Reuters.

The New York Times noted that the scandals that have rocked the Hong Kong election campaign have only increased the calls for real elections. "The radio waves and the Internet have been bursting with frustrated citizens demanding this. They don’t want to see Beijing working behind the scenes; they want credible candidates and they want to elect them directly."

According to The Times, Beijing indicated in 2007 that there would be a possibility for Hong Kongers to directly elect their chief executive in 2017, though only after a nomination process had filtered out "undesirable" candidates.