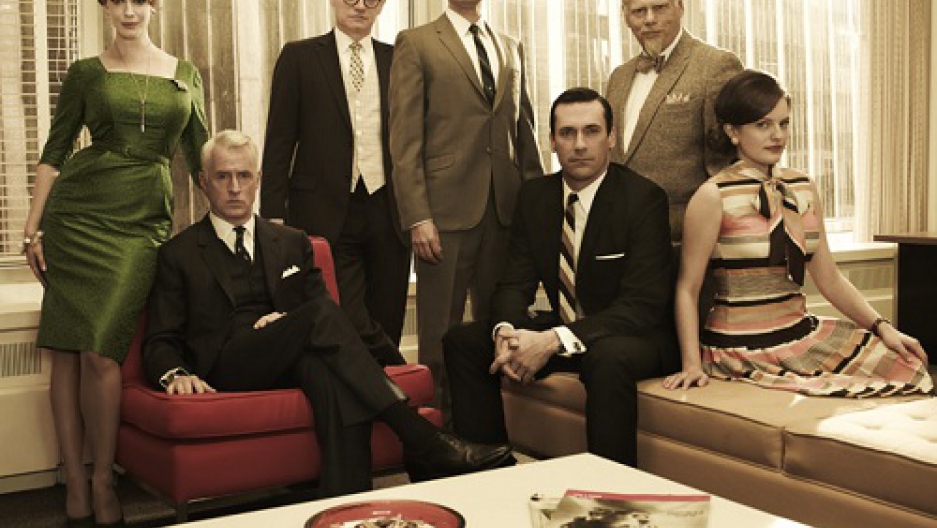 The cast of the fifth season of Mad Men, premiering on Sunday, includes most of the veterans fans have grown accustomed to. (Photo by Frank Ockenfels 3/AMC via Wikimedia Commons.)

By the time “Mad Men” wrapped up its last seasons on AMC, you’d be excused for saying “good riddance.”

It’s a pleasure to say that Mad Men has righted its ship as it sails back into port for its season premiere (Sunday night — AMC).

“Mad Men,” the show set in a 1960s advertising agency, has been gone for 17 months because of a dispute between series creator Matthew Weiner and the producers.

When Draper proposed to his secretary, Megan, at the end of the fourth season, it seemed to be a sign of both his dissolution and the show’s desperation. But Jessica Paré as Megan not only gives Draper a new lease on life, she breathes some new sensuality into the show, particularly when she does a Jane Birkin-Brigitte Bardot mini-dressed dance number for him on his 40th birthday as the astonished members of the Sterling Cooper Draper Pryce agency look on. (You might be equally astonished at their make up sex a little later in the show.)

In any event, it’s emblematic of how the show depicts the last vestiges of the 1950s turning into the early stages of what we think of as the 1960s. We see the women of the show struggling with inequality. In terms of civil rights, the program opens with a group of black Civil Rights marchers being pelted by water bombs from the windows of Young & Rubicam, a rival advertising agency. And the closeted gay character of the first season or two was heart-wrenching.

Weiner is particularly adept at using the ad agency to chart the changes of the time, as when the men from Heinz ask Draper to co-opt the demonstrations of the times by having college students hold up signs saying, “We want beans.”

It’s the women of the show, though, who are the real soul of the series. Take Christina Hendricks as Joan, the Marilyn Monroe-ish secretary who began the series as Roger Sterling’s mistress before dumping him for marriage to a doctor. That seemed fine until the horrific scene a few seasons ago when her husband raped her. But now he’s away at Fort Dix and Joan’s mother is helping her take care of her infant while telling her she should put thoughts about going back to work aside.

Unlike last season, every scene in this two-hour episode rings true. And don’t worry about Draper getting too nice; there are shades of gray throughout Sterling Cooper Draper Pryce.