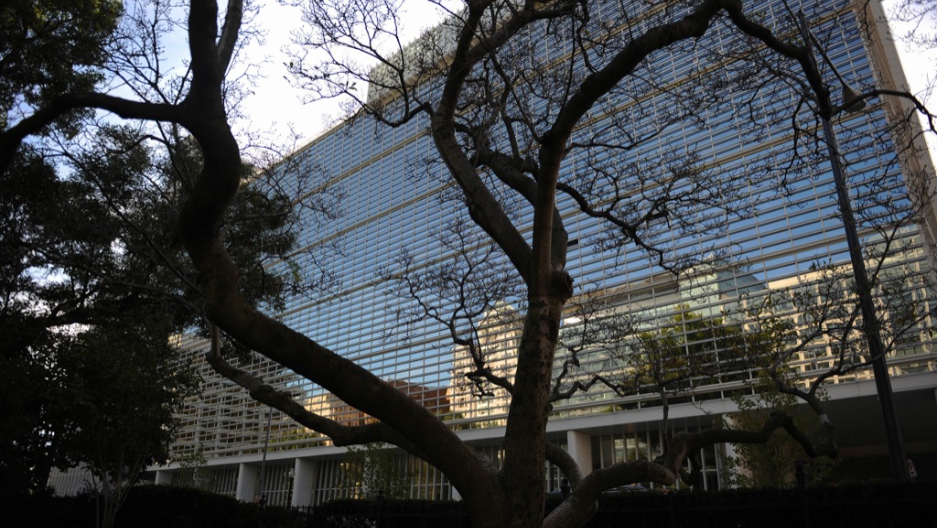 The World Bank Group building is seen at the start of the Annual Fall meetings of the International Monetary Fund (IMF) and World Bank on October 10, 2008 in Washington, DC.
Credit: Tim Sloan
Share

WALTHAM, Massachusetts — It’s time for the World Bank to stop pretending significant progress is being made in reducing extreme global poverty. The self-congratulatory report it issued recently claimed it had achieved its stated goal of cutting global poverty in half. This was extremely misleading at best.

This goal (the first of the eight Millennium Development Goals) was originally announced as being to cut in half the total number of people living in extreme poverty by 2015. When it became obvious that the economic policies of the Bretton Woods Institutions of the World Bank, the International Monetary Fund and also the World Trade Organization would never allow for that to happen — because they were not intended to reduce global poverty, as will be explained — the UN General Assembly redefined the goal as being to cut in half the proportion of the global population of those living in extreme poverty. This redefinition enabled the World Bank to put forth the illusion of progress when none was actually occurring.

Thomas Pogge, Director of the Global Justice Program and a professor of philosophy at Yale University, is deeply skeptical both of the World Bank’s findings and its methodologies. In his 2010 book, Politics as Usual, Pogge argues that, besides the troubling redefinition of MDG1, the World Bank’s methods of calculating consumer price indices (CPI) and purchasing power parity (PPP) fail to count many people who actually are experiencing extreme poverty, which is defined as living on less than $1.25 a day.

“It’s a massive crime against humanity,” he said in an interview. “How can this be? How can people be less and less poor, and more and more people are hungry?”

The number of chronically undernourished as tracked by the United Nations increased from about 800 million in 1992 to 925 million in 2010, according to this UN report, and increasing food prices are likely to have pushed it much higher since.

Between 1990 and 2008, the number of people living in extreme poverty shrank only incrementally, from 1.2 billion to 1.1 billion, when you exclude China. And you should exclude China, because its radical poverty reduction has been achieved via methods that are completely at odds with World Bank and World Trade Organization policies.

While China has been a member of the WTO for the past decade, it “does not fully embrace many fundamental free market principles of the global trade body,” as the US Trade Representative’s office told Congress in an annual report last year. The report complained about China’s interventionist policies, its failure to reduce market access barriers and the decision of Chinese leaders to begin backing away from the types of market reforms that led to China’s admission to the WTO in 2001.

The biggest positive lesson the developing world could learn from China centers on its use of surplus product, that part of an industry’s profit that is not consumed by production or reproduction. China, with its command economy, reinvests its surplus product into more and more factories, roads and other utilities, and as a result is seeing much more dramatic progress in job creation and poverty reduction. For a contrast, US corporations typically pour much of their surplus product into the salaries of their top executives.

Somehow it doesn’t seem surprising that China continues to scoff at the WTO’s 'principles', when the policies the country embraces have reduced the number of its citizens who are experiencing extreme poverty — according to the World Bank’s own report — from 683 million in 1990 to 173 million in 2008. That is a 75 percent reduction, and China achieved this precisely because it ignored the WTO and World Bank.

During the same time period, the number of people living in extreme poverty in Sub-Saharan Africa increased from 290 million to 386 million — a 33 percent increase. This, despite hundreds of billions of dollars being poured into countless feel-good Western-launched poverty alleviation projects, the vast majority of which reference the First Millennium Development Goal as the reason for their existence.

While, doubtless, many development practitioners are well-intentioned souls who hope to make the world a better place, their projects will never have anything more than a local influence, because the machine that keeps developing nations poor is too large and too well-entrenched. The irony is that this machine is comprised of the very institutions that claim to be attempting to alleviate poverty.

The World Bank and WTO tell developing countries that the way to prosperity is to open up to international markets, when virtually no developed country achieved its prosperity in this way.

Ha-Joon Chang, a South Korean economist, points out this fallacy in his 2005 book "Kicking Away the Ladder." Chang points out that “virtually all now-developed countries [have] actively used interventionist industrial, trade and technology policies that are aimed at promoting infant industries” for most of the past 200 years.

The US and UK, self-proclaimed historic bastions of free market capitalism, arrived at their current levels of economic development with systems of extremely protective tariffs. Now that they have reached a certain level, it is much closer to their interests to encourage natural resource-rich developing nations to open their markets — and their borders — to foreign investment. The only beneficiaries of this system are wealthy elites and transnational corporations.

Global poverty is not natural; it is created and cultivated. The fact is that the purpose of the World Bank, IMF and WTO was never to alleviate poverty but to maintain the global status quo. It is high time to stop pretending otherwise.

Joel Elliott reports on human rights and development issues, usually from Asian countries, for a number of publications including GlobalPost. He is a 2012 candidate for dual master’s degrees in Sustainable International Development and Coexistence and Conflict at Brandeis University's Heller School.