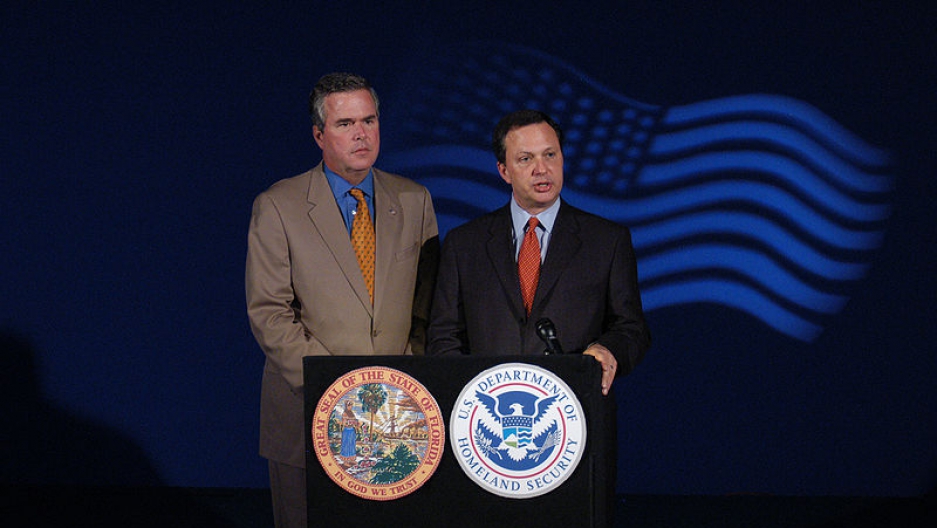 Then-Gov. Jeb Bush stands with Mike Brown from the U.S. Department of Homeland Security in 2004. Bush endorsed Mitt Romney for president this week — but it didn't have a dramatic effect on the race. (Photo courtesy of FEMA.)

But whereas that might have been the gold-standard endorsement even a few years back, the seal of establishment approval isn't so sought after these days. Don't be mistaken — Romney was still happy to get the endorsement and used it as a tool to try and push challenger Rick Santorum from the race.

But in today's Republican Party, anti-establishment fervor runs high and party loyalty has gone by the wayside. Along the way, the party's established members, the Republican Establishment, have seen their importance decline.

Anna Sale, a reporter for political site It's a Free Country, said you can see this dynamic play out Bush's name, Sale said, is a big name and one that's been bandied about as someone who could make a late entry into the field and unite the party base. But his appeal to have the party rally behind Romney has largely gone unheeded.

"There's something happening in the Republican Party that's been a long-time coming — and that's the declining of the influence of the party elders. Their declining ability to speak to the base and say 'oh, come on, follow our lead, this is the guy,' " Sale said.

Sale said that the fault for some of this declining influence may actually go back to the Republican Party itself — which has been pounding the drum of how voters shouldn't, indeed can't, trust Washington elites.

Historian Geoffrey Kabaservice, who's written a book about moderate Republicans, said this amounts to a unique moment in Republican history.

"We're seeing the final consequences in some ways of this drive to make the Republican Party into an ideological vehicle," Kabaservice said. "By empowering this populist, conservative base, you really get this very anti-establishment dynamic within the Republican Party itself. And Republicans are actually supposed to support authority."

Sale said the decline in influence can also be seen in terms of the clout of the two living former Republican presidents, George H.W. Bush and George W. Bush. Neither one of them has been able to do much to push the Republican base in a particular direction.

"George H.W. Bush never excited social conservatives and George W. Bush has since been rejected because of the increase in debt during his presidency," Sale said.