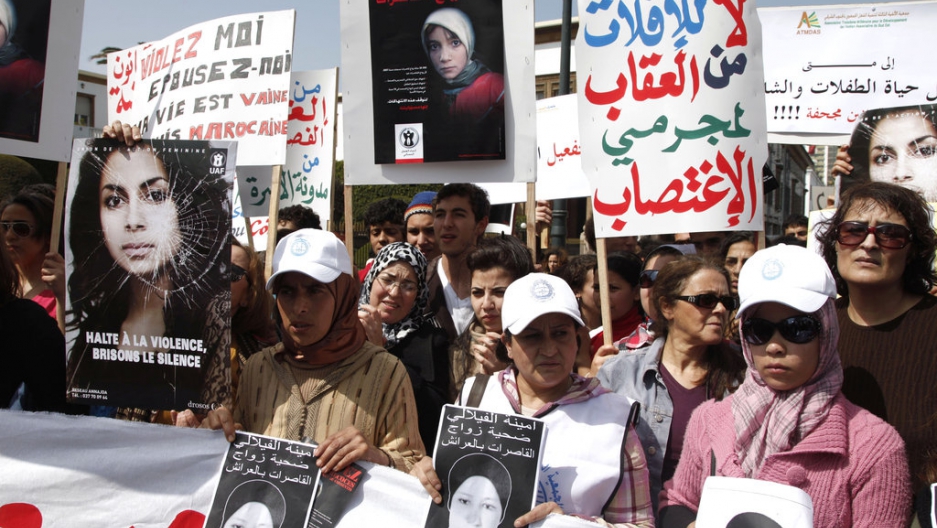 Women protest outside parlament against the suicide of Amina al-Filali, 16 who was forced to marry the man who raped her. They called for changes to a penal code that allows a rapist to stay out of jail if he marries his victim with the consent of her parents.
Credit: -
Share

Amina Al Filali was raped and then court-ordered to marry the man responsible for the crime. Five months later, she committed suicide by ingesting rat poison to avoid a life with her rapist who also repeatedly beat her. The 16-year-old's death has inspired a petition that has reached nearly 500,000 signatures to change Morocco's constitution and protests have erupted in the capital in support.

Since 2004, the government has promised to change the law and focus on violence against women, and an update to the country's Family Code included raising the marriage age from 15 to 18 and making it illegal for minors to be forced into marriage. However, old loopholes exist, and Article 475 is one of them.

"We thought the new Family Code would unite us, that it would give us back our rights and protect us, but no one is there to encourage it or implement it," says a young woman in a student-produced video on the rights of women in Morocco.

According to AJStream, "Article 475 of the Moroccan penal code in French says that the 'kidnapper'—a term that can refer to an attacker or rapist—of a minor cannot be prosecuted if he marries his victim. The Arabic version refers to the one who “kidnaps or deceives’’ a minor. In both the French and Arabic wording, the Article justifies the minor’s marriage and the 'kidnapper's acquittal."

On Saturday, hundreds of women and women's rights activists marched in Rabat in support of changing the penal code and staged a sit-in at the parliament. President of the Democratic League for Women's Rights (LDDF) Fouzia Assouli told the BBC, "In Morocco, the law protects public morality but not the individual."

Twitter and Facebook have also played a large role in the movement to support Amina and condemn the system that made her situation totally legal. A Facebook group has been set up, and the hashtag #RIPAmina is flowing at about 20 tweets a minute, with tweets in French, Arabic and English merging together.

Like many conservative Islamist countries in North Africa, Moroccan society dictates that a rape victim's shame falls on her and her family. Dishonor is a serious offense for an unmarried virgin, and marrying a rapist eases the cultural problems brought on the family. But this is also something young women are aiming to change in their country.

Moroccan communications minister Mustapha el-Khalfi told Al Jazeera, "We can't ignore what happened, one of the things we are looking for is to toughen the sentence for rape. We are also looking to creating a debate on the cultural and social aspects to create a comprehensive reform."