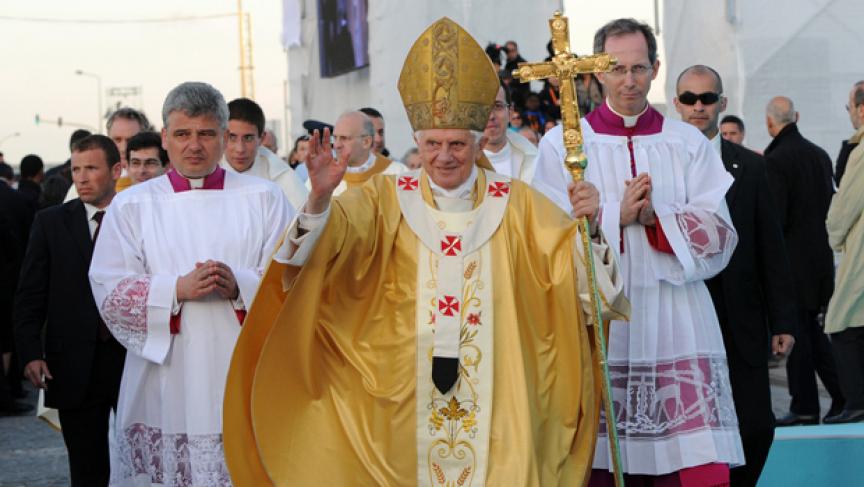 Pope Benedict's butler is ordered to stand trial along with his accomplice for the leaked letters. (Photo: Catholic Church/Flickr)

Share
Pope Benedict the 16th leaves for Mexico on Friday. This weekend, he'll greet followers and celebrate mass in the conservative state of Guanajuato, an area considered Mexico's bible belt. Where the Pope isn't going is Mexico City, a place his predecessor visited multiple times. The Vatican says it's to avoid the capital's high altitude and smog. Others say the real reasons are the laws that make abortion and gay marriage legal in Mexico City. Among the fanfare, the Pope will reiterate his devotion to Mexico, the world's second-largest Catholic country. But in Mexico there are also growing splits between Catholics and the Vatican's teachings. On a recent morning, in a budget hotel room in Mexico City, I met a woman trying to keep her faith while making choices that the Pope rejects. Her name is Laura Cruz. She's 25, and lives in Oaxaca. Cruz, a sociologist, lives in Mexico's rural south, and accidentally got pregnant with her boyfriend. Not ready to be a mom, she faced a choice: go underground in Oaxaca–where abortion is illegal and a botched job can mean a frantic trip to a hospital and risking jail time. Or, she could take a six-hour bus ride to Mexico City, where abortion became legal in 2007. She struggled with her decision: "I was thinking, what's the Church going to think? Because the church tells you all the time, it's wrong, it's wrong, it's wrong," Cruz said. But she felt better once in Mexico City, knowing there were Catholics who supported her: "In Mexico City, here you have rights, you have more rights than in other cities. I don't feel bad with my Catholic part because I know what I did is the best option for me," she said. Mexico City, with its new laws protecting abortion and gay marriage, is now a refuge for people like Cruz–and represents a lost battleground for the Vatican. And some believe that's why Pope Benedict — who has condemned Mexico City's laws — will skip the capital. The Vatican's official reason is the elevation and air quality. Elio Masferrer is a religious scholar in Mexico City. "The problem is simple. In Mexico City, it's legal to marry people of the same sex and to have an abortion," Masferrer said. "It's evident that the Pope will not come because that would validate these legal changes in the country's capital. Instead he will go to the state of Guanajuato, which has the highest percentage of Catholics and which is run by a political party that rejects abortion and other changes." It's a critical year. Mexicans elect a new president in July and the church has already issued "pastoral guidelines" recommending that Mexicans reject politicians who accept Mexico City's liberal ways. Speaking near the basilica in Mexico City, top-ranking bishop Víctor René Rodríguez defends the Church. "We're only expressing our point of view and that's how we've been working with different groups of congressmen," he said. Those are fighting words to some in Mexico City, even to some Catholics. In a colonial-style house near one of Mexico City's oldest churches, is the headquarters of Catholics for the Right to Decide. Inside, there are posters promoting condom use and awards from Amnesty International. Director Maria Consuelo said her group is determined to advocate for the controversial abortion and gay rights, and she knows priests and nuns who agree with them: "But we know it's difficult for them to speak out, because speaking out means punishment or means silence," she said. Consuelo also knows that Mexico's Catholic authorities are pushing hard throughout the country to keep Mexico City's liberal influence at bay: "The Catholic hierarchy is trying to gain again all of the privileges they lost with these reforms." The Catholic Church's retaliation is working, Consuelo says. In a serious backlash to Mexico City's abortion law, at least 18 other states in Mexico have passed stricter bans on abortion, including personhood laws mandating that life begins at conception. "That is a backlash," she said. "And the visit of the Pope at this moment adds to very, very critical situations." Catholic hardliners defend lobbying for the abortion bans. Again, Bishop Rodríguez: "We don't believe in persecuting women, but what we do argue is that they think about the life about to be born," the bishop said. So Mexico City is a bubble. And the epicenter of a religious battleground. Back in the Mexico City hotel room, Laura Cruz said that she's determined to pass out pamphlets about abortion back in Oaxaca. She resents that the church "trying to control what you're going to do with your body." And she lamented that, "I have to come here to feel like a first-class citizen. I want to feel like a first-class citizen wherever I am in Mexico." With these divisions far from resolved, the split between the Vatican's teachings and the realities and desires among Mexico's rank-and-file Catholics will continue long after the Pope's departure.