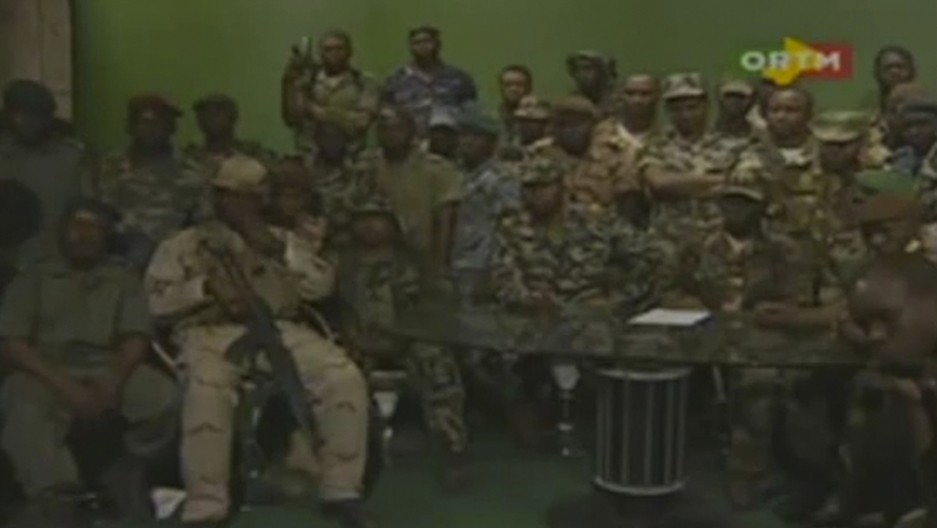 Rebel soldiers announce on Malian state TV that they have seized control of the country, suspending the constitution and dissolving institutions because of Mali's "incompetent" government.
Credit: Screengrab
Share

Renegade soldiers in Mali, frustrated over their government's handling of a Tuareg rebellion in the north, claimed to have seized control of this West African country in an announcement today on state television.

The news of a coup followed a day of heavy gunfire in Bamako, the capital, with soldiers taking control of the state broadcaster in what was initially described as a mutiny. Soldiers later stormed the presidential palace, and then looted it, with President Amadou Toumani Toure going into hiding at an unspecified location.

A group of around two dozen soldiers dressed in army fatigues appeared on television early today, announcing that Mali's constitution is being suspended and institutions dissolved, the Associated Press reported.

The soldiers said the country is now under control of the military's National Committee for the Reestablishment of Democracy and the Restoration of the State, or CNRDR.

The coup comes one month before Mali's presidential election, in which the democratically elected Toure is due to step down.

"The CNRDR representing all the elements of the armed forces, defensive forces and security forces has decided to assume its responsibilities and end the incompetent and disavowed regime of (President) Amadou Toumani Toure," they said, reading from a prepared statement, adding that "we solemnly swear to return power to a democratically elected president as soon as national unity and territorial integrity are established."

The group's spokesman was identified on-screen as Lieutenant Amadou Konare, while its leader was said to be Captain Amadou Sanogo, who appeared briefly to announce a national curfew, Agence France-Presse reported.

A BBC report said soldiers were seen carting televisions and other goods out of the palace.

The whereabouts of President Toure, who earlier was holed up at the palace, is unclear. The BBC reported that Toure is safe and not in the custody of mutineers, while other reports placed him at an unspecified army camp.

Ecowas, the West African economic bloc, condemned the "misguided" actions of Malian soldiers and in a statement said "it will not condone any recourse to violence as a means of seeking redress."

Government troops on Wednesday had protested the lack of arms in their campaign against Tuareg rebels fighting for an independent homeland in the country's north.

The rebellion in northern Mali led by the nomadic Tuareg desert tribe is thought to have claimed dozens of lives, although Mali's government has not released an official death toll. Clashes between the rebels and government forces have displaced nearly 200,000 people.v