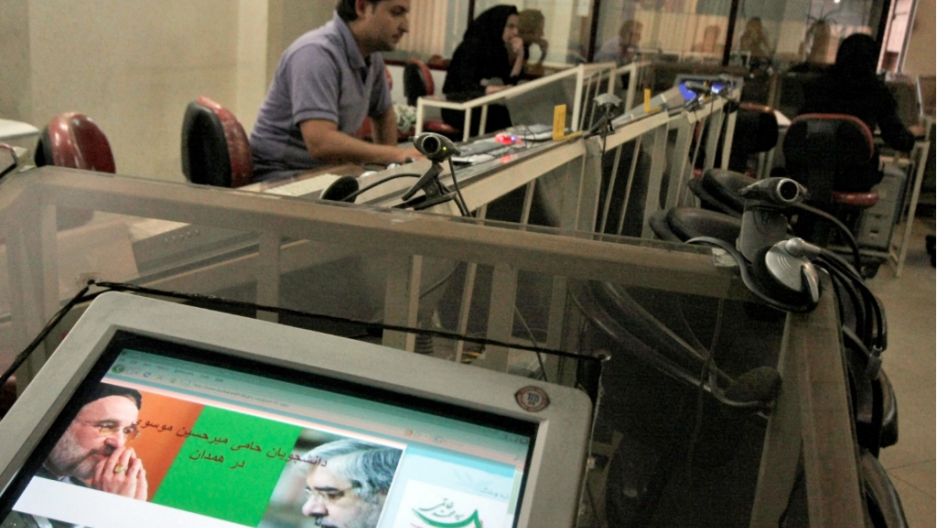 A website for "Green Movement" opposition leader and presidential candidate Mir Hossein Mousavi (R) and former reformist president Mohammad Khatami (L), is open in an internet cafe in the southern Iranian city of Hamadan in the lead-up to the country's 2009 presidential election.
Credit: Nima Daymari
Share

China's ZTE Corp sold the program to the Telecommunication Co of Iran (TCI) in December 2010 for roughly $130 million, according to Reuters, a deal that shows Iranian authorities have found a trading loophole for obtaining banned US technology.

This is hardly the first time a major tech company has colluded with the Iranian authorities. In 2009, the Nokia Siemens Network came under fire for selling Iran a monitoring system that could record and intercept cell phone conversations -- news that led to a major consumer boycott. The company announced in January that it would no longer pursue business with the Islamic Republic and would gradually reduce its business presence there.

The unrest, much of which was caught on cell phone camers by tech-savvy Iranians and uploaded online, prompted a swift, brutal government crackdown that has lead the imprisonment, torture and death of many involved in the so-called Green Movement.

And with Arab Spring demonstrations taking place in Iran's own backyward, the country's worried Islamic authorities continue to pursue monitoring efforts -- one recent example being the recent launch of a state-run Supreme Council of Cyberspace.

The move also reveals growing anxiety over online activity in a hugely young country -- nearly two-thirds of Iran's population are under 30 years old, many of them skilled at cirumventing the government's intermittent attempts to block popular sites like Facebook and Gmail.

Iranian authorities are also eager to keep tabs on a restive citizenry as the country's economy continues to tank due to fresh sanctions over its controversial nuclear program.

The US and other Western accuse Iran of using the program to make a bomb. Iran denies such claims, but the issue has contributed to a raft of economic barriers to Western trade with the Islamic Republic.

Which makes the China -- Iran's largest trading partner -- all the more critical to the Islamic Republic's special needs.

The two repressive regimes are naturally suited for one another, with the success of China's domestic Baidu search engine possibly helping inspire Iranian plans for a similar home-grown search engine to be called "Yahaq" ("Oh Lord").