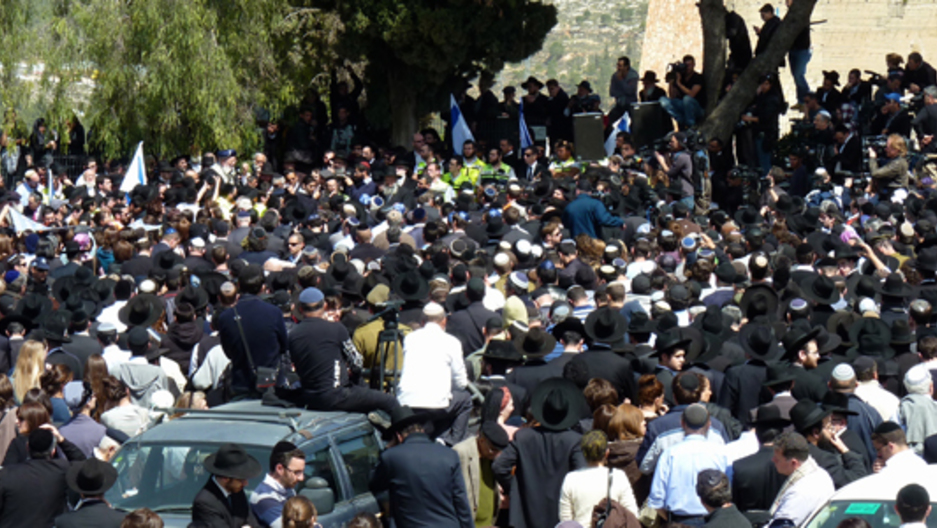 The funeral for the victims of Monday's murders in France took place in Jerusalem today. Both of Israel's chief rabbis spoke, along with the French foreign minister and Israeli officials. (Photo: Matthew Bell)

Share
As French police surrounded the suspected killer of three Jewish children and a 30-year-old rabbi in Toulouse*, the victims were laid to rest in the Jewish cemetery in Jerusalem. Around 2,000 people turned up for the funeral. The weather was perfectly sunny and warm for a ceremony that lasted about two hours. But the mood was deeply somber. The bodies of Jonathan Sandler, his two sons, 4-year-old Gabriel and 5-year-old Arieh, along with a 7-year-old girl named Miriam Monsenego, were flown to Israel on Tuesday night. They were wrapped in prayer shawls and dark fabric, and then carried on the shoulders of mourners to their final resting place. Among those who addressed the crowd were relatives of the victims, both of Israel's chief rabbis, along with several Israeli officials. Some of the speakers broke down with emotion at the podium. Despite the overwhelming sense of tragedy, Israel's Minister for Public Diplomacy Yuli Edelstein had high praise for French authorities. When asked about reports of the suspected killer sharing the ideology of al-Qaeda, Edelstein said he was not surprised. "Their raison d'Ãªtre is to kill Jews, to kill everyone who is not part of their perverted and terrible ideology," Edelstein told a few reporters before the funeral got started. "It's our mutual task to make sure that they don't succeed. And the French government and the French security forces gave a very good example on that." Edelstein said he hoped any future attacks would be thwarted before they are carried out. Many of those in attendance came from Israel's tight-knit French-speaking community. "It's very hard for everyone here because we all feel related to what happened in France," said a 24-year-old student from Paris who gave his name as Gary. Four years ago, he came to Israel and decided to stay. Now, he lives in a Jewish settlement in the West Bank. "When some kind of tragedy like this is happening, you just can't think about anything but 'join me.' I think [Israel is] the place Jewish people should be." Others said they agree. The murders in Toulouse this week strengthen their belief that the only way for French Jews to be truly safe is to leave. Rabbi Mordachai Ben-Shushan is originally from Nice, in the south of France. But he has been living in Jerusalem for five years now. Ben-Shushan said his message to the Jewish community back in France is simple. "All the Jews have to come here to Israel," he said. "[Israel] is fundamentally the state of the Jewish people and they have to understand to prepare themselves to come to Israel." The French Foreign Minister Alain Juppe traveled to Jerusalem with the bodies of the victims and he spoke at the funeral on Wednesday. Juppe appeared to disagree that Jews are not safe in France. "Each time a Jew is attacked [in France]," he said, "the whole nation is targeted. France will not give in to terror." Juppe added that, "anti-Semitism goes against the values of France." The suspected killer reportedly told French negotiators on Wednesday that he was attempting to avenge the deaths of Palestinian children with his actions. In response, Palestinian Prime Minister Salaam Fayyad condemned the murders as "a cowardly terrorist attack." *Update: A previous version of this story incorrectly stated there were four Jewish children killed. There were three children killed and a Rabbi. We regret the error.