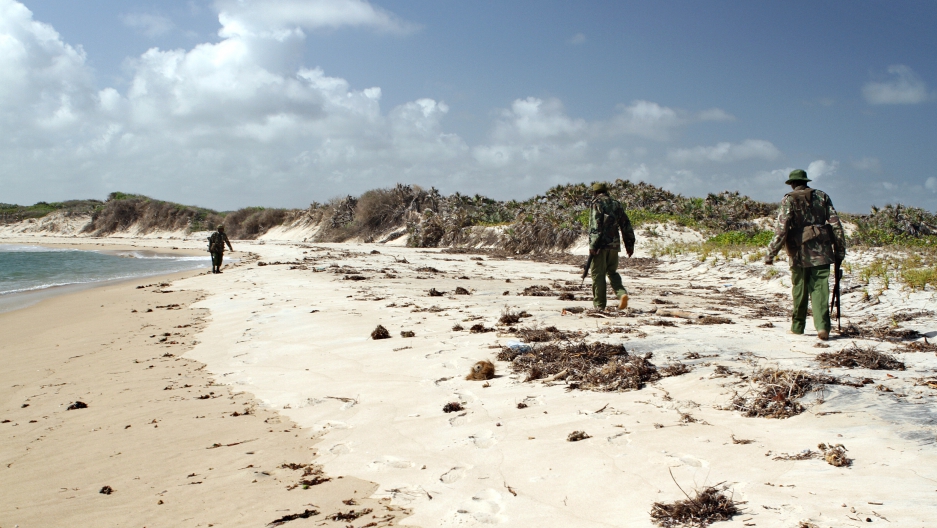 Armed policemen patrol a stretch of beach near Kiwayu Safari village in Kenya on Sept. 12, 2011. Holidaying British couple David and Judith Tebbutt were attacked there on Sept. 11 by suspected Somalia based Al-Shabab militia, ending in the fatal shooting of David and the kidnapping of Judith.
Credit: WILLIAM DAVIES
Share

NAIROBI, Kenya — British woman Judith Tebbutt, 56, has been released by Somali pirates after being held hostage for more than 6 months.

Sources in Somalia say that a ransom was paid, possibly as much as $1 million, scraped together by family and friends. A similar amount secured the release for the British couple Paul and Rachel Chandler in November 2010 after more than a year's captivity. Like the Chandlers, Tebbutt was being held close to the town of Adado in central Somalia, in a similar location to where American aid worker Jessica Buchanan and her Danish colleague, Poul Hagen Thisted, were rescued by Navy SEALs in January.

Tebbutt was kidnapped from a luxury resort on the Kenyan coast on September 11, 2011. Her husband was killed in the attack and she was whisked away by boat.

A handful of private individuals remain in the hands of Somali pirates who increasingly operate as straight-up kidnapping gangs. These hostages include two female Spanish aid workers kidnapped from Dadaab, a complex of refugee camps in northeastern Kenya, in October.

That Tebbutt's family was able to raise the money for a ransom payment makes her lucky, and very unusual. Rick Blears of the pressure group Save Our Seafarers joined others in welcoming the news of Tebbutt's release but added, "Her release has highlighted the fact that the media spotlight is firmly on kidnapped civilians rather than any of the 233 working seafarers who are currently in captivity and have been so many months.

"Many of them are kept in appalling conditions while slow ransom negotiations with shipping insurers take place. Many of their families are just far too poor to pay any kind of ransom," said Blears.

GlobalPost reported on this issue as part of the recent series Pirate Wars. The other concern that Tebbutt's release highlights is that the paying of ransoms may only encourage more abductions of foreigners whether in Somalia or elsewhere.