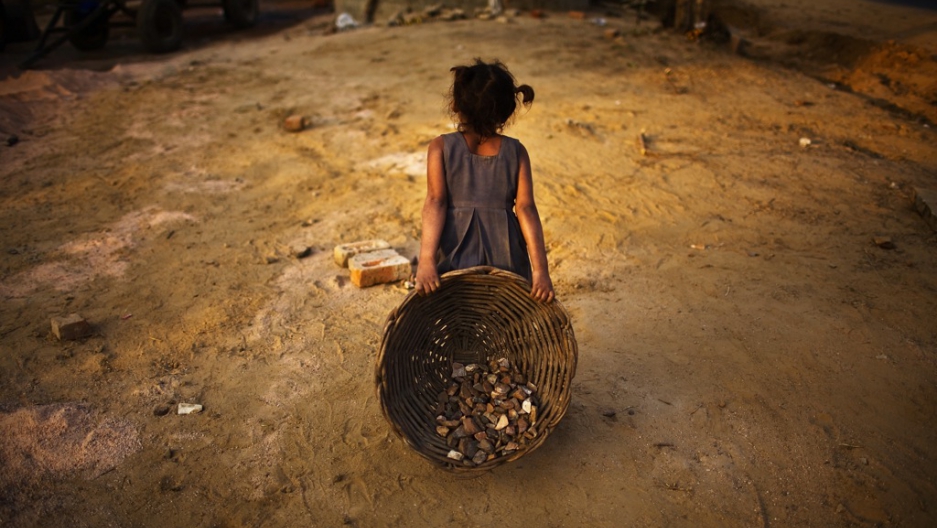 Indian children work nearby to their parents at a construction project in front of the Jawaharlal Nehru Stadium on January 30, 2010 in New Delhi, India. Many workers were paid below the minimum wage in order to complete these projects whilst also being forced to live and work under sub standard conditions.
Credit: Daniel Berehulak
Share

Sometimes it's good to be wrong. Or sortof wrong. Like when it gets people talking about some confusing and perhaps intentionally misleading statistics. So I'm not too bummed about getting called out by both the Wall Street Journal and the New York Times today.

Okay, I'm not that famous: It was just their blogs, neither mentioned me by name, and both erroneously identified this publication as The Global Post. (It's GlobalPost, people! You are ruining our street cred!)

Here's the deal: On Tuesday I suggested that the Planning Commission had artificially manufactured a 7 percentage point drop in the number of Indians living beneath the poverty line by moving the line. My mistake was that I referred to a line that the commission had suggested in September, suggesting that they'd actually lowered the threshold level that they'd been using before. (Nobody had mentioned the previous line).

Believe it or not, none of the news articles I read on this subject made any sense of the confusion by explaining exactly what the threshold had been five years ago -- including various items on the commission's chairman's clarifications yesterday. Until New York Times blogger Nikhila Gill got hold of Planning Commission member Mihir Shah to clear things up.

It turns out that the threshold for the poverty line has been consistently moving up to reflect inflation and the related increase in the cost of living. So in fact, since 2004-2005, the year from which the planners were touting a 7 percentage point drop in poverty, the poverty line has actually gone from 578.80 rupees to 859.60 rupees per month, according to the Times. Meanwhile, in rural areas it went from 446.70 rupees to 672.80 rupees.

The Planning Commission also has an explanation for why the new line differs from the one it proposed last year. This is where I got the impression that the poverty line was lowered, and, to be frank, the introduction of this new line soon after a budget that failed to deliver any substantial cuts and before the introduction of a costly food subsidy bill aimed at below poverty line families still strikes me as suspicious. But here you go:

According to Gill's interview with Mihir Shah, the numbers proposed in September were "back of the envelope" calculations based on data from a consumption survey from 2004-2005. The new numbers are based on the recently released results of the new version of the survey, for 2009-2010.

But being wrong wasn't so bad. My mistake -- along with those of the Financial Times and others -- got people talking. WSJ blogger Tripti Lahiri pointed out wisely that the Planning Commission has changed its methodology for measuring poverty several times, and that arguments that it may not have adequately accounted for inflation have some merit, for example.

And even Planning Commission Chairman Montek Singh Ahluwalia was forced to admit that the statistics they use to calculate poverty are seriously flawed, according to the Hindustan Times.