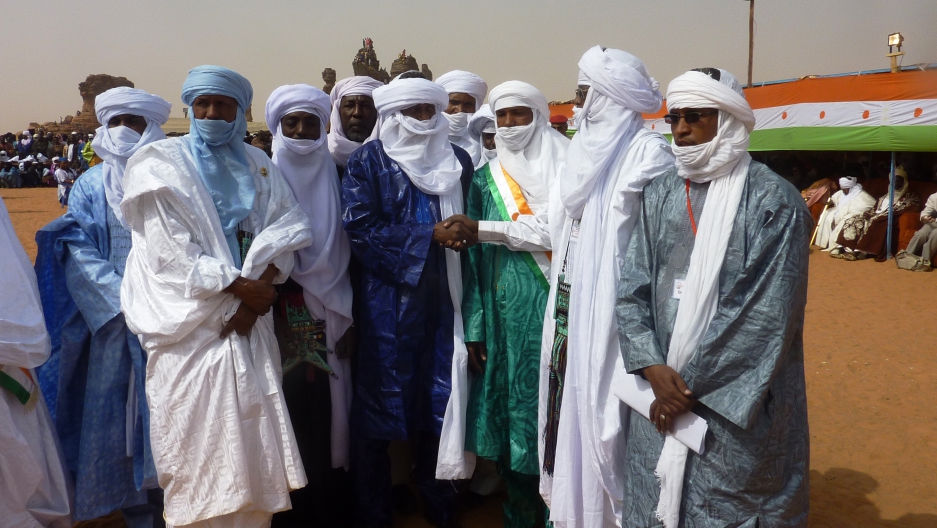 Ex-leaders of the 2007 Tuareg rebellion pose for a photograph at the "Forum for Peace and Development" on January 22, 2012, in Arlit, Niger. Addressing the Forum, Niger's President Mahamadou Issoufou warned of a new Tuareg rebellion in Niger after clashes between soldiers and rebels began in neighboring Mali.
Credit: BOUREIMA HAMA
Share

West Africa’s regional decision-making body has called for a ceasefire in northern Mali, warning Tuareg rebels that it is prepared to “take all necessary measures” to support Mali’s government, AFP reports.

The Economic Community of West African States also says it will send mediators to Mali to “encourage dialogue” between the rebels and the government and called for international humanitarian aid, according to Voice of America. The U.N. estimates that nearly 200,000 people have fled their homes since the clashes began two months ago.

ECOWAS says the Tuareg rebellion in Mali has lead to a human rights disaster that threatens regional security, according to AFP. In a statement, the 15-state bloc condemned “atrocities perpetrated in the north by the rebels, and calls on the MNLA [National Movement for the Liberation of Azawad] to immediately and unconditionally observe a ceasefire, lay down their weapons and relinquish all occupied territory in the north to central authority.”

ECOWAS also called on member states to provide “logistics and material” to the government of Mali as it “battles to defend its territorial integrity and restore law and order,” Reuters reports.

Tuaregs are traditionally nomadic pastoralists that live in the Sahara and the Sahel, occupying parts of Libya, Niger, Algeria, Burkina Faso and northern Mali, Jeremy Keenan, a professor of social anthropology at the School of Oriental and African Studies in London writes in a report on Al Jazeera.

About 1 million of the 2 million to 3 million Tuaregs live in northern Mali, which is also known as part of Azawad. The MNLA says it wants "to free the people of Azawad from the illegal occupation of its territory by Mali," Keenan writes.

Ansar Eddine, a separate rebel faction fighting with the MNLA says it does not want an independent state, but an Islamic state, Reuters reports.

"We do not want a separate republic but an Islamic republic, the Muslim republic of Mali," it said in a statement, according to Reuters.

The current round of fighting broke out in January after thousands of Tuareg soldiers returned from Libya, where they armed and trained while fighting alongside Gaddafi loyalists. Tuaregs have also staged uprisings in 1962, 1990 and 2007, all of which lasted years.

In his report, Keenan says that Mali's army “has lost control of most of Azawad” and roughly 1,000 soldiers have been killed, captured or deserted. He says the rebels are only likely to negotiate if they already have control of the region. Early this month, rebels took the strategic town of Tessalit, including a military base and an airport.

“The MNLA knows from past experience that demands for independence will get watered down,” Keenan writes. “It is therefore likely to establish the facts on the ground … before contemplating any such negotiations.