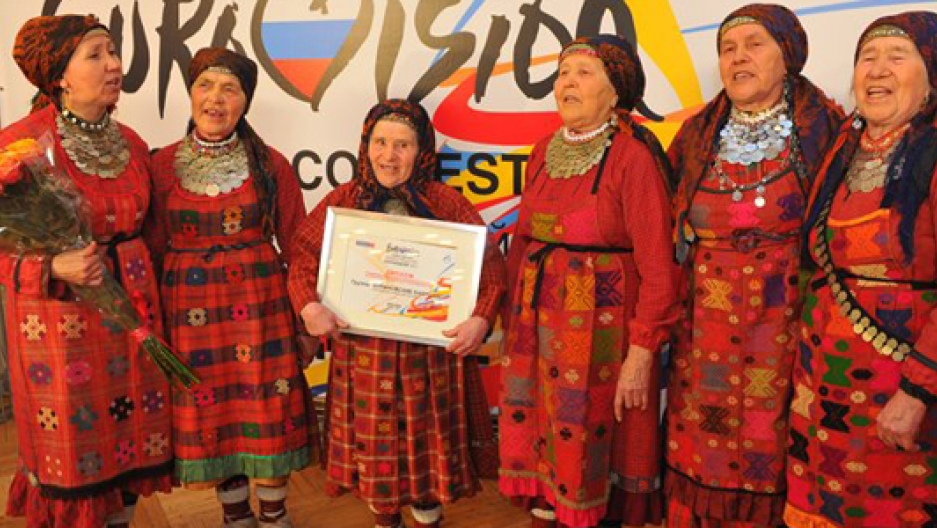 Share
A tuba band, a cake and hugs all around as the remote village of Buranovo gives a hero's welcome to its newly minted celebrities. Until a few days ago, few people had heard of the little place in Russia's Udmurtia region, but an amateur group of singing village grannies put it on the map. The Buranovskie Babushki, the Buranovo Grannies, took the Russian capital by storm, winning the country's place at Eurovision, the world's biggest song contest. The eight ladies beat 24 other contestants, and previous Eurovision winner; the pop star Dima Bilan. The babushkas' average age is 75 and they won over the judges with, "Party for everybody" — a catchy tune in Udmurt and English. The Udmurt language is a distant relation to Finnish. It's spoken by about half a million people. At Russia's Eurovision tryouts spectators clapped and danced along, as the babushkas did their shuffle on stage. Their traditional red, green and white costumes and birch bark shoes were also a hit with the fans. This woman, Victoria, says the grannies deserve to win because they represent the real Russia. At home in Buranovo, grandma Granya Baisarova showed some of her prized outfits for the TV cameras. She said the dresses are quite old, perhaps 50-years old, but they are as good as new even after I started performing. The grannies spend the day doing chores like checking on the goats. Then they head off in the evening to the local community center for rehearsals: their aim, to perfect their catchy tune. Zoya Dorodova says they're excited that they're going to represent Russia at Eurovision, but they're also nervous. "Of course we are scared, we are shaking," she says. "We are worried about the concert. It's scary, my heart is shivering." Their fans know the competition is tough, but 69- year-old Galina Georgiyevna believes the grannies have a shot at the big time. She says I think there is a chance, the babushkas have come up on stage despite their age and this is good. The grandmas will be competing for the gray vote against Engelbert Humperdink, who won the UK entry. The British balladeer is 75, but his age isn't slowing him down either. The ladies say if they win, they'll use their prize money to help build a church in their village of 650 people. Even if they don't win, Granny Galina Koneva says the group has already gotten something out of their act. "We want to have a longer life," she says. "They say that those who move, who sing, they live longer." Eurovision will take place in Baku, Azerbaijan in late May.