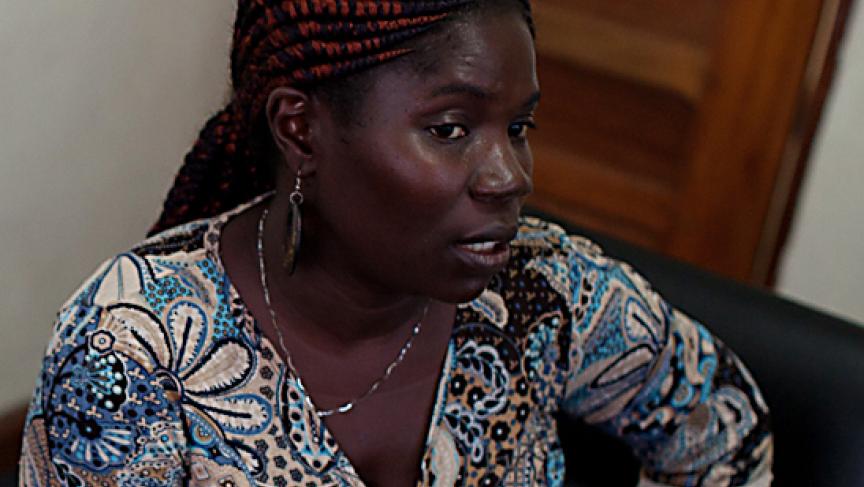 Share
I came to Liberia to work with a newspaper reporter named Mae Azango, in the capital city, Monrovia. We were going to do a story about midwives, but our plans got seriously disrupted. Just before I arrived, Azango had been working on an article about female circumcision. The World Health Organization and human rights groups have campaigned to stop the practice, which many people call "female genital mutilation." The custom exists in many African countries, including Liberia. Azango found a woman to talk to her about what she'd experienced at age thirteen. "Four women held her down, and a woman cut her," Azango explained. The woman said many girls were circumcised at the same time. "And she said when they cut them they don't use any form of anesthesia. And it hurt. She said it hurt so much." Stories about the practice are common in the Western media, but here in Liberia, writing about the topic is still sensitive. It's almost unheard of for a woman to talk in such detail about what happened to her. In Liberia, genital cutting is an initiation into a secret society, called Sande. Girls who join take an oath never to talk about the group or its rituals. Azango wanted to shed light on the practice. "Why should you carry a woman through that?" she said. "Grabbing her and torturing her and cutting her is a violation of her rights." Azango's newspaper, FrontPage Africa, put her investigation on the cover on International Women's Day, March 8. "Nobody would dare put a women's circumcision story on the front page," said the publisher, Rodney Sieh, "but we can do it." He said his paper is known for investigative stories that others won't touch. The newspaper expected a backlash, but they were unprepared for how bad it would get. On the day the story appeared, women reacted so angrily that Azango's editor called her back from the rural village where we were interviewing midwives, and we canceled our plans for other rural reporting. Women were threatening Azango. They said that if they caught her, they'd circumcise her. "And when I'm cut, I won't be able to talk," said Azango. That's because anyone who is cut takes an oath before the cutting. The oath is that if you ever speak of the ritual, you will be killed. The day after the article ran, Azango heard that a powerful woman inside the Liberian government looked for her at her office. The woman said, "We told her to stay away from this story." A few days later, the threats got even closer. Azango's editor, Wade Williams, met a tenant in Azango's house. "She said [the article] shouldn't have been published here." According to Williams, the woman complained, "You cannot degrade our tradition and publish it here. That's an insult to us." Then the woman told Williams that if Azango traveled to rural Liberia again, she'd disappear. Azango went into hiding the day the story ran, almost two weeks ago. She hasn't slept at home or been to her office since. When I decided to write a story about what happened to her, I chose not to seek out the women who were threatening her. Azango had been seen working with me all around Monrovia and in the very village where she reported her circumcision story. I feared if I approached the women threatening her, they could follow me to get to her. But I did sit in on Azango's meeting with the police when she filed a statement, the first stage in a formal criminal investigation. I listened as the officers interviewed her to confirm that these were menacing threats, and not simply the careless words of angry readers. Azango thinks all of this furor is less about what she said, and more about who she is. "If it was a white woman or a foreign journalist doing it, nobody would have a problem" with the story, she said. "But because I'm a Liberian and I live in Liberia, I should know my role. I should know my line of demarcation." Azango expects things will eventually calm down, and she'll get to go home. And then, when the time is right, she says she wants to do a follow up story. Jina Moore visited Liberia on a program that pairs African journalists with American journalists to report on reproductive health issues. It is a project of the Pulitzer Center on Crisis Reporting.