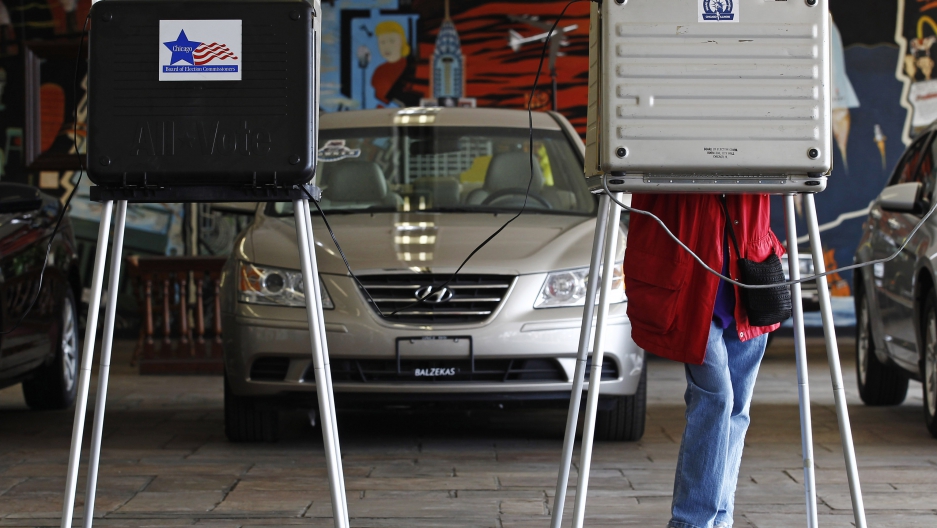 A voter casts her ballot in the Illinois primary at a car dealership being used as a polling station in Chicago, Illinois, March 20, 2012. (Photo by Jim Young/Reuters.)

If it's Tuesday in America in 2012, then there's an election going on — somewhere.

This week's contest will be in Illinois, where voters are picked to choose a Republican presidential candidate from among Mitt Romney, Rick Santorum, Ron Paul and Newt Gingrich. Romney has been performing well in polls recently and is widely expected to take the majority of the state's delegates. Santorum, meanwhile has shifted his focus to making sure that Romney can't get enough delegates to win the nomination on the first ballot at the Republican National Convention this summer. Romney needs about 49 percent of the remaining delegates to have an outright majority and win the nomination.

If he can't do that, then there will have to be horse trading and other deal-making in order to get to the majority needed. But Romney avoids that if he wins, which starts Tuesday night in Illinois.

The latest two polls out of Illinois, from last week and this past weekend, show Romney with a double-digit lead over Santorum. And nationally, Romney's on top as well. The latest RealClearPolitics.com average of national polls shows Romney topping Santorum by an average of 5.4 points — though that number has slipped a few tenths of a percent in recent days.

Illinois has 54 delegates at stake in Tuesday's contest. To win, Romney will need to win in and around Chicago. According to the New York Times, about 52 percent of voters in the Republican primary will be in those areas — and they're fertile areas for Romney supporters.

On the flip side, Santorum will be expected to do well in the downstate area, home to about 48 percent of Republican voters — the kind of Republicans that are more likely to support Santorum.

This is an unusual spot for Illinois Republicans. Rarely do they have a chance to influence the nomination to the degree they can Tuesday. All four candidates, have pledged to carry on whether they win or lose in Illinois. But a big win by Romney could push the other candidates to a point where they could no longer dramatically alter the race.