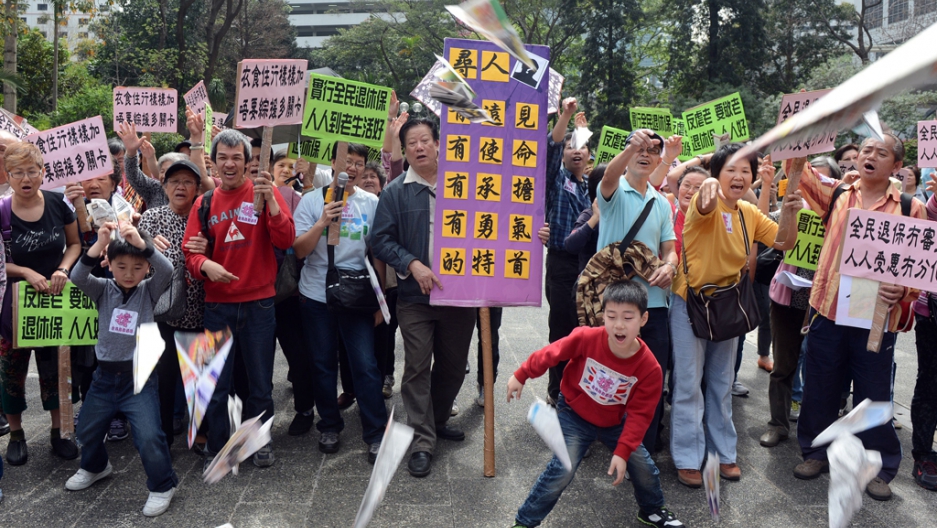 Protesters throw paper planes during a demonstration in Hong Kong on March 18, 2012. Next week's leadership election has riveted Hong Kong with all the political rough-and-tumble that is typical of a thriving democracy, but only 1,200 members of an election committee will choose the city's next chief executive.
Credit: LAURENT FIEVET
Share

More than 30 pro-democracy, student and civic groups in Hong Kong are planning to protest against the selection of the city’s next chief executive on Sunday, Reuters reported today.

Only 1,200 people will vote for Hong Kong’s next chief executive on March 25, all members of an election committee that consists of tycoons, professionals and pro-Beijing loyalists.

Henry Tang and Leung Chun-ying are the two businessmen and political elites with ties to Beijing who will seek to replace Hong Kong’s current chief executive, the embattled Donald Tsang.

Late on Monday, Leung called for an end to personal attacks as the contest has been mired in scandal and accusations between the candidates, Bloomberg reported. Leung said, “I have been continuously attacked by smear campaigns. These actions should come to an end and we should bring the election back on track.”

Leung and Tang called each other liars during a televised debate on March 16, and Tang has been caught up in scandals including a marital affair and illegal constructions. Tang spoke yesterday as well, saying, “This election has taken its toll on me, but still I insist on speaking the truth. I need to reveal the way (Leung) handles contradictory situations and crisis,” according to Bloomberg.

The Wall Street Journal took a closer look at the 1,200 member election committee, which represents .02 percent of Hong Kong’s population. Besides the super rich, there are accountants, doctors, lawyers, religious leaders and professors.

According to The Wall Street Journal, “when the Election Committee was set up in 1990 during the colony’s handover from the British to the Chinese, it was intended to be a 'broadly representative' body, a group that could gradually help shepherd the special administrative region on its path to democracy, one of the stated goals enshrined in the city’s Basic Law.”

However, it is also a system set up to facilitate Beijing's control over Hong Kong's politics.

Hong Kong's former civil service chief, Anson Chan, told Reuters, “It is a crisis of governance. It is, I think, symptomatic of both overt and covert chipping away at our values, at Hong Kong's high degree of autonomy, of Hong Kong people ruling Hong Kong.”

More on GlobalPost: Chinese cars, made in Bulgaria