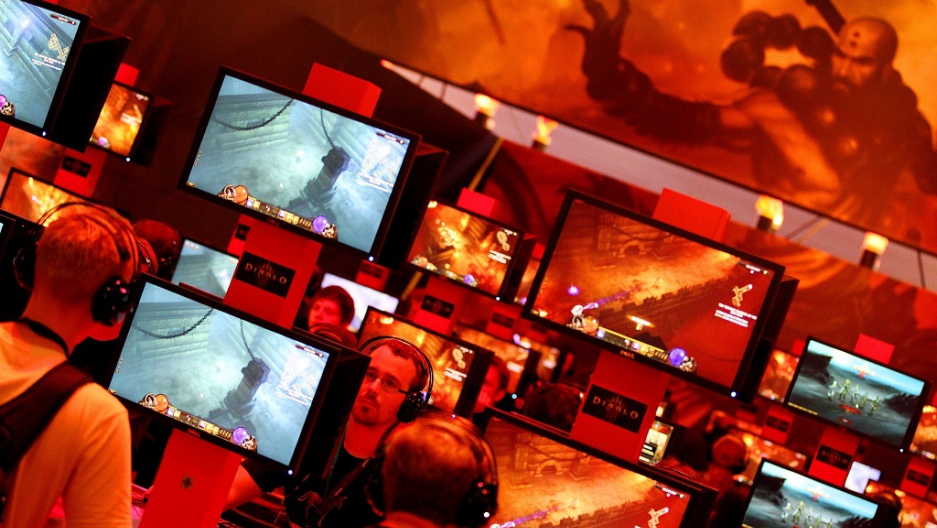 Computer gamers play in front of their screens on August 17, 2011 during the gamescom fair in Cologne, western Germany. The trade fair for interactive games and entertainment is running until August 21, 2011.
Credit: Oliver Berg
Share

I wrote this article last December when gamers around the world could only speculate about when Diablo III would be released. Now with May 15 looming, there's still been little discussion about the auction house part of the game and how it could affect real-world economies. It will still be intereting to see if the developing world will take advantage of the auction house for profit in the way it used World of Warcraft, gold farming, and power leveling.

Shouting in strange, digital languages at baleful, hyper-intelligent dragons is fun. So is clawing for a tactical edge in real-time, chess-like strategic melees. But it doesn’t make you money.

It is the one thing that has always eluded the underpaid nerds around the world, who suffer stoically at tedious jobs while dreaming of their computers at home — how to make a living on their obsession with gaming.

In parts of Asia, though, creative businessmen have begun to figure it out. In China and Vietnam, for instance, companies known as “gold farms” to Western gamers are employing real-life laborers in ever-growing numbers. They sit at computers and mine for digital gold in popular multiplayer online role-playing games like World of Warcraft (or WoW to those in the know), which the companies then sell to, mainly, Western players.

These transactions are done over Paypal and once a player has handed over the real money, someone approaches the character in-game and hands over the fake gold.

While paying actual dollars for digital currency may seem absurd, many serious gamers find paying for gold to be much less costly than spending the substantial number of hours it requires to accumulate the digital currency in the way the game’s developers intended, like, say, by vanquishing an endless parade of foes.

For countries like Vietnam, these digital economies are yielding substantial real-world rewards. According to a World Bank report released in April, selling digital goods for real dollars is proving so lucrative in some developing countries that it could pay for much-needed infrastructure projects.

It seems that World of Warcraft gold you just paid $20 for is fair trade. So enjoy guilt-free gaming.

The makers of WoW have always stood against this practice, banning the accounts of players and farmers who participate in it. The game’s designers say that just as printing money drives up inflation, farming digital gold can ruin an in-game economy and eventually drive players away.

For a game that survives on a $15 a month subscription, that’s something that WoW’s developers, the Blizzard Corporation — the Starbucks of the electronic entertainment industry — says it can’t afford.

But as any young, street-corner libertarian will tell you (over and over and over again), legalizing drugs or prostitution saves you money and raises tax revenues. That message may have resonated with Blizzard.

So now, instead of trying to police millions of gamers, the Blizzard Corporation is trying a new strategy, one that would embrace the digital free market and help it make some extra cash in return.

For their blockbuster 2012 release of the third installment of the wildly popular Diablo series, Blizzard will include a venue for selling in-game weapons and gear for real money, a move that could significantly expand the market for digital gold farmers in the developing world, and even in the West. The gaming community is abuzz with fantasies of moving out of their cubicles to sell digital demon-slaying equipment full-time from wherever they please.

In exchange, Blizzard will take a “nominal” commission for the sale of these items.

Not everyone, of course, has embraced the change. While the scope and profitability of the Diablo III marketplace is as yet unknown, some gamers, a wily and rarely satisfied bunch, worry that the priorities of developers will shift from creating an engaging, entertaining experience into creating profitable game scenarios — all the while collecting money from your average Vietnamese loot farmer.

In an August interview, Blizzard's vice president of game development, Rob Pardo, assured the community that the company was being honest about the real-money marketplace.

"The way we're trying to do the transactions, there's not really an obvious example of how we can design the game differently or manipulate the game that would somehow turn into more revenue on the auction house. I want to protect us or the player base from those possibilities,” he said.

While it remains to be seen if Diablo III’s economy will yield the same demand for digital goods as World of Warcraft and thus further expand the third-party gaming services industry in the developing world, incorporating real dollars into digital ones will almost certainly change the face of gaming.

So be on the lookout this holiday season for sales on demon-slaying rune swords and enchanted plate mail. It might be the perfect gift for the gamer in your life.