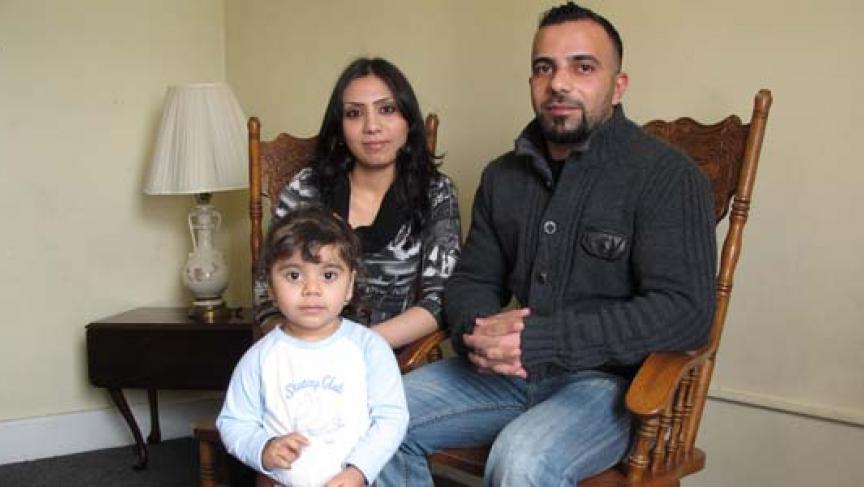 The Aluslamawi family relocated to Lowell, Mass., after working for the U.S. in Iraq. (Photo by Marco Werman.)

Editor's note: This is part of a special series from PRI's The World focusing on the lives of veterans who have returned from Iraq. See more stories from the series at TheWorld.org.

As American vets return, there are others who have followed them to the United States from the wars in Iraq and Afghanistan.

Iraqis, for example, who worked alongside American soldiers in Iraq.

Some of them have settled in Lowell, Mass. — about 45 minutes north of Boston. It’s a small, former mill town. With the snow and ice that covered the streets recently, it seems an unlikely destination for Iraqis.

But there are two Iraqi restaurants in Lowell. One of them, Babylon, is located on the main drag. It helps to ease the homesickness for the 50 Iraqi families who now call Lowell home.

Ahmad Alnuslimawi arrived in Lowell about four months ago. He lives with his wife and daughter on the second floor of a row house where cold drafts bleed into the hallways.

To look at him, it seems Alnuslimawi’s time working for American troops in Baghdad has influenced his style. He’s clean cut, his beard is precise and his body is in top physical shape. He looks like a U.S. soldier on leave.

After high school, Alnuslimawi got a job with the U.S. Army as a translator. Almost every day for five years, he went everywhere his American company of soldiers went, patrol after patrol.

He wore the same uniform as the American soldiers and faced the same risks of being attacked, of being blown up. But there were other risks as well, risks his American army colleagues did not face.

“When I go out and translate for the U.S. Army, people look at me like you’re not a good guy. And some of them say to me, face to face, you’re going to get killed one day,” Alnuslimawi said. “Some of my Iraqi police I used to train with U.S. troops, they were from my neighborhood. They went to high school with me. So they knew who I am. They knew where I live. They knew where my parents live, where my daughter and wife live. So once these people tell other people, I’ll be done.”

Still, Alnuslimawi was earning a living, and at least he was working with people who had become his friends. But in 2010, things started to change. The U.S. began its pullout from Iraq.

“I was enjoying working for the U.S. Army. When these people starting pulling over out of Iraq, I was like – it’s time to leave Iraq, because if these guys leave I’m pretty sure I’m going to get killed or whatever else is going to happen to me. The military helped me a lot with immigration. They signed all my papers. They helped me a lot,” he said.

Alnuslimawi resettled in Lowell with his wife and daughter. He got help from the State Department and the International Institute of New England. They’ve provided this apartment and a small income while he looks for work.

Today though, Ahmad is meeting some new Iraqi friends – who also live in Lowell – for lunch. Ahmad greets a diminutive older man. They pat each other on the back and chat in Arabic. This man is also named Ahmad. He is the manager of the Iraqi restaurant, Babylon.

It’s owned by Ahmad’s 25-year-old daughter, Leyla Al-Zubaydi. The Zubaydi family got to Lowell a little over a year ago. She said her family didn’t know what to expect when they arrived in Lowell.

She said it was her father’s idea to open a restaurant.

Their resettlement agency helped the Zubaydis with the paperwork to secure loans and grants to open Babylon.

But the adventure has had its ups and downs. Earlier this year, a man threw a brick through the front window of Babylon. It prompted a strong reaction within the Lowell community. A large group of local vets organized an “eat-in” at Babylon – filling the 50-seat restaurant.

Ahmad al-Zubaydi doesn’t know why his window was smashed ... but he sees only the up-side.

“This incident gave me more friends,” Zubaydi said. “A lot people come here to support us. I cry and my wife cried because I’m happy because I have a lot more friends.”

And not just new American friends, like the vets and the companions they brought to Babylon. But they’ve made Iraqi friends too. Leyla translates for her father about something he didn’t expect the broken window would lead to.

“The Iraqi community here after that incident we had — they made the Iraqi people together. It doesn’t matter, whethere they are Sunni, they are Shia, they are Christian, they became closer to each other. They became more supporting to each other. We were that seed that made that flower grow,” Ahmad al-Zubaydi said.

That flower is blooming at Babylon. For Leyla and her family, the restaurant has brought new friends, a sense of community and a livelihood. For new arrival Alnuslimawi, though, resettling as a refugee in Lowell has been a mixed blessing. He’s made new friends and has found a community. But he needs a job. And he wants to continue working as a translator — even if that means going back to Baghdad for a stint inside the Green Zone.

In that respect, Alnuslimawi is very much like many American vets — his biggest battle now is to find work. But unlike those vets coming back to a place they know as home — Alnuslimawi is trying to build a new life from scratch.