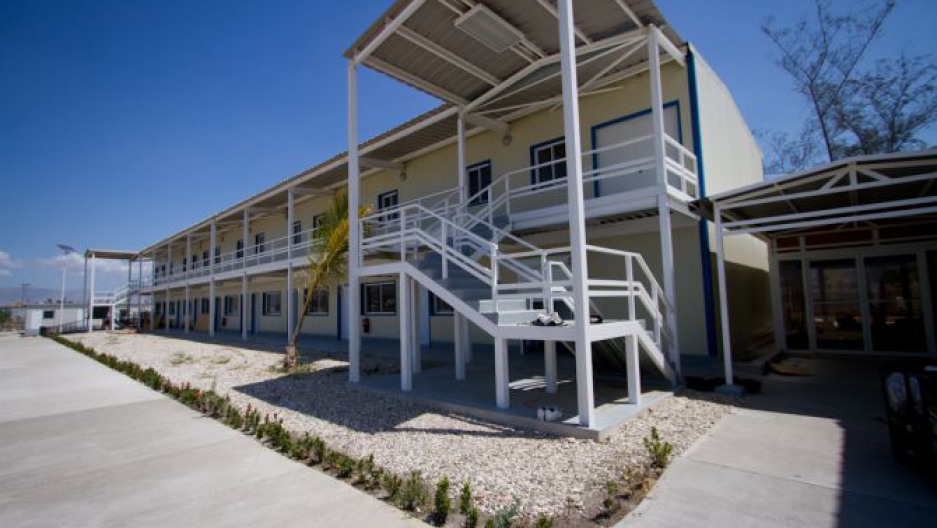 PORT-AU-PRINCE, Haiti — One Friday last November, US Ambassador to Haiti Kenneth Merten joined Haiti’s President and then-Prime Minister at the edge of the Caribbean Sea in downtown Port-au-Prince.

To much fanfare, the trio inaugurated a $1.9 million US-funded building meant as a temporary home for Haiti’s Parliament, which had lost its old building and 32 of its staff members in the 7.0-magnitude earthquake that struck Haiti in January 2010.

“The Haitian Parliament, which has a critical role in building a better Haiti, now has a location befitting its importance to good democratic governance on behalf of the Haitian people,” Merten proclaimed.

But more than four months later, that location remains vacant. The building is scattered with woodwork trimmings and debris from a costly ongoing renovation paid for by the Haitian treasury because legislators say the United States never finished the job. And critics in Haiti charge that the unfinished work and empty building stand as a powerful metaphor for much of what is wrong with USAID’s approach to development in Haiti: that it lacks coordination with and input from the Haitians themselves about how best to undertake reconstruction projects.

"It's the direct consequence of the lack of participation by Haitians in the reconstruction," said Jean Claude Fignole, Haiti country director for the organization ActionAid, which advocates for Haiti's impoverished.

What the US Agency for International Development (USAID) gave Haiti was just the shell of a building that lacked even interior walls to divide the legislative offices. The offices have no desks, chairs or file cabinets, and the chamber meant to hold the joint session of Haiti’s upper and lower houses resembles an empty high school gymnasium.

“What are they going to do, sit on the floor?” asked Senate Treasurer Fritz Carlos Lebon as he toured the chamber. Now, Lebon says the Haitian people are left to pay the remainder of the bill for the United States’ unfinished work. Already, they’ve spent approximately $775,000 to renovate and finish the building and much work still remains.

“I don’t know if the amount of money we have is even enough to finish it,” Lebon said. His counterpart in Haiti’s Chamber of Deputies, Cholzer Chancy, listed off the unfinished work before concluding, “It may cost more for us to renovate it than for them to build it in the first place.”

U.S. Embassy spokesman Jon Piechowski said “the offer was to provide a building,” never to furnish it or alter it to the wishes of Haiti’s current Parliament, which entered office after the initial agreement was approved.

“We are spending US taxpayer money on all projects, and while we are here to help the Haitian government and the Haitian people, there are resource constraints,” he said. “Haitian institutions have to fund all sorts of priorities on their own.”

But legislators say the costly renovation might have been avoided if USAID had invited their predecessors in the previous legislative session to participate in the design process. Instead, “The US said ‘this is what we’re offering,’ and the president of the Senate accepted,” according to Ariel Joseph, Secretary General of Haiti’s Senate.

The Senate president at the time, Kely Bastien, said USAID approached him seeking approval for the project only after officials had already determined the building’s design. “I didn’t know all the details because I’m not an engineer,” he said.

Because the USAID’s building did not allocate space for entryways, waiting rooms, secretaries or interior bathrooms for each office, Lebon says the final, renovated building won’t hold nearly all of Haiti’s 129 legislators as USAID claimed it would.

“This is all the space they’ve allotted to the Senate,” Lebon said, pointing to an area he says will eventually house just four of Haiti’s 30 senators. “Even I won’t have an office.”

Said Chancy: “It’s like they didn’t even know how many senators and deputies Haiti has.”

Fignole, the country director of ActionAid, says in order to successfully implement US aid to Haiti’s reconstruction, USAID must directly engage the Haitian citizenry in the process.

ActionAid recently organized a protest of thousands of Haitian peasants to march on Parliament demanding land reform necessary for rural families to sustain themselves through agriculture, something Fignole says is in line with his organization’s stated mission of “emphasizing the participation of citizens and the ability of the poor and excluded to claim rights, make decisions and hold institutions to account.”

But Haitian citizens had no direct say in USAID’s Parliament building, and the $1.9 million contract was given to Chemonics International Inc., the largest single recipient of USAID money since the earthquake.

In a video on the Chemonics website, the company’s senior Vice President for Haiti, Rhett Gurian, calls it “a project that allowed the government to function again” — an ironic statement for a building that remains unused.

Some lawmakers say they’re grateful to the United States for funding the building despite the lengthy delays caused by expensive renovations because they currently lack even a chamber large enough to hold a National Assembly in which both houses convene together.

More from GlobalPost: 'We need to tell them the history of Haiti’

After the earthquake, Haiti’s battered Parliament first began working out of the cramped quarters of a police academy on the outskirts of the capital. In April 2011, the United Nations spent $700,000 to build temporary structures to house some legislators until the USAID building was completed.

“It’s not a waste — they will use it eventually, once they finish transforming it,” Joseph said. “We’re very happy they gave it to us, but for us to enter it needs to be transformed.”

That may take a while, according to Lebon, who says Parliament had hoped to begin using the building this month but may now have to wait until April or later — more than five months after USAID inaugurated the building. Even that structure is only meant to house Parliament until the building that will serve as its final, permanent home is finished — a construction process likely to take several years. But because the temporary offices where Parliament currently operates are situated on the land needed to build that permanent structure, work can’t begin until legislators move into the US building that is still undergoing renovation itself.

Piechowski, the US Embassy spokesman, points out that USAID and the contractor, Chemonics, fulfilled their contractual agreement with Parliament when it handed over the building to them in November.

“We explained to them what could be done, we consulted with them on that, and they approved the project,” he said. “We answer to the American people and we need to be good stewards of their tax money, and I think we’ve done that in this case.”

But to the half a million Haitians who remain displaced to tents and shacks since the earthquake, the $2 million US aid dollars spent on an empty building and the hundreds of thousands more taken from the Haitian Treasury to renovate it seem inexcusable.

“All the time, I hear on the radio that American money is going here or there,” said Acelus Saint Louis, a 45-year-old who lives in a tent with his wife and two children. “But I don’t see it. This could lift us up, but instead it’s just wasted.”