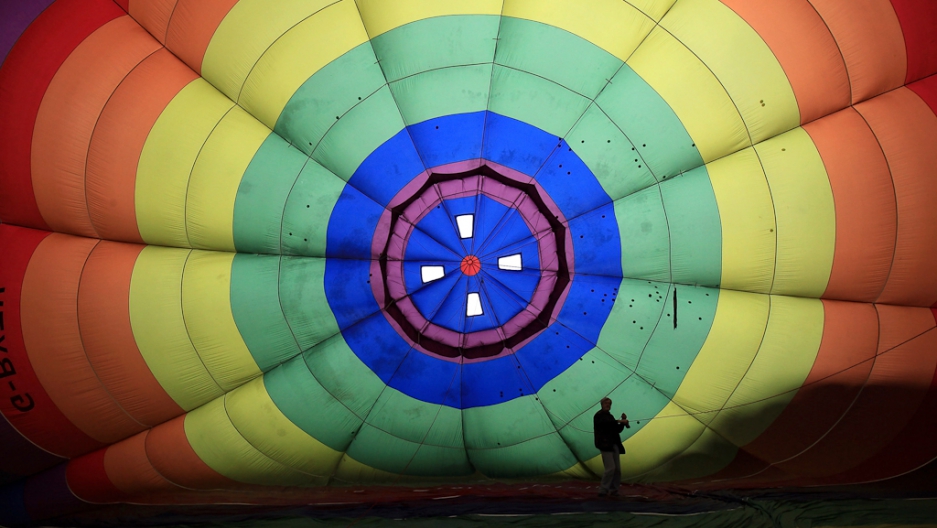 Hot-air balloons begin to rise during the early morning mass assent which saw over 60 balloons launched at the Bristol International Balloon Fiesta at the Ashton Court estate on August 12, 2011 in Bristol, England.
Credit: Matt Cardy
Share

Rescue teams on Monday found the body of a hot air balloonist who crashed in Georgia three days earlier.

North Carolina resident Ed Ristaino's balloon was sucked into the updraft of a thunderstorm on Friday evening, then sent plummeting 17,000 feet to the ground, CNN reported.

"We were relieved that we found him," Ben Hill County Sheriff Bobby McLemore told CNN. "But that still leaves recovery."

Two of the skydivers said Ristaino kept them safe by spotting a field where they could safely parachute and telling them to jump as the storm approached, according to the AP.

"If we would have left a minute later, we would have been sucked into the storm," skydiver Dan Eaton of Augusta, Ga., told the AP.

An updraft carried Ristaino up to about 17,000 or 18,000 feet before a downdraft collapsed the balloon and sent him plummeting, the Charlotte Observer reported.

Ristaino stayed calm and talked to his ground crew on the radio the entire time he was falling, according to CNN.

The balloonist said he was falling at 2,000 feet per minute, but an altimeter reading says he may have been falling as quickly as 60 to 90 mph, McLemore told CNN.

"As he was falling, he did a countdown. He couldn't see anything because he was in the clouds. But when he broke through the clouds, he said, 'I see trees,' and that's the last the last thing they heard," McLemore told CNN.