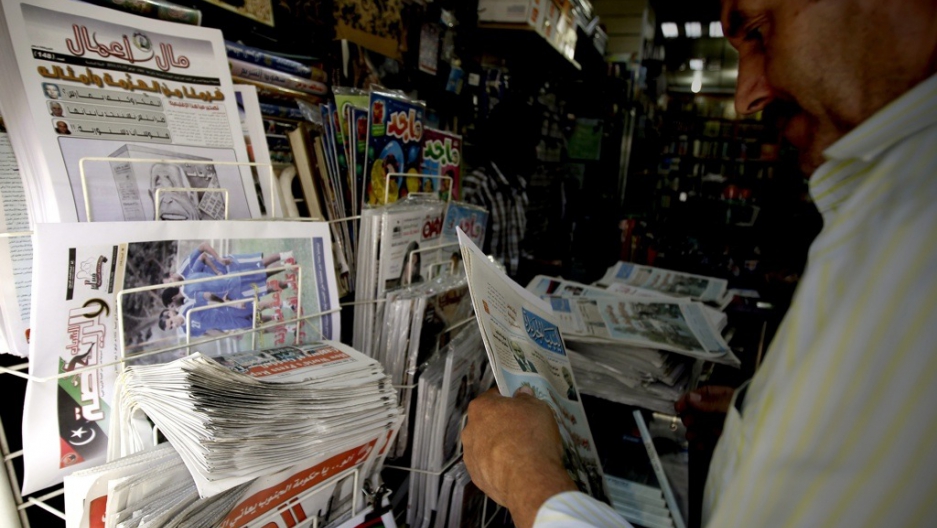 A Libyan man buys a newspaper from a newstand in Tripoli on Nov. 15, 2011. Media outlets are witnessing a huge expansion in Libya after the country's revolution.
Credit: Joseph Eid
Share

TRIPOLI, Libya — On a recent day in Tripoli, 20 different newspapers lay scattered across a newsstand. A lone customer glanced through the selection. Most featured heroic frontline battle scenes, others, images of street celebrations.

Deprived of free speech for 42 years, Libyans have seized the opportunity to publish and broadcast with energy and enthusiasm. Hundreds of newspapers, countless websites, television and radio stations have sprung up from nothing.

The problem: training and management is lacking. With little experience and no foundation to build on, this emerging media scene is struggling.

“We are yet to see even semi-professional reporting,” said Jamal Dajani, the regional vice president for Internews, an international media development organization." TV reports are dominated by unfocused footage and "amateur standups," he says. "There are no standards on presentation. Long reportage and news packages are jumbled together like a mixed cocktail.”

In-Depth Series: Libya: The rebels after the rebellion (VIDEO)

While government censorship has been almost nonexistent under the new system, Internews has expressed concern about “self censorship” and “public pressure” to omit information that may be deemed “against the revolution.”

A year ago, Libya’s entire newspaper industry consisted of only six government-run papers. Television and radio were completely state-owned and international news was heavily censored. Dajani described it as a “one-man media” operation designed to promote former leader Muammar Gaddafi and his family.

As the new government and constitution begin to take shape, Libya’s media has failed to shift from advocacy to neutrality.

“We are counting on this independent media as a pressure body, a guarantor of the democracy of this country,” said Hassan Alamin, a human rights advocate and one of Libya’s most highly-regarded journalists. “A strong media will play a big part in protection against corruption, supporting the change to real democracy and uncovering any real wrongdoing.”

More from Libya: Inside Gaddafi's Libya: 44 days of captivity

But Alamin admits it will take time and effort to professionalize Libya’s media.

“Everyone is out there saying something, but it’s quantity not quality,” he said. “The whole operation is run like wild. It’s out of control, but now is too early to make a judgment.”

Alamin believes a natural filtering will begin to take place, with many media outlets disappearing and competition pushing the quality to a higher standard, he said.

“In six months we will see a very different media emerging.”

But despite Alamin’s optimism, Libyan journalists are rebuilding the media on a thin base. The former regime's repression left little chance for most journalists to develop core skills. Even those considered professionals did not have the chance to work in any real capacity as journalists.

As Dajani put it, trained Libyan reporters have been “paralyzed” for the past four decades and in the eyes of the new generation they now have “zero credibility.” The new landscape has emerged largely through the efforts of unskilled but enthusiastic amateurs.

Those who have managed to return to media roles have found a very different environment.

More from GlobalPost: Libya's security depends on former rebels, for better or worse

“Before we could only write what they told us to write. The difference now is so big you would never believe it,” said Seham Alsahali, who has worked as a journalist in Misrata for the past four years and is now making the most of her first opportunity to write about women’s rights. “I could have been executed for just thinking about writing these things in the past.”

In the early days of the revolution, Alsugmarny said his uncle was one of dozens of rebel captives threatened and beaten into giving false testimony on state television. Using beatings and threats to his family, the government forced him to speak of American troops and foreign gangs stealing, raping and murdering in Misrata.

Such offenses made Libya's former media nothing more than a joke, Alsugmarny said.

“Now we have freedom and the chance to speak the truth,” he said. “This is our chance to make our mark internationally, to build something big like Al Jazeera.”

According to Dajani, Libya’s chance of reaching such international standards will depend largely on the development of media laws and licensing. Until now, things have developed ad hoc. Libya needs to draw on international experience to develop laws that go beyond censorship and privacy to protect media institutions and journalists, rather than government, he said.

“What is needed are journalists and people who care about media to be sitting around the table rather than judges and the government, so negotiations need to start now,” Dajani said. “There is always a risk during transition periods. There is always the threat of government control. There will always be surprises. Professional training is needed. It would be disastrous to reach the upcoming elections without it.”