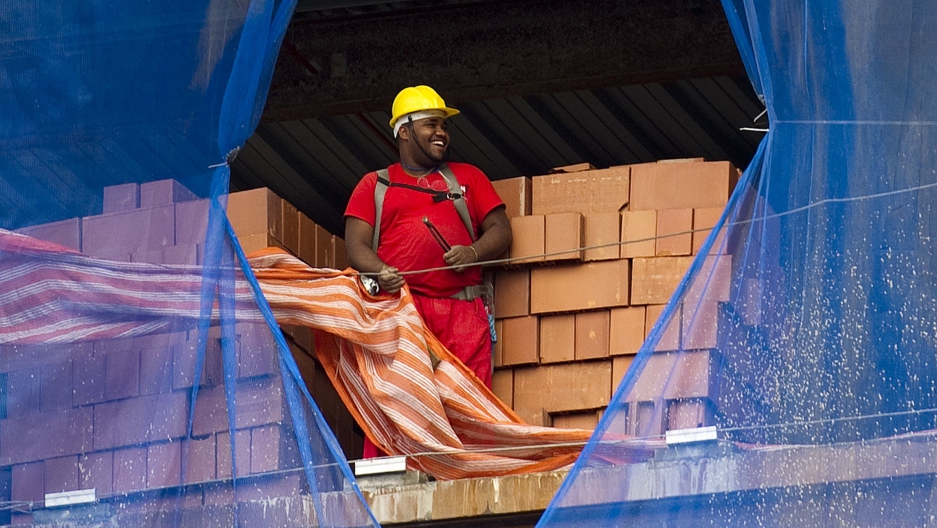 All smiles? Not quite. Brazil's economy is not growing like it was, so workers like this builder in Rio de Janeiro could become a bit less cheerful.
Credit: ANTONIO SCORZA
Share

RIO DE JANEIRO, Brazil — The sweetheart of many international investment portfolios in recent years, the Brazilian economy had been enjoying a spectacular boom. Fortunes were made on the mushrooming property market. Consumption had soared, with Brazil’s new middle class maxing out their credit cards at malls — just because they could.

Business was going swimmingly for Brazil — until it started to flounder in the second half of last year.

As the euro zone crisis deepened, Brazil’s economy stumbled. It had cruised along at a 7.5 percent growth rate in 2010. By the end of last year, some analysts revised growth predictions in 2012 to 3 percent, paltry by recent Brazilian standards.

The truth was even worse than it might have seemed, according to data released in February by IBGE, Brazil’s official statistics bureau. Gross domestic product (GDP) in 2011 grew by just 2.7 percent — the second-slowest pace since 2003 — and Brazil skidded dangerously close to a recession.

Richard Hamilton, head Latin America risk analyst at Business Monitor International (BMI), was not surprised by the news. For him, what goes up must come down: “Brazil’s economic growth slowdown was largely cyclical in nature, and coming off the back of such strong growth in 2010, it is not particularly surprising.”

So just how did such a dramatic reversal come about?

Brazil’s boom was built on the twin engines of commodities and consumption.

Brazil exports minerals (such as tantalum, used in cell phones) and raw materials (such as coffee and sugar) to countries including China. Abroad, factories turn these exports into finished products, to be sold on to consumers in Europe, the US and the rest of the world.

When North America sputtered and the euro zone crisis took a turn for the worse mid-way through last year, shoppers worldwide started tightening their belts. Back on the supply end, demand for Brazil’s exports began to dry up, causing industry to slump.

More significantly, around the same time Brazilians began to feel the effects of interest rate hikes, put into effect in the first half of last year. Making credit more expensive had been a deliberate, slow-burn attempt to cool inflation by reducing private spending.

With Brazilians already nervous about the global uncertainty, the government’s plan worked. Consumption — which had been the primary engine of growth in recent years — stalled.

So what’s the prognosis?

Gustavo Mendonça, chief economist at Oren Investimentos, says, “this slowdown by itself is not worrying, because it was largely induced by some economic policies that Brazil itself put in place. Therefore, [we have] all the tools to reverse it, as is being done right now.”

Hamilton also believes it’s not such a big deal: “Consumer credit had expanded at an alarming rate, raising serious question marks about the health of the banking sector and the potential for a credit crunch. So in some respects, a cooling down was what the economy needed.”

Starting in October last year, the Brazilian Central Bank responded to the slowdown by lowering its basic interest rate, to make credit cheaper and ramp up private spending again.

Target interest rates were slashed from highs of 12.5 percent through August last year, to just 9.75 percent as of last week.

The bank is also trying to stimulate lending through so-called “macro prudential” measures: “Basically, tools that affect banks’ balance sheets in a way that makes them more willing to lend,” Mendonça explains.

The Finance Ministry has also reduced taxes in certain sectors, and plans to spend less on wages and more on investment — a mix it hopes will be more pro-growth and less inflationary.

More from GlobalPost: Brazil under fire for World Cup revamp

Now the government and economists are more upbeat about Brazil's 2012 growth prospects than they were late last year. BMI forecasts real 2012 GDP growth of 3.9 percent, and the government is shooting for closer to 5 percent. However, many analysts reckon Brazil will only see the benefits of its latest stimulus measures in the second half of the year.

And in the long term?

Hamilton predicts a troubling picture further down the line. He says, “[By employing these measures] the government is exacerbating some of the structural imbalances in the Brazilian economy, which are likely to come to a head at some point over the next few years.”

He warns that Brazilian consumers are some of the most highly leveraged in the world, and that by increasing the propensity to consume rather than save, the authorities are incentivizing households to take on even more debt.

He is also concerned that although Brazil's currency, the real, has dropped in value compared to its peak of around 1.55 in July last year, it has remained comparatively strong at 1.82 to the US dollar. That's causing Brazil’s export competitiveness to suffer and making life hard for manufacturers.

“In short,” he says, “Brazil is consuming a lot more than it is producing, and at some point this has to end — or at least slow down — although how and when this will play out is hard to call.”