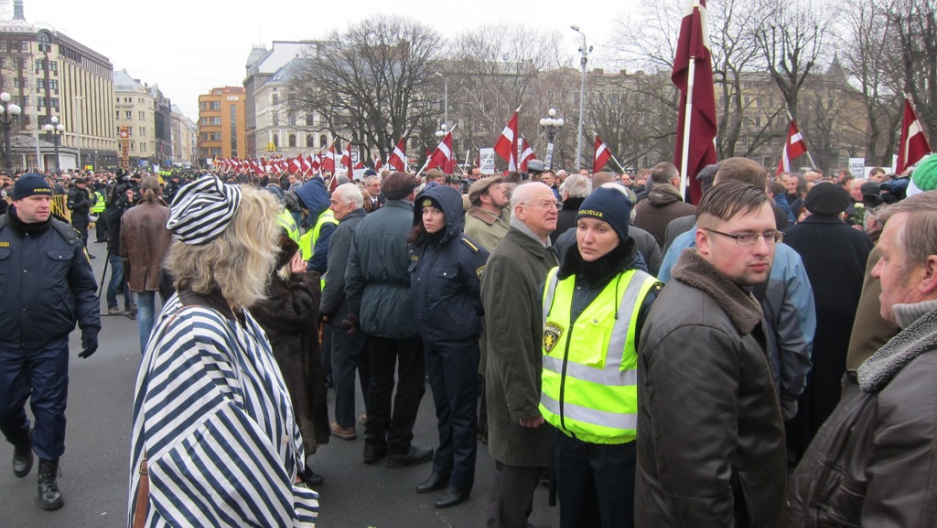 The Latvian capital has become one of the centers for the disturbing trend in much of the eastern borderlands of Europe for glorifying Nazi collaborators. The marches have become a flashpoint. 1,000 police lined the route the 1,500 Nazi nostalgics marched along.

Many locals regard the Latvian Legion of the Waffen-SS as freedom fighters, who fought the Soviet Union. Others regard the legion as Nazi collaborators.

Monica Lowenberg, a British academic, many of whose family were murdered in Riga by the Nazis, attended today's event dressed in the prison stripes Jews were forced to wear after the Nazis rolled into the area in June 1941. 90 percent of Latvia's Jewish population was murdered in the following 18 months, including 25,000 marched from the Riga ghetto, to a forest outside the city and machine-gunned to death over a two week period in late 1941.

Waffen SS apologists note that the Legion wasn't formed until after the Jews of Latvia were effectively wiped out so they can't be blamed. But historians note that there was some cross-over among those who joined the SS and those who had helped the Nazis carry out the liquidation of the Riga ghetto.

Speaking by phone, Lowenberg, said she had spoken with a number of marchers and was struck by the strong feelings of anti-Semitism that still exist. "It's not surprising, if you have a day of celebrating Nazi-ism, you will have a day of anti-Semitism." She noted the irony that many young people on the march grew up anti-Semitic in a country where there are virtually no Jews left.

This is the second march in the Baltics this week honoring Waffen SS fighters. Last Sunday in Vilnius, Lithuanians marched to remember their Nazi units.

These are not fringe events. Today's march was endorsed by Latvia's President Andris Berzins.

More on the story here.