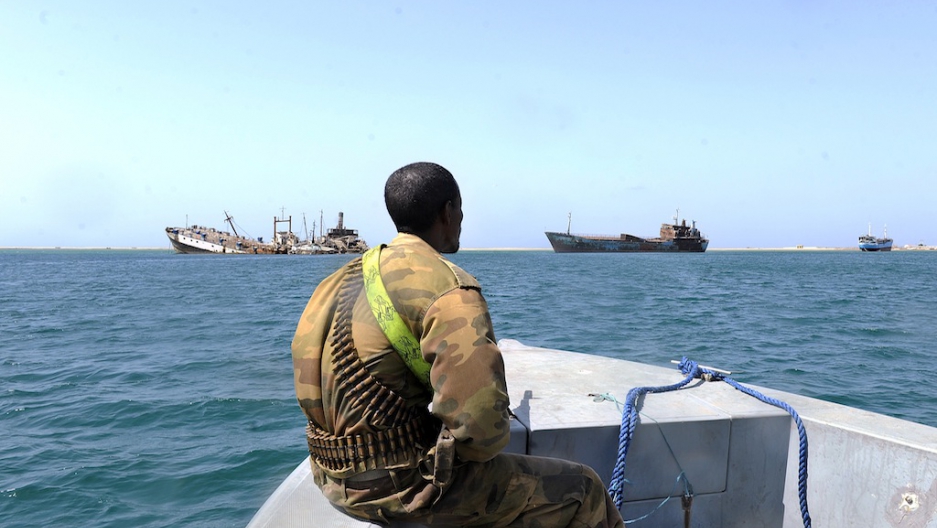 NAIROBI, Kenya — Just a couple of years ago, nations with large navies looked with suspicion at the private, armed guards that some ships were using to ward off pirates.

These days, such guards are embraced as the best defense against increasingly desperate, greedy and violent pirates.

"The unique selling point for the security companies is that to date no ship with armed guards has been hijacked," said Stephen Askins, a leading expert on maritime security and piracy at the international law firm Ince and Co. International Maritime Bureau (IMB) figures confirm this.

Armed guards are now on about 1,500 voyages every month, according to the Security Association for the Maritime Industry.

"About half of all ships [now] use armed guards, up from 25 percent a year earlier," said Andrew Mwangura, editor of the Piracy Report, a journal in Mombasa.

Providing ships with security is a lucrative and growing business: Ship owners spent over $1 billion on “security equipment and armed guards” last year, according to "The Economic Cost of Piracy," a report by One Earth Future, a non-governmental organization promoting better governance.

Hiring a four-man team for a single voyage through pirate waters costs about $100,000, according to security experts. They say there are hundreds of these teams operating off the Somali coast at any time.

While armed guards are key, other measures have helped as well.

Shipowners have built citadels — fortified ‘panic rooms’ where the crew can be safe from assailants while maintaining control of the vessel. They've also deployed razor wire or electric fencing around the ship’s bows, and water cannons or acoustic devices, which direct a deafening high-pitched whistle at pirate boats.

Together these measures have reduced the success rate of hijackings to about one in four attacks — even as the number of assaults continues to grow.

Despite success, the private security business has its detractors. Critics say because the industry is relatively new it is poorly regulated. They say it attracts cowboys and mercenaries, and may spark an aquatic “arms race” with more deadly shootouts at sea.

According to a briefing note on the topic from Ince & Co, this has already happened and probably more than once. "Distinguishing between fishermen armed to protect themselves and pirates intent on hijacking a vessel should be possible but perhaps only at the last moment," it warned. "There has undoubtedly been at least one incident where an armed security team have engaged a fishing boat with devastating effect."

Some new trade groups, such as the Security Association for the Maritime Industry (SAMI) set up last year, are seeking to establish a self-regulatory code of conduct.

There are also legal complications in port. On the high seas the vessel is under the jurisdiction of the flag state in which it is registered. But a docked ship falls under the law of the port’s state and many countries prohibit armed guards. To avoid trouble while a ship is docked, guards lock their weapons in the vessel's safe.

In 2011 the number of flag states permitting the use of armed guards grew. Now more than a dozen countries, including the US, allow private armed security aboard their vessels. Others, such as France, deploy their own marines on nationally flagged vessels.

Maritime protection firms are not alone in the security sector in benefitting from the piracy windfall.

Nairobi is home to many private security companies, often set up by British former Special Forces operatives and staffed by a mixture of ex-diplomats, ex-soldiers, ex-spooks and other toughs. These companies focus on hostage negotiations and money-drops.

They are highly secretive but in May last year one of them, the Nairobi-based Salama Fikira, found itself under scrutiny after one of its teams was arrested at Mogadishu airport while carrying $3.6 million in ransom cash to pay for the release of two vessels, one Egyptian and one Chinese.

The six men — three Britons, an American and a Kenyan — were sentenced to between 10 and 15 years each, but were released five weeks later after paying $100,000 in fines and having their bags of money confiscated.

Salama Fikira is a fairly typical outfit: Founded in 2005, it is based in Kenya and the Indian Ocean island of Mauritius. One founder is Kenyan-born Conrad Thorpe who served in both the Royal Marines and Special Boat Service (SBS). Co-director Rob Andrew served in the Special Air Service (SAS).

The risks of such security firms might be high, but so are the rewards. Industry estimates put a figure of $1 million as the security company’s takeaway for a successful money drop.

Other private companies are working on a longer term solution. Nairobi-based Halliday Finch, run by a former British military officer, has struck a deal with Somalia's Transitional Federal Government in Mogadishu to rebuild its defunct coastguard.

The company has a five-year plan to train and arm a 1,500-man force to be deployed along Somalia’s coast. The coastguard will seek to discourage pirates from setting sail as well and to stop smugglers and illegal foreign fishing, that Somalia's prime minister cites as a key cause of the piracy.

“There are a lot of counter-piracy initiatives underway but they are all operating on the periphery,” said Col John Steed, a former British officer and military advisor to the UN on Somalia who now works at Halliday Finch. The UN Office on Drugs and Crime builds prisons and funds trials while the foreign navies patrol the seas, he said, “But there’s nothing at the center. We will be that core.”

More from GlobalPost: 3D Printing: Your body parts, made to order