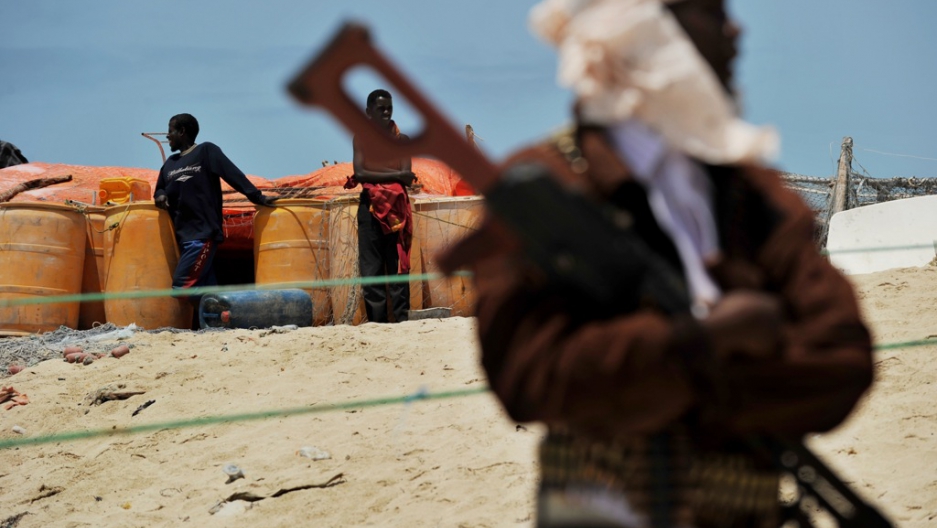 A pirate folds his arms over his high-caliber weapon near two boys standing next to plastic drums filled with gasoline on a beach in the central Somali town of Hobyo on August 20, 2010.
Credit: Roberto Schmidt
Share

MOMBASA, Kenya — Tugs ply the oily waters, leading immense cargo ships down the narrow channel towards the towering cranes of one of Africa's busiest ports. Yet despite the bustle, Mombasa is feeling the pinch from the piracy flourishing around it in the Indian Ocean.

The cargo held in the long, low-slung container ships that dot the horizon is more expensive. There are no cruise liners to be seen. These changes are a direct result of Somali piracy.

Since the US-flagged Maersk Alabama was attacked by pirates in 2009 on its way to Mombasa, the dangers of approaching the port are widely known. Officials at the port have warned of losing trade to other regional competitors, like Tanzania's Dar es Salaam.

The cruise industry was damaged by the hijacking of the French luxury yacht Le Ponant in 2008.

"We used to get around 40 cruise liners every season, this season there was only one and I think it was there by mistake," said Bernard Osero, a spokesman for the Mombasa Port Authority.

Osero said Mombasa port is working hard to maintain its share of the cargo market. He said cargo volumes and container numbers are both increasing steadily, with close to 20 million tons processed last year. But higher insurance and other costs means goods are more expensive. "The consumer pays," said Osero.

The economic cost of the piracy reaches far beyond Mombasa's cargo-clogged port to Kenya and deep into central Africa to the Democratic Republic of Congo and the new nation of South Sudan. The impact of Somalia’s piracy has been felt both further away and closer to home as two recent studies have shown.

The Colorado-based research and advocacy group One Earth Future Foundation estimated that the total cost of piracy in 2011 was as high as $6.9 billion, according to the annual "Economic Cost of Somali Piracy" report published by its Oceans Beyond Piracy program.

Ransom payments are the most obvious cost created by piracy. The magnitude of these reportedly reached a new record in April 2011 when Greek owners paid $13.5 million for the release of the Irene, an oil tanker.

While ransoms increased during 2011 to average $5 million per vessel, the $160 million in ransoms paid for 31 ships last year were only about 2 percent of the total cost of piracy, wrote Anna Bowden, the report's author.

The cost of attempting to prevent and protect against piracy far outweighs the ransom payments themselves.

The largest share — roughly 80.5 percent — is borne by the shipping industry, mostly in the form of extra fuel consumed while steaming through dangerous waters at faster than usual speeds. To avoid pirates riskier parts of the high seas ships take longer routes along India’s west coast. Firms must now give danger pay for seafarers. In case their vessels and crews are seized, ship owners have paid “war risk” and “kidnap and ransom” insurance worth $635 million.

No ship travelling at more than 18 knots (21 mph; compared to a ‘normal’ speed of 12 knots) has been successfully hijacked, but the fuel costs of increased speed came to $2.7 billion for container ships alone, Bowden calculated.

Governments that provide warships and sailors to the anti-piracy navies patrolling the Gulf of Aden, Indian Ocean, Red Sea and Gulf of Oman where most pirate attacks now take place account for the other 19.5 percent of the total costs.

They spent $1.27 billion on “administrative and headquarter operations, military vessels, aircraft and unmanned aerial vehicles.” More than 30 countries that provided warships either unilaterally or as part of the three naval coalitions headed by the European Union (EUNAVFOR), NATO (Operation Ocean Shield) and the US (Combined Task Force-151).

Bowden found that only $38 million was spent on prosecuting arrested pirates, and on refurbishing jails and court rooms in Somalia and elsewhere in the region.

While the $6.9 billion that Somali piracy cost the world economy last year is a staggering amount, it is, of course, not a cost to everyone. Insurance and oil companies, as well as private security contractors, have all profited from the dangers of piracy.

More from GlobalPost: Somalia News: The origins of piracy

The UK has relatively few vessels flying its ensign, yet it is the home to ship insurers, the emerging maritime security sector, and financial institutions that transfer ransom payments. That makes Britain one of piracy’s biggest beneficiaries, raking in more than the pirates themselves according to some experts.

Pirates, of course, benefit, too. And so do the communities from which they hail, according to another study, "Treasure Mapped" by Anja Shortland of London’s Royal Institute of International Affairs.

Shortland analyzed the night-time light picked up by satellites to plot the growth of towns in Somalia and the semi-autonomous northern region of Puntland between 2002 and 2009.

“The positive impacts of piracy are widespread,” said Shortland. She concluded that the bulk of development was seen in Somalia's northern cities of Bosasso and Garowe, while the smaller coastal towns and villages appeared to miss out.

However, she argued that Somalia’s clan system meant that financial benefits were in fact spread around, helping to stimulate local markets and small industries.

Shortland said that keeping hostages provides local jobs for cooks and armed guards, with up to 100 people needed to hold captive a single vessel and its crew.

"A consistent story emerges regarding the impact of ransom money on the Somali economy,” she said. “Piracy appears to lead to widespread economic development and therefore has a large interest group behind its continuation.”

Shortland argues that rather any attempt to stop piracy must focus on the impoverished coastal communities for whom there are few economic alternatives.

Somalia is a long way from having the kind of thriving economic hub that Mombasa is to Kenya — even Mogadishu’s busy port is rundown and decrepit — but with security can come fisheries and other industries that might attract Somali men into a legal economy.