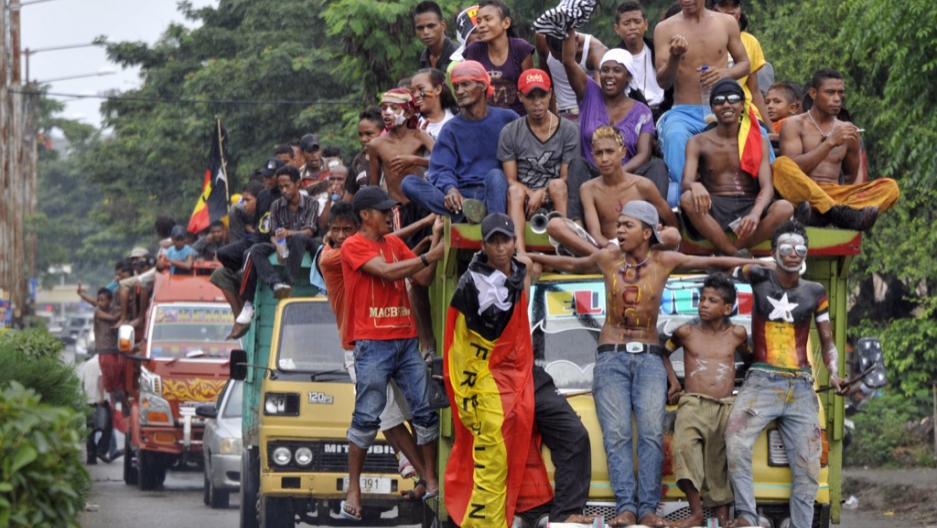 Fretilin party supporters ride in a caravan as they campaign for their presidential bet Fernando 'Lu Olo' Guterres, a former guerrilla commander, on March 14, 2012. East Timor was officially recognized as independent in 2002 after 24 years of brutal Indonesian occupation.
Credit: ROMEO GACAD
Share

DILI, East Timor — Crammed atop the roofs of honking buses, bare-chested and hands free, hundreds of young men are tearing through Dili’s streets. Doused in face paint and draped in flags, it feels like the mob mayhem of a soccer match, only it’s a political campaign – East-Timor style.

The tiny half-island nation is gearing up for its second presidential election since independence this Saturday, a key test of the nation’s political stability.

More from GlobalPost: Tibetans in Turmoil

One of the world’s newest and poorest countries, East Timon has achieved relative stability following a rocky ride after winning independence in 2002.

If the country’s elections go according to plan – the presidential on Saturday and the parliamentary in June – the contingent of just under 1,000 UN troops and some 400 Australian soldiers are scheduled to pull out of the country at the end of the year.

Apart from the firebombing of election offices this February, the campaign period has been markedly peaceful this year. But analysts say the country’s notorious martial arts groups — gangs that evolved from years of fighting against the Indonesian occupation — still pose a threat.

“Martial arts groups [are] a ticking time bomb,” says Nelson Belo, head of a local NGO Fundamahesin that focuses on security and defense.

With high rates of unemployment, low levels of education and a vacuum of opportunity, there is a danger that many of East Timor’s youth will be drawn to the country’s martial arts groups and subsidiary gangs if Timor doesn’t sort it development problems out.

Almost half of East Timor’s population of 1.1 million live in absolute poverty. The majority eke out a living from subsistence farming.

Some 20,000 are members of martial arts groups, offshoots of which wreaked havoc across the country in 2006.

“Houses were burning everywhere in Dili at the time, and people were all scared,” says Dr. Daniel Murphy who runs a free clinic that housed more than 1,000 refugees at the time.

“The bad thing is nobody ever got to the bottom of it. Nobody knew who provoked who and who did what," he says. "[E]veryone seems to have forgotten about that, but it’s not that old, people still think about what happened back then,” he says.

Evolving from clandestine resistance groups that fought Indonesian security forces during a brutal 24-year occupation, today many members of martial arts groups are members of parliament and the police force.

Jaime Lopes, a former leader of one of East Timor’s largest martial arts group PSHT was jailed for six months by UN police in 2007 for his role in the 2006 violence. Some 400 homemade weapons were found in his home. Today he runs the government’s land and property department.

The rise of a new political party Kmanek Haburas Unidade Nasional Timor (KHUNTO), which has close ties to one of Timor’s largest martial arts group KORKA, has also raised eyebrows.

“One fear among many in Timor is that martial arts groups and political parties might become more closely aligned and I think people will be watching to see what kind of party KHUNTO turns out to be,” says Cillian Nolan from the International Crisis Group.

A return to the scale of the attacks in 2006 looks unlikely right now, but a recent report from the International Crisis Group notes that there is “near-complete impunity for political violence” in East Timor.

After a spate of attacks late last year, the government has moved to suspend violent martial arts groups for one year, but the move has largely been ineffective, says Nolan.

“I think it is a concern among many in the community that some of the police don’t always play the most impartial role,” he says. “Sometimes the police are unwilling to fully investigate crimes against ... members of martial groups which the police themselves may be involved in.”

The boisterous rallies in the lead up to the election have shown it doesn’t take much to stir up emotion among the Dili’s unoccupied youth, admits Manuel Soares a senior martial arts group PSHT.

A former rebel who fought against Indonesian forces, today Soares is dressed Slipknot T-shirt and gold chain and is resting under a thatched-roof bale after a long day at the Fretilin Party rally.

“The problem is that those involved in the martial arts only know how to fight,” says Soares, who runs the PSHT’s youth wing.

“Actually we need to find a balance between the physical nature of martial art fighting and civic education,” he says.

After a murder in his village on the outskirts of Dili, he gathered everyone together in the local mosque to make it clear that such violence would not be accepted.

“There hasn’t been any murders here since,” he says, adding that martial arts groups are not all bad.

It seems the prize in the year’s election is not gold, but oil and gas, with 90 percent of the country GDP dependent on the resource.

A recent International Crisis Group report described East Timor as ''an impoverished country with a very large bank account.” The money carries a crucial test for East Timor’s government as it distributes that wealth to address the huge development challenges ahead.

Analyst Ed Rees says he is confident the upcoming presidential elections will go without a hitch this year, much like they did in 2002 and 2007. The true struggle for East Timor’s riches, he says, will be waged among legislators.

“The presidency is positioned with limited authority and as a result does not have the power to control the prize and the big prize is government,” he says.

“Whoever gets into government later on this year will control an oil fund coming on $10-billion and a monthly income of 125 to $140 million… That is the prize.”