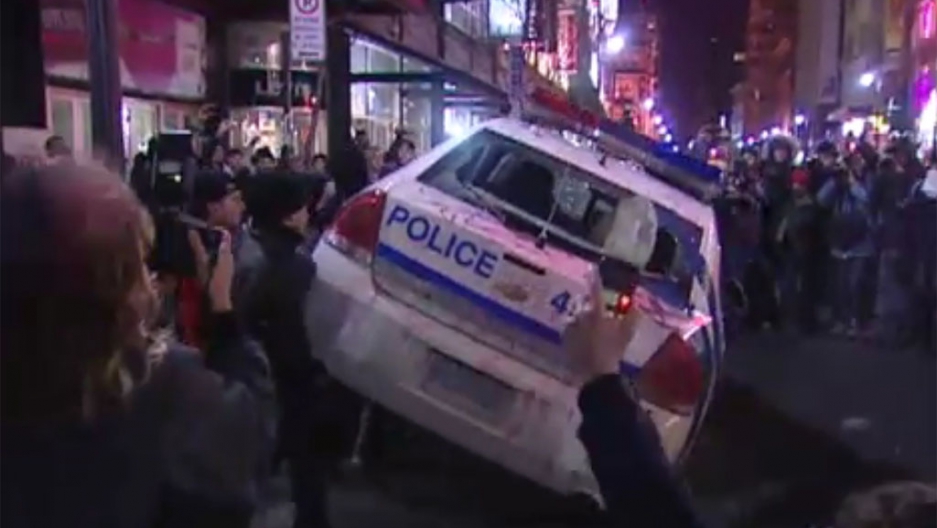 Activists overturn a police cruiser during demonstrations in Montreal on Thursday. About 150 were arrested in the 15th annual anti-police brutality march.
Credit: CBC
Share

Police were especially concerned about this year’s march – the 15th annual – because of recent clashes with students demonstrating against tuition hikes, Postmedia News reported.

There were reports of injuries by both police and activists as the scene in downtown Montreal became a surreal picture of peaceful protest and angry rioting.

One man said he tried to stop young people from throwing stones only to be hit by a tear gas canister.

The canister burnt his hair, but his ski goggles likely saved his eyesight.

He told Postmedia: “I was being peaceful and this is what they do to me?”

Scott Weinstein, a nurse, said he’s been to several of the demonstrations, and has never seen police react with such force.

“I’ve never been in a demonstration ever where police threw explosives into the crowd,” Weinstein said, according to Postmedia. “It’s a terrible path to take because these people will lose their eyes.”

“The route of the demonstration has not been provided and there exists no provision that obliges anyone to ask for a permit to demonstrate,” a statement from the group read.

They splintered into smaller groups, with some smashing windows and others locking arms in front of police.

This year’s arrests – while they may still climb – is actually about half of 2011’s total. CTV said police detained 258 people last year. The largest number of arrests came in 2004, when police took 370 into custody.