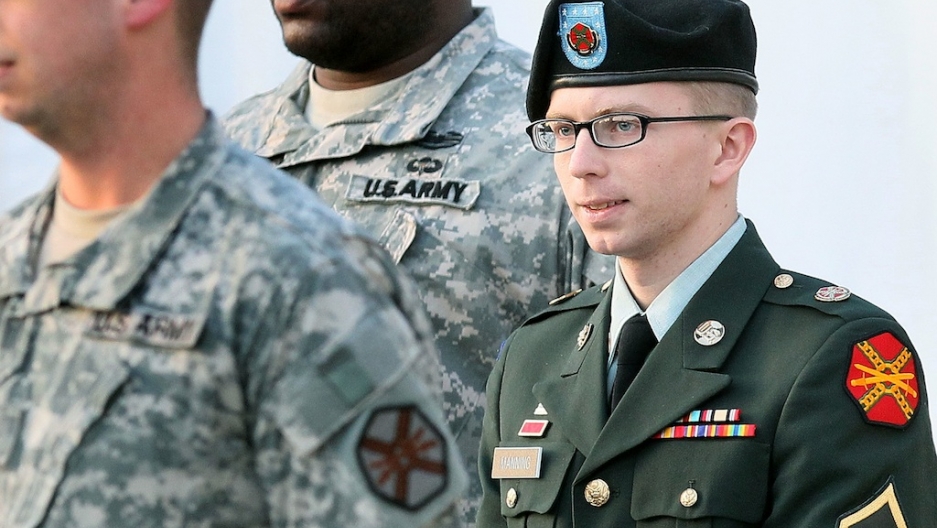 FORT MEADE, MD - FEBRUARY 23: Army Private Bradley Manning is escorted away from his Article 32 hearing February 23, 2012 in Fort Meade, Maryland. During the hearing, Manning deferred his plea to the 22 charges against him and deferred a decision over whether he wanted a military judge or a jury to hear his case.
Credit: Mark Wilson
Share

It has been over a year since Salon's Glenn Greenwald reported the inhumane treatment of Pfc. Bradley Manning in his cell in Quantico, VA.

Now, the United Nations Special Rappateur on Torture, Juan Mendez, has confirmed what many activists have been protesting since Manning's incarceration — that he was tortured by the US government.

Greenwald, who has been this country's most outspoken proponent of Wikileaks and Manning, the 24-year-old accused of leaking the massive amount of classified documents to the watchdog organization wrote in Dec. 2010, "From the beginning of his detention, Manning has been held in intsensive solitary confinement. For 23 out of 24 hours every day — for seven straight months and counting — he sits completely alone in his cell... For reasons that appear completely punitive, he's being deinied many of the most basic attributed of civilized imprisonment, including even a pillow or sheets for his bed (he is not and has never been on suicide watch.) For the one hour per day when he is freed from this isolation, he is barred from accessing any news or current events programs."

Mendez has been looking into the allegations since 2011, and in a statement to the Guardian on Monday he said, "I conclude that the 11 months under conditions of solitary confinement (regardless of the name given to his regime by the prison authorities) consitutes at a minimum cruel, inhumane and degrading treatment in violation of article 16 of the convention against torture. If the effects in regards to pain and suffering inflicted on Manning were more severe, they could consitute torture."

This after a year of protests by supporters of Manning and Wikileaks (including Pentagon Papers leaker Daniel Ellsberg and Amnesty International), the resignation of State Department spokesperson PJ Crowley and statements by David House, the co-founder of the Bradley Manning Support Network and the only friend to visit him in prison.

House was unavailable for comment, but said to Amy Goodman in a Democracy Now exclusive, "I think that I feel, as many do, that [solitary confinement and sensory deprivation] constitutes torture, yes. John McCain, the U.S. senator, has said of his time in solitary confinement that it was worse than any form of physical torture he ever had to endure."

Solitary confinement has been used for years as a tactic to protect inmates from themselves and others, and also as a special kind of punishment. But many psychologists, as well as the UN, believe it is inhumane treatment that has lasting effects on a person's psyche. Craig Haney, a psychologist and specialist on solitary confinement has said in numerous interviews that this tactic specifically can cause irreversable harm.

"For some people the actual experience of isolation is so painful that it generates an anxiety or panic reaction," Haney said in a 2009 interview with Wired magazine. "People lose their ability to control themselves. They become uncontrollably and sometimes permanently depressed in the face of this kind of treatment. Others become angry and unable to control those impulses. You also find people who suffer cognitive impairments. Their ability to process information is undermined. And it’s not clear if these skills can be brought back."

Gregg Housh, defacto Anonymous spokesperson and Bradley Manning advocate, spent time in a maximum security prison after being arrested for software piracy. He said about Manning's situation, "As someone who endured 27 straight days of solitary and considered that torture, I can't imagine what a year would do to a person. I was hallucinating by day 20."

After a run-around that spanned years and made it impossible for Mendez to see the situation for himself or speak to Manning alone without surveillance, he has released his findings. Ironically, the document [PDF] reads like something found on Wikileaks, complete with information on Saudi Arabia, Qatar and Uzbekistan. But on pages 74 and 75, the details emerge.

Before the transfer of Pfc Manning to Fort Leavenworth, the Special Rapporteur requested an opportunity to interview him in order to ascertain the precise conditions of his detention. The US Government authorized the visit but ascertained that it could not ensure that the conversation would not be monitored. Since a non-private conversation with an inmate would violate the terms of reference applied universally in fact-finding by Special Procedures, the Special Rapporteur had to decline the invitation. In response to the Special Rapporteur’s request for the reason to hold an unindicted detainee in solitary confinement, the government responded that his regimen was not “solitary confinement” but “prevention of harm watch” but did not offer details about what harm was being prevented. To the Special Rapporteur’s request for information on the authority to impose and the purpose of the isolation regime, the government responded that the prison rules authorized the brig commander to impose it on account of the seriousness of the offense for which he would eventually be charged.

The Special Rapporteur thanks the Government of the United States of America for its response to the communication dated 13 May 2011 requesting a private unmonitored meeting with Private Bradley Manning. Regrettably, to date the Government continues to refuse to allow the Special Rapporteur to conduct private, unmonitored, and privileged communications with Private Manning, in accordance with the working methods of his mandate (E/CN.4/2006/6 paras. 20-27).

Manning was held without charge, tortured because of the severity of the crime he would "eventually" be charged with, and denied the due process afforded to all American citizens.

He was formally charged Feb. 23 with 22 counts, including aiding the enemy, wrongfully causing intelligence to be published on the internet knowing that it is accessible to the enemy, theft of public property or records, transmitting defense information, fraud and related activity in connection with computers, and for violating Army Regulations 25-2 “Information Assurance” and 380-5 “Department of the Army Information Security Program.” He has a motion hearing today at Fort Meade.