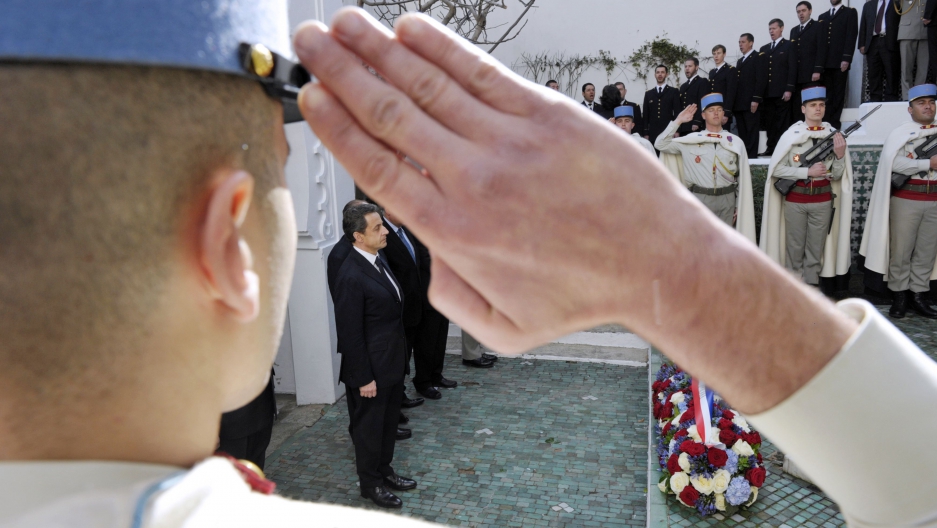 A French soldier salutes as President Nicolas Sarkozy pays tribute to Muslim war veterans who fought for France during a ceremony at the Grand Mosque in Paris on March 14, 2012.
Credit: PHILIPPE WOJAZER
Share

LONDON – Two French soldiers have been killed and a third wounded by a gunman near a military base in south-west France, police said Thursday.

The three soldiers, who were in uniform, were withdrawing money from a cashpoint in the center of the city of Montauban when a man dressed in black and wearing a motorcycle helmet opened fire, according to CNN.

City Police Commander Charles Cauqil said the two men killed were aged 24 and 26. The shooter is believed to have fled the scene on a scooter.

The attack took place close to a military base housing France’s 17th Parachute Engineer Regiment (RGP), the BBC reported. The three soldiers attacked belonged to the regiment, a Ministry of Defense spokesman said.

South-western France is home to all of the country’s elite airborne units. In recent years the 17th RGP has been deployed on operations in Afghanistan, Lebanon and the Balkans.

The army and a large number of police officers are now involved in an intensive hunt for the gunman, officials said.

Thursday’s attack follows another shooting on Sunday in which a 30-year-old soldier was shot dead by an assailant on a motorcycle in a residential area of the city of Toulouse, 46 kilometers south of Montauban, according to Sky News.

Police refused to say whether or not they believe there is a link between the two shootings. Prosecutors are reportedly considering a number of different possibilities, including that the shooting was connected to a personal dispute.